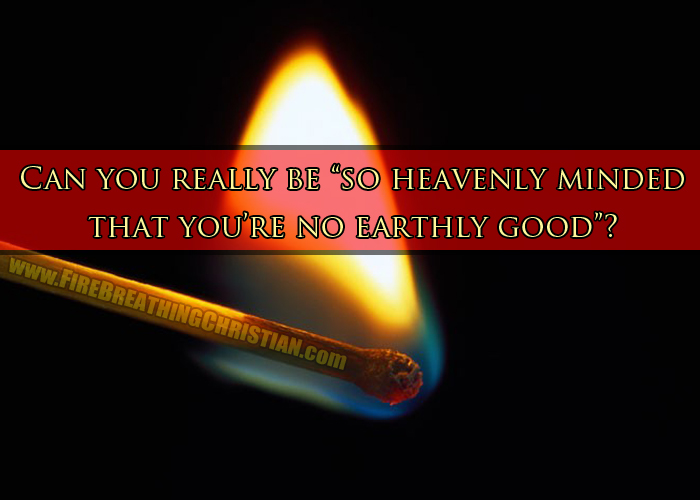 The proposition is just plain stupid.

Unless you have the typical (and quite satanic) modern American Christianese understanding of things like heaven, the Kingdom of God, the Gospel, and the Great Commission.

The modern American Evangelical take/spin/perversion of the Gospel and subsequent abandonment of the Great Commission is why we have the culture that we have now in America and throughout the West.

Because American Christians are “too heavenly minded”?

We have the trainwreck of a situation that we have now in our culture first and foremost because American Christians have come to adopt – and vigorously so – a profoundly pagan/satanic perspective on the Gospel, the Great Commission, and the Kingdom of God as they relate to (and utterly define) both the physical and nonphysical realms of creation.

We’ve become what we are now in America precisely because we have no idea what the Kingdom of God is, much less how to advance it.

We don’t even want to be heavenly minded in any true, detailed sense of the concept where it intersects with things like children’s education, law, economics, art, and business.

We don’t want to know, much less pursue, the Kingdom of God as God defines it on His terms in His Word.

We don’t want to actually see His will done “on earth as it is in heaven”.

We don’t actually want the true, comprehensive, everything-defining lordship of Christ to be studied, understood, proclaimed, and applied in detail to life here and now in “the real world”.

And that’s why such idiotic phrases as those proclaiming that one can be “too heavenly minded to be any earthly good” have become assumed truisms in our culture – a culture loaded with professing Christians who claim to love and adore Jesus.

Trough generations of slow-boiling “progress”, the enemies of Christ and opponents of His Kingdom have managed to turn even the most fundamental of truths on its head – often with the pious, comically hyper-spiritualized help of our most “conservative, Bible-preaching” of pulpits, to say nothing of the satanic children’s education systems those pulpits routinely enable.

The enemy has convinced the vast majority of people in our loud, proud, professing Christian American population that Jesus is not King over earth (in any kind of detailed sense), that His Gospel does not impact everything in His creation, and that His Great Commission, at the end of the day, simply can’t and won’t work here in “the real world”.

Back in July of last year, we asked the question: What do American Christians believe most about the Great Commission?

The answer: That it can’t be done.

Think about what that means – what it means about our credibility, our integrity, our consistency, and – most importantly – our fidelity to the Lord.

As in: Completely in command of everything.

As in, reconciling all things, visible and invisible, material and immaterial, to Himself, whether on earth or in heaven, by the power of His work on the cross:

If there’s one thing the enemies of Christ would like for you and I to believe and continue to live by, it’s that to be effective here in “the real world”, you need to set aside this whole Jesus as complete, comprehensive Lord idea.

Let Jesus be “Lord” over your spiritual life, whatever that means (and it can pretty much mean whatever you want so long as you keep it from interfering too much with real things in the real world).

Jesus can be “Lord” over your prayer life and in your prayer closet…but not over your business and political practices in detail here in the real world.

Jesus can be “Lord” over your Christian-flavored wall art and t-shirt slogans…but not over your approach in detail to children’s education, art, law, and civil government.

These are the lies that are killing us.

These are the self-serving, anti-Christ delusions that we crave and have been given over to as a people.

These are the core deceptions that we must confront and correct by God’s grace in accordance with His comprehensive, everything-defining Gospel-fueled Great Commission.

When we’re actually thinking in even a remotely “heavenly minded” way about the most basic of things, like children’s education and law, then (and only then) we’ll finally begin to see the desperately needed turnaround that so many Christians claim to want to see sweep the land.

But as long as we keep spiritualizing away the Gospel’s true and necessary impact on things like art, business, and politics, we will continue to demonstrate that we have no desire for the lordship of Christ in practice, no zeal for His Kingdom as defined on His terms in His Word, and no appetite whatsoever for His everything-reconciling, Gospel-fueled Great Commission.

So, by the grace of God and in accordance with the loving command of our Lord, let’s strive to be completely heavenly minded in every detail.

That’s His will for His people.

That’s His will for His creation (all of it).

And it will be done…on earth as it is in heaven.