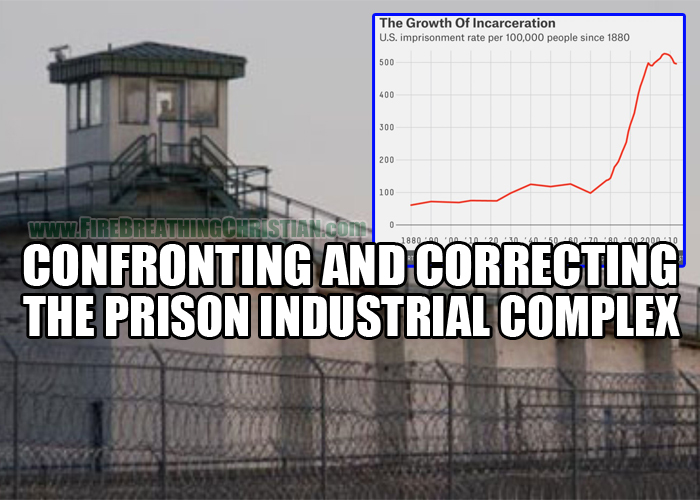 Isn’t it interesting that Scripture never even begins to advocate the use of anything remotely resembling the current American prison system when it comes to punishing criminal behavior?

Instead the perfect, sufficient Word of God offers clear standards centering on concepts like restitution – and not restitution to the State, but restitution to the one who has been done wrong. What a novel concept! God also advocates several clear-cut crimes for which there is to be a death penalty.

And all along the way, everywhere that His Word touches on the subject, nowhere do we find anything like that which we have become so comfortable with (and defensive of) here in America.

Nowhere do we find the State/Collective declared by God to be the normative end-recipient of payment made in restitution for the commission of crimes.

Nowhere do we find the State empowered to incarcerate people like animals for years and decades of use as the equivalent of slaves to be spent on whatever project the State (and/or its Corporate sponsors) deem necessary.

Yet that’s what we have now here in “the land of the free” and the home of the NSA. We have a State that, often in cooperation with private corporations, has created and financially benefits from the mass incarceration of people in the name of “law and order” – and often in association with so-called “crimes” that are nowhere in Scripture described as criminal behavior.

That’s what happens when the self-referential, self-serving opinions of man become the source of law.

That’s what happens when the Word of God ceases to be the standard by which a people define law, liberty, freedom, crime, and punishment.

And that’s what we have in America.

The American Prison Industrial Complex is a big deal.

And it’s been growing at a furious pace over the course of my lifetime (40+ years).

And many of the “crimes” sending people to the unbiblical prisons permeating “the land of the free” aren’t even crimes at all according to Scripture.

Then note that the manner in which “We the People” are aiming to “correct” and “reform” the people we place in these prisons is antithetical to the methods of correction and reformation clearly and lovingly revealed to us by God in His Word.

And we wonder why things aren’t working out so well?

We dare to wonder why the prison system isn’t exactly known for successfully correcting and reforming the more hardened criminals that we claim to want corrected and reformed? (Said system does, however, have a well established reputation for creating and proliferating more and more such hardened criminals, of course.)

We wonder why society isn’t profiting from this arrangement, even after pouring so much time, energy and resources into it?

While people, families, and society in general might not be profiting from this system, you can be sure that there are those who are profiting greatly from the implementation and endless expansion of this wildly unbiblical approach to crime, punishment, and control.

First off, the State is profiting in every way that an anti-Christian civil governmental force could hope to profit. For example, the State gains massive amounts of funding and control through the promotion of unbiblical approaches to crime and punishment. The State also scores an increasingly fearful and submissive public population as a result of the establishment of a massive prison industrial complex.

So the anti-Christian State is a big winner here.

Another winning group is the gaggle of private companies and corporations who are in the prison business.

That’s right, prison business, as in: A business with an obvious interest in seeing to it that more people are convicted of crimes (true biblical crimes or otherwise) and are then incarcerated in an unbiblical prison to serve out unbiblical sentences in which they pay the State in the form of time and/or labor for the “crime” they’ve committed.

See how one unbiblical criminal enterprise being enabled under the cover of State legitimization leads to all sorts of raping, pillaging, and looting in the name of “law and order”?

People and families are routinely ransacked, pillaged, and ruined by these State-sanctioned systems, leaving the State and its Corporate backers increasingly enriched and empowered.

To help get a little extra perspective here, consider the following snippet from a Forbes article entitled Confronting a Prison-Industrial Complex:

Ah, if only we were as free as the Russians!

In this context, we’re not even close to Russian levels of non-incarceration.

But there are few statistics or even biblical truths that most Americans are willing to use in testing what has become one of many cherished American Idols. The Prison Industrial Complex in all of its anti-Gospel glory has become an untouchable golden calf for even the majority of self-identified conservative Christians in the land.

The Forbes article continued, noting how hard it will be to confront and correct this particular beast:

“. . . it will not be easy to counter the prison-industrial complex.  There is always the human impulse to want to punish detestable behavior, even if  the lingering threat from the miscreant is minimal. And there is now a huge and organized lobby, primarily of  guards and others whose livelihoods are sustained by prisons, to fight any legislative pullback.”

Even (and in America, especially) fake money like the US Dollar.

Here again we see clearly how the whole System of systems now defining American life and culture is sustained and enabled by the black magic of fiat currency.

Until we repent of the satanic approach to economics that fuels the many tools of Statism, beasts like the Prison Industrial Complex will continue to feed and destroy.

Until we seek true correction and reformation of our approach to law, education, freedom, and liberty in accordance with the Gospel-fueled Great Commission, we will continue to find each successive generation of Americans more lawless, ignorant, and imprisoned than the last.