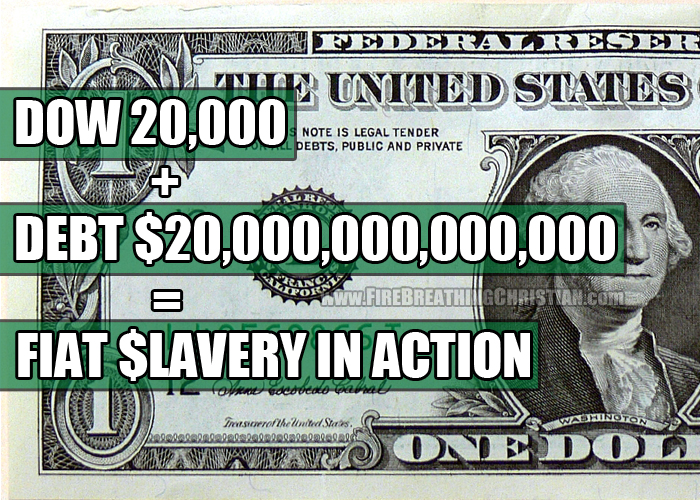 How awesome is that?!

How much does that prove the strength and general awesomeness of the American economy?!

Well, not a lot, actually.

And make no mistake: The former is directly linked to the latter.

The primary reason that stocks are soaring is that the (Too Big To Fail) powers-that-be atop the fiat economic system under which we (temporarily) live have decided to magically create more and more and more fake money out of thin air so that asset bubbles (like stock and home values) can be artificially inflated, re-inflated, or otherwise propped up in order to preserve the illusion of real wealth, prosperity, and a hopeful tomorrow.

A purposeful lie propagated by the few who, through the dark art of fiat economics, practically manage to own and control everyone and everything beneath them. (See also: Fiat $lavery: We have been bought and paid for…with nothing.)

To help provide some added clarity on this, ZeroHedge posted a neat little article recently chronicling the relationship between Dow 20,000 and Debt $20,000,000,000,000, which included the following:

The Dow Jones Industrial Average provides us with some pretty strong evidence that our “stock market boom” has been fueled by debt.  On Wednesday, the Dow crossed the 20,000 mark for the first time ever, and this comes at a time when the U.S. national debt is right on the verge of hitting 20 trillion dollars.

Is this just a coincidence?  As you will see, there has been a very close correlation between the national debt and the Dow Jones Industrial Average for a very long time.

For example, when Ronald Reagan took office in 1991, the U.S. national debt had just hit 994 billion dollars and the Dow was sitting at 951.  And as you can see from this chart by Matterhorn.gold via David Stockman, roughly that same ratio has held true throughout subsequent presidential administrations…

During the Clinton years the Dow raced out ahead of the national debt, but an “adjustment” during the Bush years brought things back into line.

. . . Our “prosperity” has been fueled by the greatest debt binge in the history of the world, and we are greatly fooling ourselves if we think otherwise.

We would never have gotten to 20,000 on the Dow if Barack Obama and Congress had not gotten us into an extra 9.3 trillion dollars of debt over the past eight years. . .

Hopefully the good times will continue to roll for as long as possible.

But there is no possible way that they can keep going indefinitely.

For decades, our debt has been growing much faster than our GDP has.  By definition, this is an unsustainable situation.  At some point we will have accumulated so much debt that our financial system will no longer be able to hold up under the strain.

Many were convinced that we would reach that point before the U.S. national debt hit 20 trillion dollars, and yet here we are.

So how much higher can we go before the bubble bursts?

That is a very good question, and I don’t know if anyone has the right answer.

But for President Trump, this is going to present him with quite a dilemma.

Either he can keep the debt party going for as long as possible, or he can try to get us to take some tough financial medicine right now.

If an attempt is made to deal with our debt problems now, we will experience severe economic pain almost immediately.

But if the can keeps being kicked down the road, our long-term prognosis is just going to keep getting worse and worse.

And if we try to delay the inevitable indefinitely, at some point the laws of economics are going to make our hard choices for us.

And where are these “laws of economics” to be found?

The real ones, I mean. The true and unbreakable laws of economics at a foundational level.

In the perfect and sufficient Word of God, of course.

So where do we need to go in order to prepare for the inevitable crash of the “unsinkable Titanic” that is the current (albeit temporarily) ruling economic construct in America and throughout the world? (See also: Why our economic Jenga Tower Of Babel must fall.)

Where do we go to build what comes after its fall?

We go to our Lord, of course.

We go to His Word…His perfect, sufficient Word.

He’s given us all that we need to avoid the slavery, darkness and despair that inevitably flows from satanic approaches to economics (or anything else).

May God give His people the grace to repent and submit to His loving, life-giving Word on economics and everything else…while there is yet time.