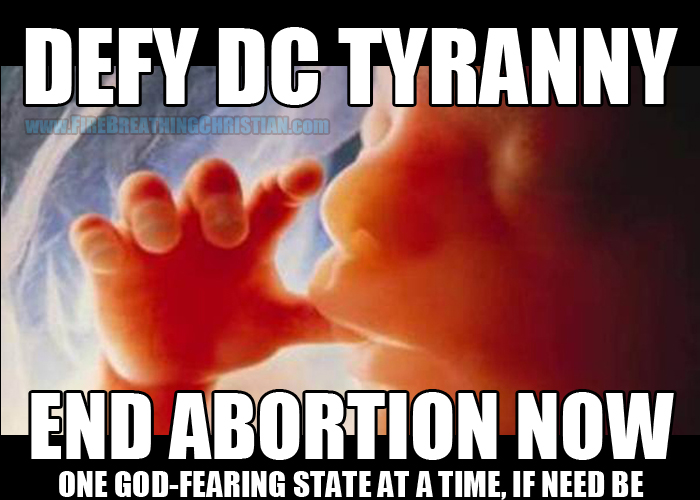 Before diving too deep into that one, check out this report from CBS Los Angeles earlier this week, which began as follows (with bold emphasis added):

The legislation is scheduled for its first public hearing Tuesday as the Senate rushes to enact measures that Democratic lawmakers say would protect immigrants from the crackdown that the Republican president has promised. . .”

Which means the people proposing this change are serious.

They seem to be under the impression that some things are actually worth standing up for, even if the cost might be great.

What a novel concept.

They’re willing to take that stand over immigration…while hundreds of little baby Californians are openly sacrificed each and every day in easily identified mass murder facilities all across the land.

Interesting, is it not?

What people will stand and fight for, I mean.

But hey, at least they’ll stand and fight for something.

As opposed to those who will never even contemplate the righteous open defiance of lawless, anti-Christ governments above them, no matter how heinous, evil, and flat out demonic said governments’ policies may be. (For more on this, check out 51,000,003 reasons why America owes Nazi Germany an apology.)

Lest there be any confusion, this post is in no way aimed at addressing the validity of said immigration policies; our focus here is on the commitment of some of those taking a hard stand against Washington DC on immigration. With that important clarification noted, let’s consider the following:

What if American Christians actually stood and advocated that their home states shut down the child sacrifice system regardless of what DC thought or said on the matter?

What if American Christians respectfully but clearly advocated that their home state’s law enforcement be directed to disregard any DC-spawned proclamations or policies that in any way enable the mass child sacrifice system operating now in their land?

What if just one American state loaded with professing Christians would actually stand and say no to child sacrifice in such a manner, regardless of any threat from DC?

What if just one professing Christian Governor of a single American state would stand firm for the children being murdered by the boatload each and every day?

What if one Governor in one state had the loud and clear backing of the pastors, churches, and Christians in the land and was given by them a clear mandate to actually end child sacrifice right now?

What if just one county and one Sherriff would take such a stand?

How much of a cultural turnaround might they ignite?

Something to think about…and pray for…