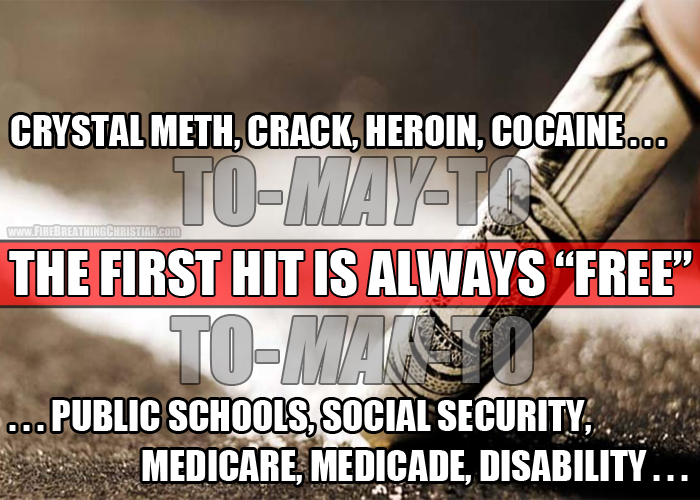 Socialism, like other mind-altering drugs, is very marketable. It’s an easy sell.

And the first hit is always “free”.

And like those pimping these programs’ crack, meth, and cocaine counterparts, the purveyors of American Socialism are all about doing whatever it takes to get us hooked to the point of dependence.

Which is exactly where we are now in America.

And by “we”, I mean most self-identified conservative Christians in the land.

American conservative Christians have become some of the most dependent upon, and therefore the most passionate defenders of, everything from public schools and Social Security to Food Stamps and Medicare.

This sad-but-true situation is one of many ugly truths that God has once again graciously brought to light in dramatic fashion, this time by way of the immigration debate presently dominating political conversation.

There’s much talk of walls, deportations, crackdowns and the like from “conservatives”, yet precious little if any mention of ditching (and I mean completely ditching) the Socialism that has made us a magnet to people who otherwise wouldn’t bother sneaking in.

We want walls to protect our Socialism from those people.

We must preserve our precious “benefits” as American Socialists from the unwashed hordes that would come in and “abuse” it.

You see, we’ve empowered our government to steal the property of our neighbor and give the loot to us in any number of ways for a very long time now here in America, and we’re not about to share that loot with a bunch of people acting so [*cough* *cough*] lawlessly as to not even have the decency to go through our immigration system before proceeding to have the American State steal what they covet of their neighbors’ property.

See how utterly stupid and wildly unbiblical this whole mess is?

Yet that’s exactly what’s going on here. There are other things going on here too where the immigration issue is concerned, but make no mistake, the preservation and protection of American Socialism is at the tippy top of the heap.

You think this might be an overreaction on my part?

Am I perhaps exaggerating?

For those who think that might be the case, I respectfully request that you consider the following:

Would most American “conservative Christians” give up their favorite Socialist programs in order to fix our immigration problems?

Would they give up public schools, which are funded through the confiscation and redistribution of wealth (aka “theft”) in order to perpetuate an explicitly anti-Christ system of children’s education?

Would they give up the ludicrously Socialist (and scammy) Social Security program?

Would they give up Medicare?

Would they give up Medicaid?

Would they give up disability payments and food stamps and the rest of the giant Orwellian Nanny State that we now have dominating and dictating the terms of life for most here the “land of the free” and the home of the NSA?

And probably not ever, barring a God-given supernatural wave of repentance and submission to Christ sweeping the land (which I hope, pray and work for daily). As things stand now, it seems all but assured that the only way in which even most American “conservative Christians” will openly repudiate and finally ditch the anti-Christian welfare state is when the artificial economic system propping the whole nightmare up finally collapses under the weight of God’s Law on matters of economics and civil government, leaving people forced to pursue alternative options.

While that collapse will happen, until it does, the vast majority of Americans – including most professing conservative Christians – will do anything but repent, repudiate, and turn away from the “help” that they think they “need” from the almighty American State.

That’s what happens when a “Christian” subculture is dominated by 501(c)(3) State-licensed promoters of a weak little counterfeit Jesus and an impotent, apathetic, culture-surrendering counterfeit gospel.

After generations of “free” public schools enabled and even encouraged by these State-licensed “pastors”, look what we’ve become.

We’re the dried up, despondent, toothless twenty-something former beauty queen who now looks like a haggard, high-mileage zombie after embracing the “freedom” offered through that first “free” hit of meth or crack or, in our case, public schools and other “help” from the State.

And the only way we’re coming back from that near-dead state, if we are to come back at all, is to surrender to our brokenness, repent unconditionally, and beg at the feet of Jesus for Him to bring us back to life through the perfect, sufficient answers lovingly provided in His Word.

We have to stop fearing the loss of America.

We have to stop fearing the loss of our jobs, our stuff, and our status.

We have to stop fearing the loss of [insert American Socialist program here].

And we have to start fearing the Lord.

That’s what the true Gospel command to repent means: Our complete surrender and complete submission to His complete lordship in every detail of every area of life.

That’s what He equips His people to do, all by His grace and all for His glory.

Until He graces us with that brokenness, repentance, and desire to embrace His life-defining Gospel, we’re just dead men walking, looking for another hit.