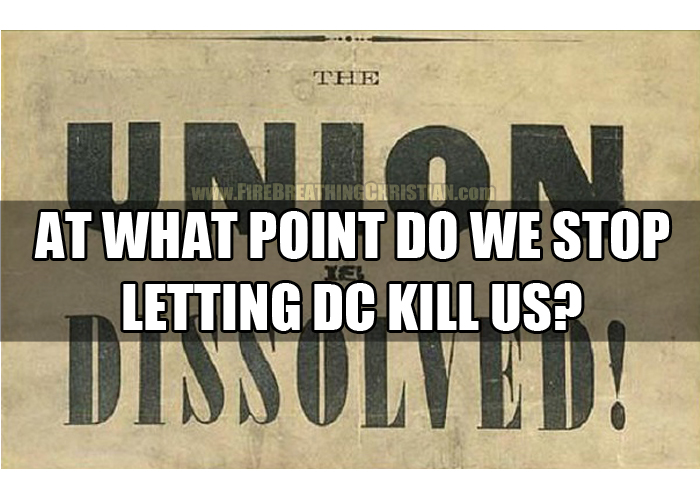 If your answer is “NEVER!” accompanied by some version of “How could you even consider seriously considering such a thing?!”, then you are a cultist.

For the non-Americultists out there, the question – and it is an important one – stands:

How about at the point DC enforces a policy of open, systematic, “legal” child sacrifice?

That’s been going on for decades. We’re apparently not willing to stand against the America Idol over that one.

What about the DC-imposed obliteration of marriage and the DC-enforced imposition of “gay marriage” across the land?

Nah, we won’t cut ourselves loose even after that.

The bottom line seems to be, for now anyway, that we’re way too thoroughly programmed, pimped out, and dependent on the DC-centered American Welfare/Warfare State for us to even consider severing the chains that we’ve come to love and depend upon.

But for more and more people, the question is building.

If we won’t break up the DC-centered State now, when will we?

What would push us over the line?

What would force us to finally say “no” and “goodbye” to American Statism?

There has to be a line somewhere, doesn’t there?

If not, we really are slaves, aren’t we?

We really are the most desperate and pathetic sort of cultists.

But if there is a point at which most of us can agree that secession or some other sort of solid, complete separation from DC power would become necessary, shouldn’t we be thinking now about what that point actually is?

Now consider this: What if, after beginning this thought process in a serious manner (many of us for the first time), we came to realize that the hard, impassable lines that we should set for secession or some similar thing were actually lines that were passed long ago by DC?

What if we came to realize that DC-imposed child sacrifice, “gay marriage”, and gender obliteration were more than enough to warrant – and even require – our leaving the DC-fueled anti-Christian empire?

What if along the way we realized that we actually should have broken up this DC beast a very long time ago?

In order to help with this thought process, I want to share with you now another excellent article from the Mises Wire, simply titled Break Up the USA.

“Some of our assumptions are so deeply embedded that we cannot perceive them ourselves.

Case in point: everyone takes for granted that it’s normal for a country of 320 million to be dictated to by a single central authority. The only debate we’re permitted to have is who should be selected to carry out this grotesque and inhumane function.

Here’s the debate we should be having instead: what if we simply abandoned this quixotic mission, and went our separate ways? It’s an idea that’s gaining traction — much too late, to be sure, but better late than never.

For a long time it seemed as if the idea of secession was unlikely to take hold in modern America. Schoolchildren, after all, are told to associate secession with slavery and treason. American journalists treat the idea as if it were self-evidently ridiculous and contemptible (an attitude they curiously do not adopt when faced with US war propaganda, I might add).

And yet all it took was the election of Donald Trump for the alleged toxicity of secession to vanish entirely. The left’s principled opposition to secession and devotion to the holy Union went promptly out the window on November 8, 2016. Today, about one in three Californians polled favors the Golden State’s secession from the Union.

In other words, some people seem to be coming to the conclusion that the whole system is rotten and should be abandoned.

It’s true that most leftists have not come around to this way of thinking. Many have adopted the creepy slogan “not my president” – in other words, I may not want this particular person having the power to intervene in all aspects of life and holding in his hands the ability to destroy the entire earth, but I most certainly do want someone else to have those powers.

Not exactly a head-on challenge to the system, in other words. (That’s what we libertarians are for.) The problem in their view is only that the wrong people are in charge.

Indeed, leftists who once said “small is beautiful” and “question authority” had little trouble embracing large federal bureaucracies in charge of education, health, housing, and pretty much every important thing. And these authorities, of course, you are not to question (unless they are headed by a Trump nominee, in which case they may be temporarily ignored).

Meanwhile, the right wing has been calling for the abolition of the Department of Education practically since its creation in 1979. That hasn’t happened, as you may have noticed. Having the agency in Republican hands became the more urgent task.

Each side pours tremendous resources into trying to take control of the federal apparatus and lord it over the whole country.

How about we call it quits?

No more federal fiefdoms, no more forcing 320 million people into a single mold, no more dictating to everyone from the central state.

Radical, yes, and surely not a perspective we were exposed to as schoolchildren. But is it so unreasonable? Is it not in fact the very height of reason and good sense? And some people, we may reasonably hope, may be prepared to consider these simple and humane questions for the very first time.

Now can we imagine the left actually growing so unhappy as to favor secession as a genuine solution?

Here’s what I know. On the one hand, the left made its long march through the institutions: universities, the media, popular culture. Their intention was to remake American society. The task involved an enormous amount of time and wealth. Secession would amount to abandoning this string of successes, and it’s hard to imagine them giving up in this way after sinking all those resources into the long march.

At the same time, it’s possible that the cultural elite have come to despise the American bourgeoisie so much that they’re willing to treat all of that as a sunk cost, and simply get out.

Whatever the case may be, what we can and should do is encourage all decentralization and secession talk, such that these heretofore forbidden options become live once again.

I can already hear the objections from Beltway libertarians, who are not known for supporting political decentralization. To the contrary, they long for the day when libertarian judges and lawmakers will impose liberty on the entire country. And on a more basic level, they find talk of states’ rights, nullification, and secession – about which they hold the most exquisitely conventional and p.c. views – to be sources of embarrassment.

How are they going to rub elbows with the Fed chairman if they’re associated with ideas like these?

Of course we would like to see liberty flourish everywhere. But it’s foolish not to accept more limited victories and finite goals when these are the only realistic options.

The great libertarians – from Felix Morley and Frank Chodorov to Murray Rothbard and Hans Hoppe — have always favored political decentralization; F.A. Hayek once said that in the future liberty was more likely to flourish in small states. This is surely the way forward for us today, if we want to see tangible changes in our lifetimes. . . “

And something to encourage others to think about.

It’s way past time that we got in gear on this, so let’s start asking and answering important questions that we’ve been programmed to ignore and avoid for far too long.