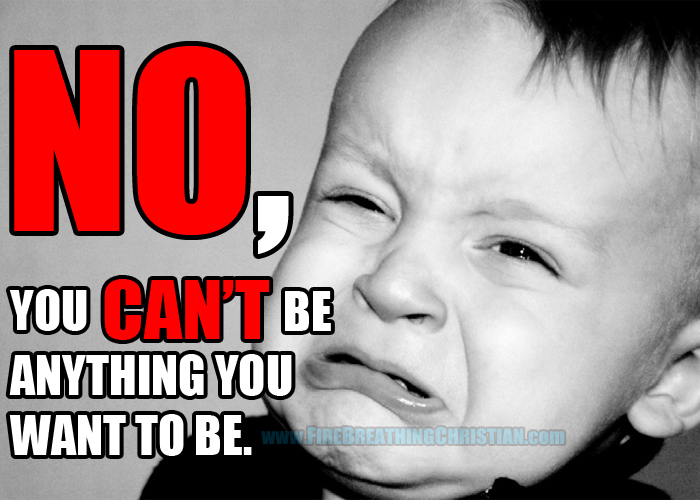 Yet while we shouldn’t be surprised, most of us are, which, in and of itself, tells us a whole lot about why our culture is going to hell on a rocket.

So what’s the deal here?

Why we have boys who think they can be girls?

Why do we have girls who think they can be boys?

And men who think they’re women?

And women who think they’re men?

Because we told them they could be anything they wanted to be.

And they simply believed us.

Then, when they believed us and acted accordingly, we were way too weak, cowardly, and accommodating to dare confront and correct the profound delusions budding in the minds of countless Precious Snowflakes in our midst – Precious Snowflakes who have gone on to redefine the culture in light of their thoroughly satanic, thoroughly irrational approach to reality.

Put another way, they noticed that we had no appetite for the Word of God as our standard, and they acted accordingly.

They called our bluff.

They noticed that we weren’t serious about anything remotely resembling the notion of Christ as King in our approach to much of anything in detail, so they picked up the ball that we dropped and ran with it.

While we look on in comical “shock” and “horror”.

For some clarity on the ludicrous nature of our self-imposed cultural implosion, consider the following from our Maker and Owner:

There is a way that seems right to a man, but its end is the way to death.

Every way of a man is right in his own eyes, but the Lord weighs the heart.

For the wrath of God is revealed from heaven against all ungodliness and unrighteousness of men, who by their unrighteousness suppress the truth. For what can be known about God is plain to them, because God has shown it to them. For his invisible attributes, namely, his eternal power and divine nature, have been clearly perceived, ever since the creation of the world, in the things that have been made. So they are without excuse. For although they knew God, they did not honor him as God or give thanks to him, but they became futile in their thinking, and their foolish hearts were darkened. Claiming to be wise, they became fools . . .

Therefore God gave them up in the lusts of their hearts to impurity, to the dishonoring of their bodies among themselves

God gave them up to dishonorable passions. For their women exchanged natural relations for those that are contrary to nature; and the men likewise gave up natural relations with women and were consumed with passion for one another, men committing shameless acts with men and receiving in themselves the due penalty for their error. . .

And since they did not see fit to acknowledge God, God gave them up to a debased mind to do bwhat ought not to be done. They were filled with all manner of unrighteousness . . .

You and I, as God’s created property, can only be what He will have us to be, on His terms in accordance with His Nature as defined in His Word.

That’s the reality in which we all live, and we shouldn’t want it any other way.

“You can be anything you want to be” is a lie.

It’s a lie that we love in America.

“We the people” love the thought that we define freedom, liberty, law and everything else in life on our terms as we see fit (with the occasional sprinkling of vague Christian lingo around to cover our religious bases, of course).

Until we recognize and repent of this fundamentally insane approach to God’s creations of life, liberty, freedom, gender and everything else, we’re destined (and deserve) to be swept away in judgment from the face of His earth…as is happening now, one perversion of liberty at a time.