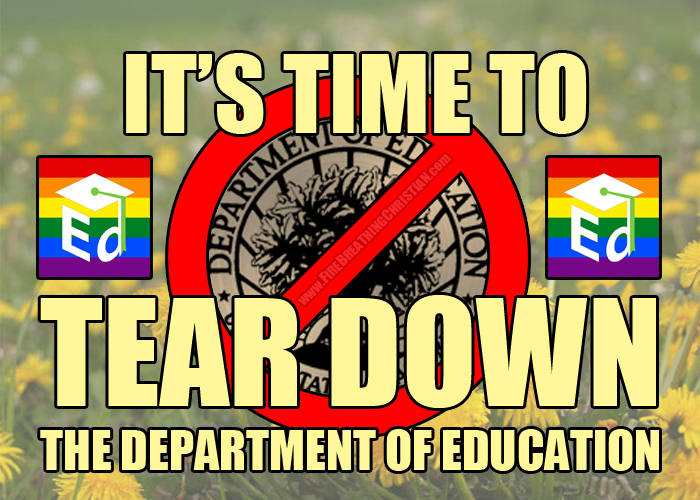 He thinks big, talks tough, and actually seems to believe in the inevitability of his victory. His gaggle of hangers-on and yes-men cheer him on and bask in the glow of his largeness, toughness, and perceived inevitability.

The modern State-run “education” system is a lot like Goliath.

It thinks big in that it claims authority over every subject of study in God’s creation, it talks tough through its perpetual proclamations and ceaseless waves of “new plans” to better mold the minds of the young, and it actually seems to believe its own comically idiotic press releases. But the modern State-run education model is perhaps most like Goliath in that it’s about to go down.

God is even now raising up a remnant who will pursue Him as the necessary beginning of knowledge in every area of life and realm of His creation (Proverbs 1:7; Colossians 1:15-20). He’s not only raising up a people who seek to do this (all by His grace and all for His glory), He’s also raising up technologies and tools the likes of which were sci-fi fantasy just a generation or two ago.

Old, decrepit, dinosaur models of education are proudly trudging along, oblivious to their own zombiness and the fact that they’re shambling toward their own long prepared graves.

Massive, centrally controlled systems built around giant brick and mortar complexes managed by armies of bureaucrats and “professionals” are building ever larger complexes and adding layer upon layer of “experts”, oblivious to the fact that their ginormous System of systems is teetering on the edge of a very high cliff.

That’s the Big Idea behind the third annual Great Education Forum, which takes place this Saturday (April 29) at the New Geneva Christian Academy in Appomattox, Virginia.

I will be presenting on the satanic foundation of public schools (based on Genesis 3) at 1 p.m. (Eastern Time). Admission is free.

Rev. Dr. Paul Michael Raymond, Rev. E. Ray Moore, historian Bill Potter, and Kevin R. Novak of Deconstructing the Coliseum will be presenting as well. I am very much looking forward to learning from these men. It’s gonna be a blast – an encouraging, equipping, and (most importantly) God-glorifying blast!

For those of you who’ve been following the flow of activity here at Fire Breathing Christian, you know that education is something of a drumbeat theme here. So it should come as no surprise that I’m totally jazzed about this event and opportunity.

Those of you who keep up with things here also probably know that my day gig (in the Tennessee State General Assembly) has me insanely busy during Session, which runs from mid-January to mid-May this year. As such, I haven’t had the opportunity to post as much as I plan to in the off-Session season, and I greatly appreciate your patience in that regard, particularly as I use much of what time I do have available to prepare for this weekend’s event.

This week’s posts at FBC will be very education themed as I ramp up for Saturday.

Your prayers and support as I prepare and make the trip out to Virginia are more appreciated than you can know.

I hope to see many of you at the event this weekend and I look forward to sharing more details before, during, and after the weekend.

In the meantime, keep praying and keep fighting for King and Kingdom, all by His grace, all for His glory, and all to the eternal benefit of His people!

The Philistine said to David, “Come to me, and I will give your flesh to the birds of the air and to the beasts of the field.” Then David said to the Philistine, “You come to me with a sword and with a spear and with a javelin, but I come to you in the name of the Lord of hosts, the God of the armies of Israel, whom you have defied. This day the Lord will deliver you into my hand, and I will strike you down and cut off your head. And I will give the dead bodies of the host of the Philistines this day to the birds of the air and to the wild beasts of the earth, that all the earth may know that there is a God in Israel, and that all this assembly may know that the Lord saves not with sword and spear. For the battle is the Lord‘s, and he will give you into our hand.”

When the Philistine arose and came and drew near to meet David, David ran quickly toward the battle line to meet the Philistine. And David put his hand in his bag and took out a stone and slung it and struck the Philistine on his forehead. The stone sank into his forehead, and he fell on his face to the ground.