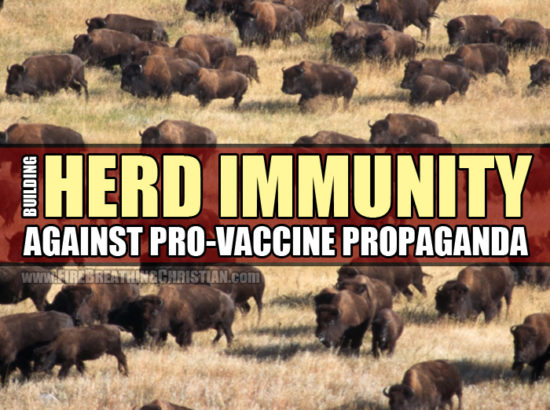 Wherever one stands on vaccines, and however firmly they may hold their position, we should all be teachable. We should all want to learn. We should all seek to be better informed so that we can make better decisions.

Herd Immunity is a term that is bandied around in defense of mass and mandatory vaccination. What is it and why is it important?

Let’s set out a working definition of what Herd Immunity is at a functional level in the population: Herd Immunity is the presence of adequate immunity within a population against a specific infection that operates to protect those at high risk of serious infection and consequently, reduce morbidity and mortality from that infection.

Now let’s separate out Herd Immunity, comparing what it meant in the pre-vaccine era compared with what it means in the vaccine era, using specific infections as examples.

Let us look at an example of how natural Herd Immunity operated to provide age-appropriate immunity.

Mumps vaccine does not work. Protection is way below the 96% claimed by Merck and mumps epidemics are occurring worldwide in highly vaccinated populations. Merck is accused of fraudulently misrepresenting the efficacy of their mumps vaccine in order to protect their US monopoly on the MMR vaccine. I would suggest that everyone who has suffered mumps and particularly its complications despite mumps vaccination, has a valid legal claim against Merck.

Mumps vaccine failure is associated with inadequate immunity following vaccination (primary failure) and rapidly waning immunity after vaccination (secondary failure). These factors mean that populations are at greater risk as they grow older. Since severe side effects are more common in mature males, mumps vaccine has made mumps a more dangerous disease.

Natural Herd Immunity, that is, lifelong immunity following exposure of children to mumps in the pre-vaccine era, has been destroyed by mumps vaccination.

The chickenpox virus (varicella zoster) causes a mild self-limiting disease in healthy children. The virus frequently establishes latent infection in the cell bodies of sensory nerve roots where it has the potential to episodically reactivate and cause shingles, a very painful and debilitating condition. Shingles can cause blindness. Historically, shingles was an uncommon disease occurring in, for example, people with immune deficiency due to cancer or immunosuppressive drug therapy.

Reactivation of zoster is inhibited by an adequate level of immunity to this virus which, in turn, is maintained by boosting of immunity in parents and grandparents by re-exposure via children with chickenpox. Natural epidemics of chickenpox maintained Herd Immunity by ‘wild-type boosting’ (referring to the natural virus) of adults which prevented shingles in otherwise healthy individuals. This is no longer the case.

Widespread chickenpox vaccination has removed natural Herd Immunity by preventing epidemics, eliminating ‘wild-type’ boosting, and allowing immunity to fall in individuals to the point where shingles is now much more common, occurring in young, apparently healthy people. Vaccination has created a new epidemic to which Merck’s response is, ‘we’ve created a market; now let’s make a vaccine to prevent shingles.’

I hope that this information is helpful.

Please check out Vaxxed if you haven’t already. (And remember: it’s free to view online for those with Amazon Prime.)