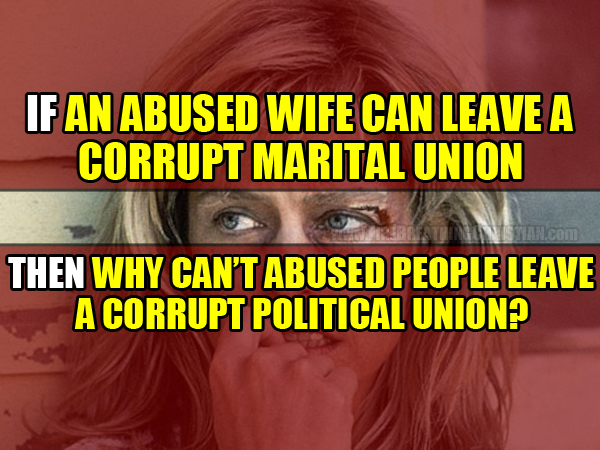 They love to make “the rules”. Once given the ability to make those rules, they love to abuse through them.

So it should come as no surprise that one of the most cherished and relentlessly promoted “rules” of abusers is that their power is indissoluble and indivisible.

This works for both the garden variety individual abuser like a wife-beating husband just as well as it works for a large scale system of State power headed by elites who wish, above all else, to convince the masses that their power over said masses is inviolable. On the nation-state level, this is why the Socialism-promoting Pledge of Allegiance was written and deployed in the late 1800s by the Socialist Frances Bellamy.

From the perspective of the abuser, it is of utmost importance that their victim(s) not only surrender to, but ultimately embrace and even celebrate the notion that there is no escape.

Their union with the abuser above them is permanent.

It’s also what Brussels wants members and citizens of the European Union to believe and what Madrid desperately wants citizens in its (temporary?) province of Catalonia to believe right about now.

They both desperately want their victim(s) to believe three things:

There are many more similarities between small and large scale abusers, and we may explore more of them in depth in future posts, but you get the basic idea: Abusers are generally power-mad habitual liars who will only squeeze tighter when their power base is threatened.

Which brings us neatly back to the idea of the dissolvability of power and the dissolution of unions.

If that most cherished and essential of institutions, marriage, is one which we allow to be dissolved in certain instances, then why not political unions?

Why not European states?

Why not American states?

Why not provinces in Spain?

Why is the notion of people freely choosing to dissolve what they deem to be destructive political unions above them an unthinkable and unallowable thing?

Why has such a laughably idiotic notion as the indivisible power of political states taken such deep root in the consciousness of even the most so-called conservative of Americans, even while the notion of easy divorce within marriage for no reason at all has become a given?

Because we have been conditioned to value The State far above family and marriage, that’s why.

And who’d been doing this conditioning?

Why the American State, of course, through the State-run “education” systems by which it promotes, among other things, a Socialist-written pledge to the indivisible power of the State.

That’s why good little American patriots do not question the indivisible power of the American State, even as they accept the easy dissolution of marriage, family, gender and pretty much everything else necessary to a healthy culture and civilization.

In this, we’ve become a pathetic gaggle of battered housewives, championing the power and inescapable authority of the abusers above us.

May God grace us with the desire, ability, and opportunity to stand up to this madness.