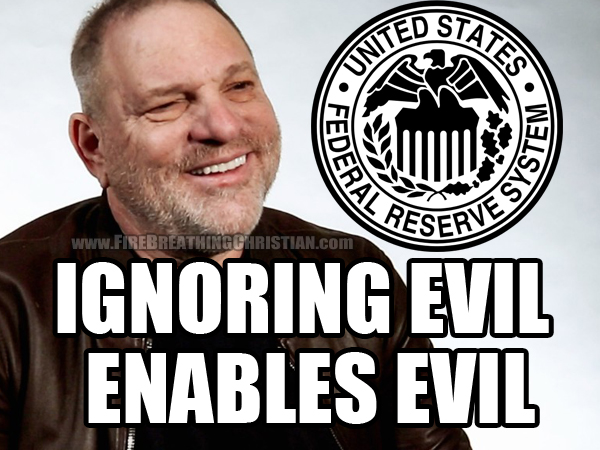 Thanks to God’s grace through Harvey Weinstein, we’ve gotten a reminder: You can pretend that up is down and wrong is right for a while – maybe even a very long while – but eventually the gig is up. Eventually reality crushes any fantasy built on an unbiblical foundation.

Even so, we’re a people prone to pretending and propping up all manner of anti-Christ constructs, hoping that tightening our blinders every now and then will be enough to get us by. We like (and are encouraged) to believe that if we just pretend hard enough and long enough, we can and will outlast any reality-based threat that might come along.

This is why now we have, for example, things like public schools and Social Security – both overtly Marxist/anti-Christian constructs – as cherished institutions by most self-identified “conservative Christians” in the “land of the free” and the home of the NSA.

When even the Republican Governor of a supposedly conservative state like Tennessee can openly state (and consistently govern as though) “The only reason government exists is to buy things for people that they can’t buy themselves.”, we get an unvarnished and unhidden look at just how thoroughly Marxist we’ve become…and that’s on the Pagan Political Right. (Which only goes to prove yet again another uncomfortable reality that American “conservatives” love to ignore in political practice: The Pagan Political Right Wing and Left Wing are two wings of the same dragon.)

But as God through Weinstein has shown us, this long running self delusion can and will ultimately flame out, likely in dramatic fashion.

One day it will end.

The bubble (or bubbles) will pop.

Reality will win out, as it always does in God’s creation.

And when it does, we will be forced to acknowledge that the satanic economic construct that we used to fuel the many satanic programs, systems, and wars that we’ve come to adore in America was always a vile and disgusting thing – it was always a tool of bondage and death.

The “it” in question here is our fiat economic system – the system by which we pretend that it’s somehow legitimate to give a handful of people the power to create magic “money” out of thin air while the rest of us literally spend our lives chasing after whatever scraps of this “money” are made available to us by way of the “too big to fail”, fiat-fueled systems and institutions lording over us. (For more on the basics of this system, please read Fiat $lavery: We have been bought and paid for…with nothing.)

This is all noteworthy as we are now lurching toward the next in a long series of economic catastrophes made possible through our fiat economic system, and it is particularly of note in light of acknowledgements to that effect being made by some of the elites at or near the top of the economic tower of Babel now teetering on the brink.

As ZeroHedge reported today in Deutsche Asks A Stunning Question: “Is This The Beginning Of The End Of Fiat Money?”:

One month ago, Deutsche Bank’s unorthodox credit analyst, Jim Reid published a phenomenal report, one which just a few years ago would have been anathema in the hushed corridors of high finance as it dealt with two formerly taboo topics: is a financial crisis coming (yes), and what are the catalysts that have led the world to its current pre-catastrophic state, to which Reid had three answers: central banks, financial bubbles and record amounts of debt.

. . . Just as striking was Reid’s nuanced observation that it was the fiat monetary system itself that has encouraged and perpetuated the current boom-bust cycle, and was itself in jeopardy of becoming extinct when the next megacrash hits:

“We think the final break with precious metal currency systems from the early 1970s (after centuries of adhering to such regimes) and to a fiat currency world has encouraged budget deficits, rising debts, huge credit creation, ultra loose monetary policy, global build-up of imbalances, financial deregulation and more unstable markets.

The various breaks with gold based currencies over the last century or so has correlated well with our financial shocks/crises indicator. It shows that you are more likely to see crises/shocks when we break from hard currency systems. Some of the devaluation to Gold has been mindboggling over the last 100 years.”

The implications of this allegation were tremendous, especially coming from a reputable professional who works in a company which only exists thanks to the current fiat regime: after all, much has been said about Deutsche Bank’s tens of trillions  in gross liabilities, mostly in the form of various rate derivatives, backed by hundreds of billions in deposits and, implicitly, the backstop of the German government as Deutsche Bank discovered the hard way one year ago.

However, what shocked most readers was that at its core, Reid’s report was dead accurate, and as Reid writes in a follow up report published this morning, it is the topic of the fiat system itself as potentially the weakest link in any future crisis that generated the most debate.

In the report titled, “The Start of the End of Fiat Money?” Reid writes that “as we road-showed the document a theme that had minor billing in the report started to gain more and more prominence in the discussions and as such we wanted to expand upon it in this short follow-up thematic note. The basic premise is that a fiat currency system – the likes of which we’ve had since 1971 – is inherently unstable and prone to high inflation all other things being equal. However, for the current system to have survived this long perhaps we’ve needed a huge offsetting disinflationary shock. We think that since around 1980 we’ve had such a force and there is evidence that this influence is now slowly reversing.”

And here comes the shocking punchline: not only does Reid concede that the fiat system “may be seriously tested over the coming decade and ultimately we may need to find an alternative” but that one such alternative is none other than cryptocurrencues, i.e. bitcoin, ethereum and so on. Which, while it may be a surprise to institutional investors appears to have been all too obvious to buyers of cryptocurrencies.

If we’re correct, the fiat currency system may be seriously tested over the coming decade and ultimately we may need to find an alternative. This is not necessarily a story for the next few months or quarters but we think the trend reversal is already slowly in place. . .

Someone in the Emperor’s Guard recognizes that the Emperor has no clothes.

Any way ya slice it, this is a Big Deal.

But let’s be honest, if we’ve thought about the foundations of our economic system for even the teeniest, tiniest little bit, we already know that the globe-dominating, fake-empire fueling fiction that is the US Dollar is the ultimate Naked Emperor…which is why we don’t tend to think about this stuff at all and why the State-licensed “professionals” in our State-run “education” systems don’t teach us anything about said nakedness of said Emperor.

However much the powers that be may wish for us to believe otherwise, pretending that all is well and that our system will somehow, some way magically find a way to go on forever won’t save us.

It’ll only make the coming crash that much harder.

Even the Emperor’s own people are beginning to admit long avoided truths out loud. Yet, even as they do, most of us go on pretending and enabling a system literally designed to enslave us, our children, and all future generations to come.

That makes Harvey Weinstein and his enablers look kinda weak by comparison, doesn’t it?