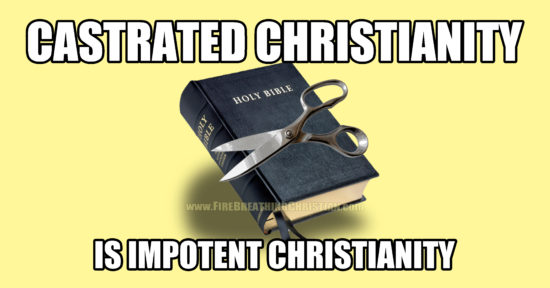 Sure, we all know that Snowflake Culture has overtaken and redefined America, but how did it happen?

How did feelings come to trump facts?

How did niceness (incoherently defined and selectively applied, of course) come to displace the spirit of loving confrontation and correction necessary to the pursuit of truth, the preservation of liberty, and the formation of real adult relationships, culture, and civilization?

How did things like masculinity and patriarchy come to be viewed as “toxic” to the point that they were actively purged from the culture?

To answer these important questions, we’re well served to consider a few others, like:

Who’s been telling us that real men ought to speak exclusively in hushed, non-threatening, Mr. Rogers-esque tones?

Who’s been preaching passivity and preemptive surrender of the culture in the name of a teeny-tiny counterfeit gospel that views “saving souls” as the beginning and end of the Christian mission here on earth?

Who’s been encouraging spiritualized navel-gazing by talking much about things like the “personal pursuit of holiness” and the “beauty of Christ”…while rarely, if ever, describing what that means in life in practice in detail where the rubber meets the road?

Who’s been running away from more and more of the vast swaths of Scripture that deal with hard subjects in very hard – and often quite crude – language?

Who’s been working tirelessly to separate the lordship of Christ from His creations of law, government, politics, and education…as well as art, humor, satire, and polemics?

Who’s been teaching people to be “nicer than Jesus” for generations now?

Professing Christians in America, that’s who.

So the next time you’re staring aghast at the latest example of weak, soft, effeminate “male” leadership and wondering how on God’s green earth we got to this point in American culture, please do take time to note that, no matter how initially painful the revelation may be, the radical feminization of American culture could never have happened without the radical feminization of Christianity coming first to pave the way.

Strong, clear, confident and, at times, boldly (and even crudely) confrontational male leadership, when pursued in a biblically sound manner, is something we are far more likely to revile than cherish these days in America.

Even in most American churches.

Even in most “conservative” and/or Reformed churches.

Seeking, encouraging, and modeling the patriarchal, masculine examples found throughout Scripture has become quite a contrary thing these days in America. So it should come as no surprise that we are now a land dominated by everything from loud, proud, authority-despising rebels to evangelically soft-spoken “nice guys” who would rather die than address people and issues in the manner that Scripture and God’s people in Scripture actually address people and issues in many instances.

We’ve bought into some very toxic notions of masculinity all right, but our test for toxicity isn’t to be determined by the light of the world or even by our favorite parts from its history (Reformers, Puritans, Founding Fathers, etc.). Our test for male toxicity (or any other kind of toxicity) is to be formed by consulting and submitting to the whole counsel of the Word of God.

When we apply that test, we see that sometimes incredibly hard (and even crude), confrontational language (and action) is necessary, good, and, most importantly, glorifying to God.

It’s also very important to note that the more we apply a biblical standard as our test for all things, the more quickly and clearly we will properly identify and address perversions of masculinity and abuses of authority.

Which brings us neatly back to America… 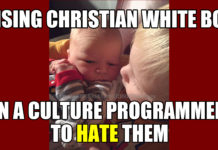