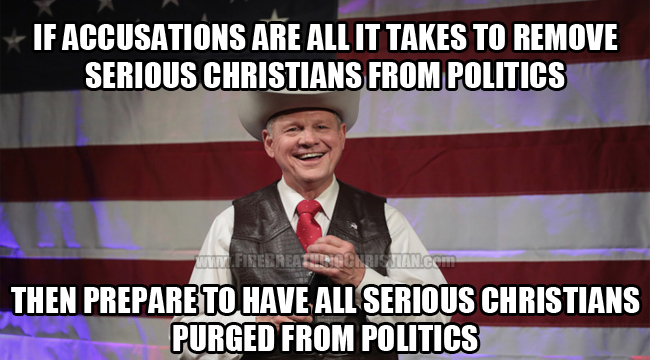 We live in an emotion-driven age.

Virtue signaling snowflakes abound, posing and posturing relentlessly in order to take advantage of the latest moral fad of the moment in time to claim credit and secure their status as properly enlightened citizens.

In this pursuit, they’re happy (and often quite eager) to ditch anything resembling a biblical standard for measuring or defining things like law, love, beauty, right, wrong, or anything else…including guilt and character.

And who is championing this abandonment of biblical standards of measurement in the vital areas of character and guilt assessment?

Why, American Christians, of course.

This is one of the more heartbreaking truths that God is revealing through the Roy Moore situation unfolding in Alabama.

For many professing Christians in the land, the “Accusation = Guilt” card has actually become “a thing”, as in: a tool to be used to bludgeon and besmirch others into submission.

Submission to what, exactly?

The emotion-driven, Bible-ditching (and thereby thought-devaluing) spirit of the age, that’s what.

Even the most bizarrely non-credible claims made by the most thoroughly discredited of accusers is now heralded as enough to warrant a man of Roy Moore’s character being forced out of the race for a vacated seat in the Senate…at least if the virtue signaling, emotion-driven posers of the day have anything to say about it.

Thankfully, there seem to be more than enough sane, coherent, thinking voters in Alabama to counteract the touchy-feely/crazy-angry hordes who think weak and very suspicious accusations ought to be enough to prevent Moore from even sticking around for the vote. We won’t know for certain ’til tomorrow’s election results, of course, but indications are that Moore will have a good day over the hoots and howls of “Accusation = Guilt” advocates across the political spectrum.

Whatever happens tomorrow, we are well served to take advantage of the great learning opportunity that God is providing through this situation.

One item under that umbrella that I’d like to touch on briefly here is the fact that, if the “Accusation = Guilt” card is validated by professing Christians and used by them to eliminate or harm a man of such character as Roy Moore, then those same Christians need not be surprised when other serious Christians simply avoid participation in the political process altogether.

Why would any solid, wise, serious Christian man or woman with anything in their past that might be warped into an accusation that meets the moralistic posturing standards of the day (which are always shifting, of course) – why would that person bother to invest anything approaching the time, energy, and personal risk necessary to viably enter the political realm?

Why would they make such a self-sacrificial investment if, at any moment, all the opposition has to do is radically transform some event or perspective from their past – even 30 or 40 years past – and then contort/embellish upon it sufficiently to produce outrage in virtue signaling, emotion-driven snowflakes of the day to the point that calls for a Death by Accusation approach are embraced even by professing Christians in the land?

And let’s remember: This formula doesn’t even require a teeny-tiny nugget of truth upon which to build, embellish, and transform a non-issue into the giant, impassible Accusation over which no candidate will be allowed to pass. All that’s needed is the Accusation.

So, to all the virtue signaling, emotion-driven, precious snowflakes out there who’ve decided to buy into and promote the Death by Accusation approach to Roy Moore’s candidacy, you ought to be ashamed.

You ought to repent.

If you keep playing these sorts of games with concepts of guilt and character – if you keep ditching biblical standards of measurement for either or both of these critical concepts – then you will play a pivotal role in giving enemies of Christianity a cheap and easy tool by which they will be happy to purge every serious Christian man and woman from the political realm in America.