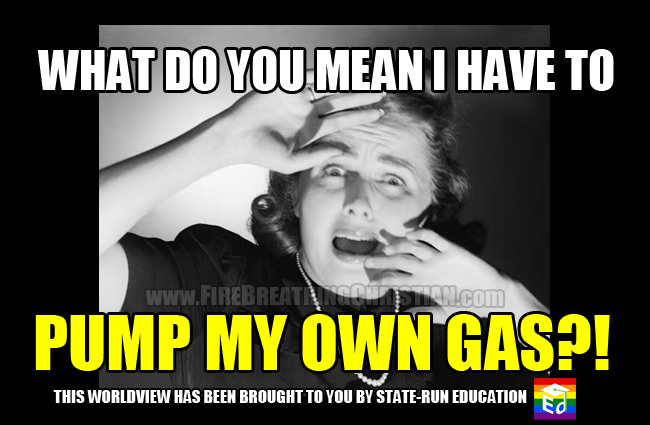 It should come as no surprise that professional politicians – men and women who sit atop ginormous bureaucratic systems loaded with State-approved “professionals” of all sorts – would be inclined to make us all dependent on said professionals. Republican, Democrat, Left and Right wing leaders who are “in the system” all tend to agree: We the People need massive amounts of “professional” regulation, supervision, prevention, and maintenance if we’re going to avoid killing ourselves and most (if not all) of those around us in the next five minutes or so through one act of suicidal stupidity or another.

Put another way: We are children – children of the American State.

We need to be taken care of.

As such, we are purposefully maintained children, intentionally retarded in our growth and systematically prevented (or protected) from attaining anything close to true maturity, responsibility, or pretty much anything else associated with genuine adulthood.

We’re so ignorant, incompetent, and in desperate need of the most basic of supervision that we cannot even educate our own little children. We need “professionals” for that – State-trained, State-licensed professionals who will promote a State-vetted, State-centered, State-serving worldview as they go about molding the minds of the young.

After generations of this State-promoted (and State-enforced, when possible) approach to adulthood avoidance, we have become a pathetic culture comprised of weak, hobbled little emotion-driven snowflakes who, after spending our lives immersed in State-run “education” and Corporate-managed pop-culture, are both: 1) Often unwilling and usually incapable of performing the most basic of true adult tasks, like taking a risk and assuming personal responsibility for the consequences (and learning valuable lessons in the process), and 2) Incredibly proud of who we are, having had high self-esteem prioritized in the systems that have (again, purposefully) neglected to teach us a worldview that values, rather than runs from, the pursuit of true adulthood.

After all, if we were ever to become actual adults who actually did the things that God made actual adults to do, then we wouldn’t need most (nearly all) of the “professionals” trained, licensed, and deployed by the State.

We wouldn’t need (or even want) State-licensed, Statism-promoting “professional” teachers shaping the minds of our five-, six-, and seven-year-olds.

We wouldn’t want State-programmed bureaucrats determining who is fit (and then forced to purchase a State license) to open and operate a lemonade stand in America.

We wouldn’t want State-written rules as to if, when, and how we pump gas into our cars.

Which brings us to Oregon.

In an article entitled ‘I don’t even know HOW’: Some Oregonians panic about new self-service gas law, The Washington Post chronicled this latest chapter in the death-spiral dumpster-fire that is our utterly State-dependent American culture:

A new law that took effect this week in Oregon will allow residents in rural counties to pump their own gas — a divergence from the state’s decades-long history of having attendants pump gas for drivers.

Under House Bill 2482, which took effect Monday, retailers in counties with a population of less than 40,000 are allowed to have self-service gas pumps. Drivers in 15 counties can now pump their own gas any time of day, while those in three other rural counties can do so after business hours, between 6 p.m. and 6 a.m.

The Internet machine roared, fueled by a local TV station’s now-viral Facebook post asking people to react to the new law. Some commenters were angry and perturbed by the possibility of having to pump their own gas in the cold, while those from other states scoffed.

“No! Disabled, seniors, people with young children in the car need help. Not to mention getting out of your car with transients around and not feeling safe. This is a very bad idea. Grrr,” another woman wrote.

“I’ve lived in this state all my life and I REFUSE to pump my own gas . . . This [is] a service only qualified people should perform. I will literally park at the pump and wait until someone pumps my gas.”

While it may be tempting to laugh (or cry or laugh until you cry) at the thought that pumping gas into a car is something that “only qualified people should perform”, we really need to zone in on that comically tragic quote and realize that it epitomizes American life and culture in 2018.

We have become a people who look to the State and its State-chosen “professionals” for nearly everything.

And it all begins with education – the pursuit of knowledge.

Once we caved on that and agreed to hand our little ones over to the State for State-crafted “education”, it was only a matter of time before we’d come to the point where we want (and may, in many cases, actually need) a “professional” to pump gas for us because we’re “unqualified” to do such a thing ourself.

State-dependence is the name of the American political game, my friends.

This is why you won’t be hearing from any major national Democrats, Republicans, Leftists, or so-called conservatives about how it is essential for us to phase out and repent of overtly Socialist/State-dependence promoting/individual-maturity-inhibiting programs like Social Security and public schools.

This is why American “conservatives” and liberals tend to agree on all manner of State-managed “help” for people.

They just can’t imagine (and shudder if they try) a world in which they actually have to do what God made adults to do.

They just can’t imagine a world where they aren’t protected from the horrors of having to plan their own retirement or educate their own children without any State involvement.

So let’s be careful not to laugh too much at these sad, dependent Oregonian children (of all ages) unless we’re first willing to take an honest look at the many ways in which we are like them.

May God grace us with the desire to see, repent of, and tear down our State-promoted idols and the State-forged chains that keep us from reaching our full adult potential.

The State is not “helping” us.

It is helping itself by making and keeping us as its purposefully retarded, dependent little children.