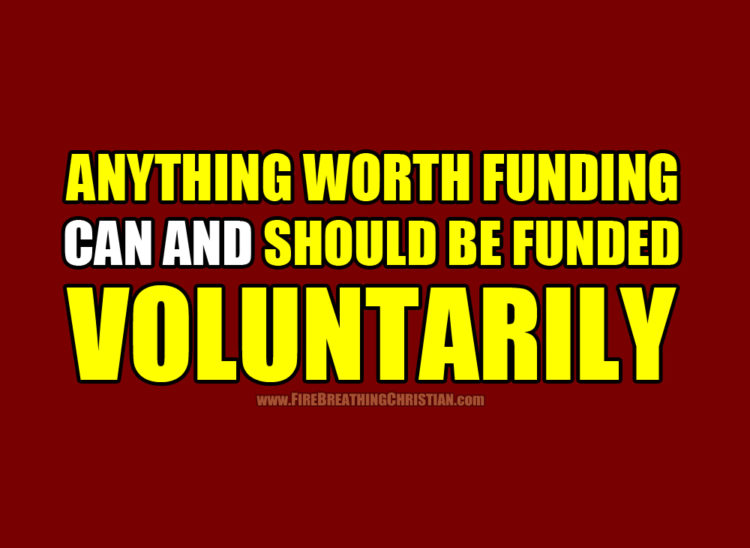 Wanna see just how far from freedom-loving even the typical “conservative” in America has become?

That’s what passes for “conservatism” in America these days. Even among self-identified Christians.

So what if this approach to funding public schools effectively makes us all serfs and renters from the state? So what if it means that we literally can’t own a home outright in America since our “rent” (property taxes) to the government can never end in order to keep this flagrantly Marxist nightmare scenario rolling along perpetually in “the land of the free” and the home of the NSA? (For more on this, please read How “free public schools” make us all renters from the State.)

The bottom line response to these concerns from most American “conservative Christians” these days seems to be: “Well, we just have to do it this way,” accompanied by some version of, “If we don’t do it this way, then it won’t happen!”, which translates basically into: “If we don’t use the coercive power of the State to confiscate wealth from people and redistribute it in the form of public school buildings, teachers, bureaucrats and the like, how will we ever have our precious public schools, teachers, and bureaucrats?!”

The standard Marxist party line now routinely regurgitated by State-programmed “conservative Christians” is, in a nutshell: The ends justify the means, with the ends, in this case, being State-run…well…everything.

The assumed propriety of State-run theft on a massive scale in order to fund State-empowering programs is now a given in America…even in most American churches.

The same general principle (or vice) of “justified theft” is applied by garden variety American Christian conservatives to all manner of State-run programs. From scores of overtly satanic/Marxist scams like the youth-raping Ponzi scheme of Social Security to the seemingly infinite layers of bureaucracy aimed at controlling professions, controlling businesses, and securing the dominance of our black magic fiat currency economic system, conservative Christian Americans have, for the most part, become full-blown converts (and quite evangelical ones at that) when it comes to embracing and defending the “need” for  the State to confiscate the property of individuals in order to fund the increasingly Orwellian beast of American Socialism.

Which brings us back to public schools, since that’s where most, if not all, of these “conservative Christians” have been trained (discipled) by the State.

Yet somehow, some way, here in ‘Merica we’ve gotten it in our heads that these basic, fundamental rules regarding respect for private property and the evil of theft don’t actually apply to people when those people join together as a gang that they then name “The State” (or “the government”).

The State, you see, is immune to the Law of God.

Or maybe The State is just above the Law of God.

Either way, you get the point.

To get more of a feel for just how comfortable we’ve become with covetousness and theft, consider the opening lines of a post that we made on the subject a while back:

“Is it okay to covet your neighbor’s property?

Yep, we actually think we’re all about freedom, liberty, free markets, property rights and capitalism while we openly and quite routinely use the power of the State to steal from our neighbors on our behalf.“

Spend your money funding what you want funded.

Spend your time and energy helping promote the funding of the things that you want funded.

If your pet program or system requires the confiscation of other’s property at gunpoint through the coercive power of the State, then you have a serious problem.

If your pet program or system cannot find voluntarily offered support sufficient to keep it rolling along, then it shouldn’t keep rolling along. That’s how freedom works.

Anything worth funding can and should be funded voluntarily.

How does that impact your view of culture and civil government?

We’ll dive more into that soon, Lord willing. In the meantime, let’s close (or at least pause) with the perfect (and utterly relevant) Word of God on true freedom: