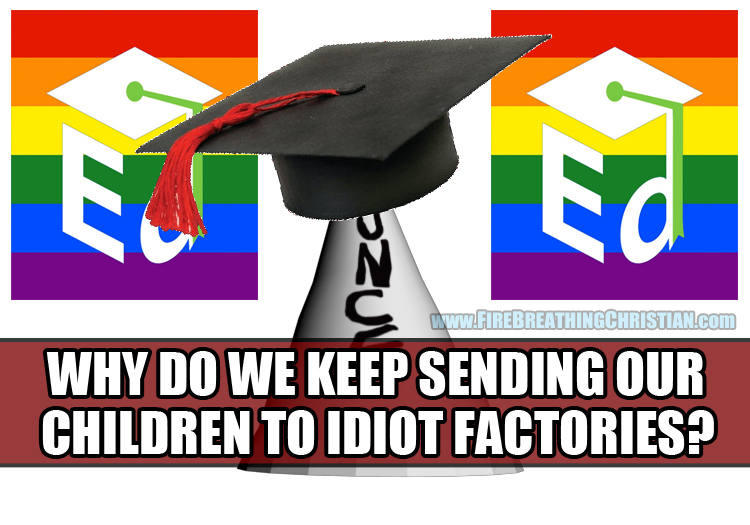 What if the vast majority of an entire wave of public school product couldn’t even read or understand mathematics proficiently?

What if two thirds (that’s two outta three students for those of you who struggle with fractions) of public school product was that intellectually hobbled and incompetent after years and years of State-run “education”?

Would that wake people up?

Would that get parents to be, um, actual parents and rescue their children from the State-run “education” system?

Would that get pastors (supposedly also known as “shepherds”) to do their job and start preaching the Word of God in detail on the subject of children’s education?

You could have a 90% intellectual incompetence rate in an entire wave of American public school product and parents would mostly shrug, express some token “outrage”, and keep right on sending their children to the beast for education in things like gay rights and transgenderism, but not so much in math, history, logic and economics…all with pastoral approval, of course.

Because these parents and pastors have been discipled by the State to do so, that’s why.

Thus the march into increasing cultural darkness goes on, with one generation feeding the next into the fire while imagining that somehow, some way, it’ll all work out just fine in the end.

The only thing more idiotic than public school product these days seems to be the endless, mindless spin and avoidance of reality that props the whole system up.

Lest you think I’m being too snarky or hard by using a term like “idiotic” to describe public school product in America these days, what term would you prefer in reference to a group of people who, on average, after many years of “education” and training by the State, cannot even read or comprehend mathematics proficiently? Would “ignorant” or “incompetent” be nicer? How about “stupid”? Would that fit?

The exact term isn’t really the point, though our hypersensitivity and propensity to protect Snowflakes from harsh (yet often accurate) labels nearly as vigorously as pastors “protect” their flocks from the Word of God on children’s education is a noteworthy component of the Big Picture here. The bottom line is that, any way you wanna slice (or label) it, ours is a State-run “education” system that is very good at regularly producing intellectually incompetent people in massive numbers.

Intellectual incompetence is the standard result of this “education” system’s efforts.

Because if there’s one system and group of employees who have demonstrated value and usefulness as they’ve gone about the process of producing a two-thirds incompetence rate in math and reading, it’s our beloved public schools and public school teachers.

Oh, and let’s never forget that we pay for this magnificent system using property stolen from our neighbors via property tax, which effectively means that none of us can actually own a home and we’re all renters from the State here in “the land of the free” and the home of the NSA. Woohoo!

(For more on this important aspect of our American State-run “education” system, please read How “free public schools” make us all renters from the State.)

So how did our theft-funded, Communist Manifesto advocated public school system get to this low (or is that high?) point? How did it come to the place where it produces a full 2/3 block of intellectual incompetents?

For details on this latest American benchmark for systematic incompetence production, check out the following from a report recently published at CNS News:

The results are far worse for students enrolled in some urban districts.

The report goes on to chronicle what has to be one of the greatest success stories in American history, so long as we understand that cranking out increasingly State-dependent, State-submissive, personally incompetent and irresponsible masses has been the mission of public schools in America for generations now.

It takes a special kind of idiot not to see the problem here.

It takes a special kind of idiot not to see where this is going.

It takes a special kind of idiot to keep jumping into this wood-chipper.

Not so coincidentally, that’s just the kind of idiot that America’s “education” system specializes in producing.

May God grace us with repentance of our idolatry so that we might be restored from our idiocy.