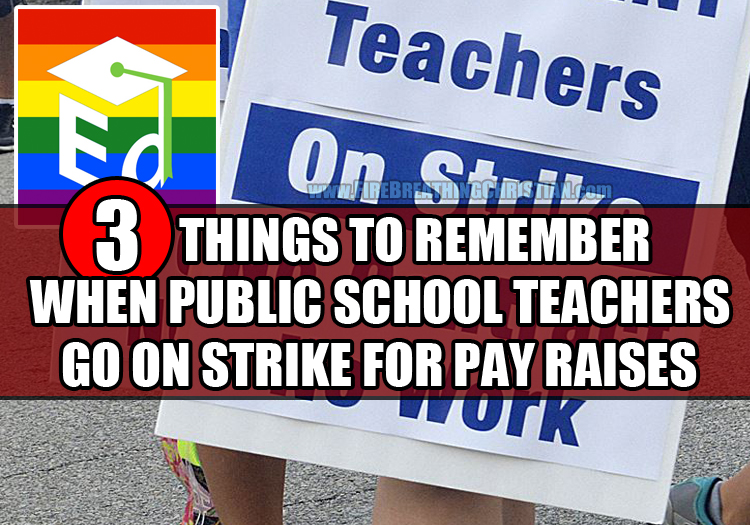 Wave after wave of super-confident and proud, yet stunningly ignorant and incompetent public school product is washing over the culture, and no matter how many artificial A’s and participation trophies are handed out, there’s just no hiding the fact that American public schools are idiot factories (or, if you prefer, State-managed assembly lines for corporation-compliant cogs).

So what’s a public school teacher to do?

What’s a State-certified “professional” sculptor of children’s minds to do as the wheels come off and the farce of their system is exposed?

Why, demand a pay raise, of course!

And tons more money for public schools in general!

As stark raving crazy as that may sound, it’s exactly the approach being taken even now all across America as the pervasive awfulness of American public schools becomes more and more clear to more and more people.

As if yesterday’s report chronicling the abysmal performance of American public school students wasn’t enough on its own to nudge people out of the State-controlled darkness and into the privately and voluntarily fueled light where the subject of children’s education is concerned, we are being graced by God with additional truckloads of redundant clarity as public school teachers in various states are actually on strike or threatening to go on strike at this very moment, demanding pay increases and more funding for the very public schools that are cranking out increasingly ignorant, arrogant, entitled, State-dependent and aggressively anti-Christian drones by the boatload.

We touched on this yesterday when we noted the “solution” that always seems to be offered by America’s “professional educators” are concerned, no matter how poor a job they are doing of actually educating children:

“Intellectual incompetence is the standard result of this “education” system’s efforts.

Because if there’s one system and group of employees who have demonstrated value and usefulness as they’ve gone about the process of producing a two-thirds incompetence rate in math and reading, it’s our beloved public schools and public school teachers. . . “

Today AP is reporting that Arizona teachers are on the verge of getting much of what they’ve recently gone on strike to demand:

“Arizona teachers said they will end a historic statewide strike Thursday that shut down schools for days if lawmakers pass a plan that offers big raises and increased school funding but that still falls short of their demands.

Organizers made the announcement Tuesday after educators statewide walked off the job last week and closed schools to demand higher pay and more education spending. The Arizona action followed a teacher uprising that started in other parts of the U.S. and was punctuated by a march of tens of thousands of red-clad supporters.

Those mobilizing teachers criticized a Republican-led funding plan but said it was time to go back to work.

“Our fight is not over, we have options,” said Rebecca Garelli, a teacher and strike organizer. “But it is time for us to get back to our students and get back into our classrooms.” . . . “

To make a relevant connection between the two stories from yesterday and today, it only seems fitting to note how Arizona public schools are performing according to the proficiency (or lack of proficiency) reports cited in reference to a roughly 2/3 nationwide incompetence rate where reading and math comprehension are concerned.

In reading, Arizona eighth graders ranked 38th (of the 50 United States), with 30% of them rated as proficient according to the 2017 NAEP test. That means 70% were not proficient, as in: seven out of ten.

To help incorporate relevant concepts that public schools religiously avoid teaching us to notice, much less contemplate, where things like education, economics, truth, and freedom are concerned, I’d like to offer the following three things to remember the next time a gang of teachers goes on strike demanding pay raises and more money for public schools:

1. The increasingly awful performance of public school product should be directly linked to the performance (and therefore the value) of public school teachers.
.
Somehow, public school teachers have managed to paint themselves as having very little to do with the mountains of bad fruit oozing out the back end of the public school assembly line. They blame parents, culture, politicians, television, the Internet, and everything/everyone but themselves for the incredibly bad performance of their students.
.
This is nonsensical. (And quite a bad approach to responsibility to be modeling for watching students, don’t you think?)
.
If this assessment is true and their impact on performance is so slight (perhaps even nonexistent), then why are they employed as “teachers” at all? If this assessment is not true (as it obviously isn’t), then why should their positions as teachers not be significantly linked to the product they’re “professionally” producing?

2. Public school teachers, teacher unions, and public school activists in general tend to despise the thought of having to compete for education-related jobs in a truly free market. Public school hostility toward anything that opens up or presents even the slightest little sliver of competition against the State-controlled children’s education system tells us all we need to know about the nature of most who are fighting tooth and nail on behalf of the public school system. They are thieves, plain and simple; hell-bent on taxing (stealing) more and more and more from you and me in order to fund the State-managed idiot factories that pay their salaries.
.
While many public school teachers are good, brilliant, and quite competent people who would have no trouble thriving in a free market where they would earn a healthy living, vast numbers of public school teachers hate the thought of free market scenarios precisely because they know that their incompetence would not be rewarded as it is now through the coercive power of the State.

3. Public schools, in accordance with their nature as the tenth plank of The Communist Manifesto, are funded through the State-managed confiscation and redistribution of wealth. In most cases, this includes property tax which, also in accordance with the Marxist ideals of The Communist Manifesto, prevents anyone in America from having the ability to actually own a home outright. In this, public schools are funded in a manner that makes us all renters from the State. (For more on this, please read: How “free public schools” make us all renters from the State.)
.
It should come as no surprise whatsoever that a system advocated in Marxism and funded by the Marxist-preferred means of State-managed redistribution of wealth would also be a system loaded with Marxist teachers who produce, by design, increasingly Marxist product.

These are at least a few of the things that we should consider each and every time public school teachers demand increased funding for the idiot factories that employ them.