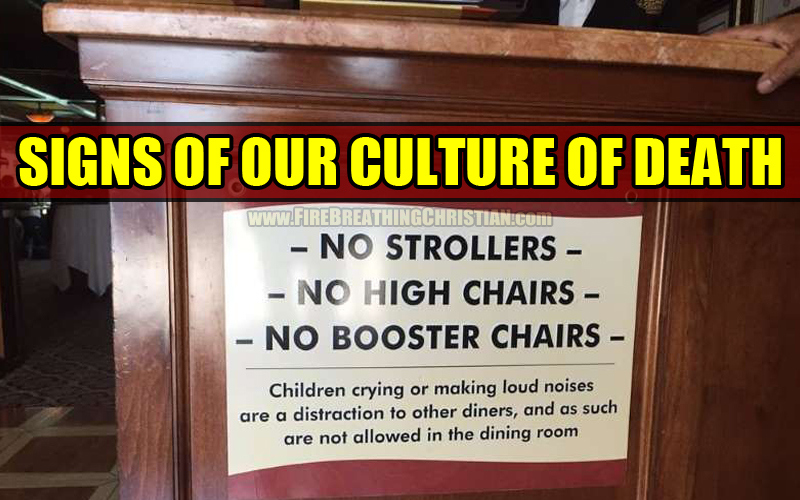 One of the telltale signs of a culture of death is its devaluing of children.

Here in 2018 America we’re well down that road, happily shifting into higher gears as we rocket along with over 60,000,000 of our own babies’ bodies in the rearview mirror, having been murdered for convenience in the name of American-style “freedom” and “liberty”. The children that we do allow to live are then sold into debt bondage to prop up our All-American Welfare/Warfare State, with most of them shipped off to the same State for an “education” built on the serpent’s pitch in Genesis 3 so that the whole nightmare can be perpetuated generation after generation.

So yeah, we’re in a pretty bad place.

But hey, the food and entertainment is awesome!

We may not have a future – or care to do the things required to secure one – but we sure are gonna have a great time now.

That’s the bottom line conveyed in a recent article posted by Business Insider, where America’s plunge ever deeper into a chic, hip approach to death culture was chronicled as follows:

“It seems like every restaurant has a gimmick these days, whether it’s an Instagram-ready all-Avocado theme or a kitschy aesthetic. But one spot in Monterey, California, has a different idea.

Children who are “crying or making loud noises” are not allowed inside Old Fisherman’s Grotto. The restaurant is serious about this policy — and people aren’t sure what to make of it.

Chris Shake, the restaurant’s owner, told INSIDER about the inspiration behind the rule. “We decided that it was important that our guests enjoy a great meal and not be distracted by children crying in our dining room,” he said.

The restaurant hasn’t allowed strollers or high chairs in its dining room since 2009. . . “

To be clear, providing or occasionally desiring an “adults only” vibe or setting is not inherently evil.

It can be totally legit.

Moreover, free people are (or should be), by definition, free to do what they want with their privately owned businesses, and other free people should be allowed to reward or punish said business decisions by way of various freely chosen activities, like, for example, eating at a particular restaurant.

With those important points established, there’s value in noting the “no strollers, no high chairs, no booster chairs” policy in question as indicative of a culture that has already fallen far and seems hell-bent on continuing its plunge into the darkness where the devaluation of children is concerned.

For a good long while now, one of the core tenants of American culture has been that children are, primarily and at best, a burden to be endured. As such, children are to be kept to a minimum so not to interfere with our pursuit and enjoyment of the things that actually matter most to us.

This is a glaring, baseline reality in American culture these days, whether we want to admit it or not.

What we do want – and are encouraged to want – is all manner of self-centered, self-pleasing, and self-serving things over and above children.

If we’re going to have children at all, we’re “allowed” 1-3 before people start – and are encouraged to start – looking at us funny. If we have 4 or 5, we’re clearly off the reservation and in need of correction. If we have 6 or more…well…we’re obviously crazy.

We just don’t understand that the path to true happiness – the American Dream – puts children “in their place” at or near the bottom of priorities in life.

We just don’t understand that things like careers, nice houses, pricey toys, and quality vacations should easily eclipse any desire that anyone could possibly have to bring a third or fourth baby into the world. (See also: 10 Real Meanings Of “We Can’t Afford To Homeschool!”)

So the divide between the American culture of death and the biblical culture of life grows and grows. Generation after generation, God’s faithful remnant faithfully pursues His loving commands where family and children are concerned. Generation after generation, the American culture of death pushes family and children further down the list of priorities in the lives of its people so that they can enjoy, among other things, a meal devoid of the distractions caused by any sign of new life around them.