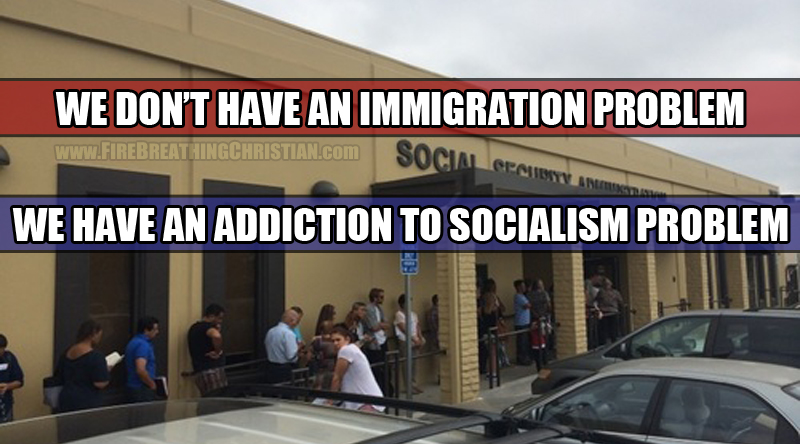 What does the average American want more: The Welfare State or a real, working, easily implemented solution to the ongoing illegal immigration crisis?

For roughly 99.9% of Americans, the answer is clear: The Welfare State.

And that probably includes over 90% of professing conservative Christians here in “the land of the free” and home of the NSA.

America’s Socialist Welfare State is the magnet that draws millions and millions of illegal immigrants into the United States.

We all know it.

So why not just ditch the Welfare State then?

‘Cause we’re addicted, that’s why.

Here in ‘Merica, we’re all about protecting our Social Security, Public Schools, Medicare, Medicaid, disability payments, unemployment benefits, food stamps, and rent assistance from those greedy, lazy illegal immigrants who keep pouring over the border and onto the rolls of the gajillion State-run programs upon which most of most “legal” (as in “legally stealing from others through the coercive power of the State”) residents of these United States have become dependent.

Basically, we’ve become a bunch of State-dependents who don’t want to sink our beloved destined-to-sink-eventually Welfare State any more quickly than necessary.

We want to pretend that Social Security, Food Stamps, and all the rest are somehow legit for we the “legal” dependents of American Socialism.

We want to pretend that the rank Ponzi Scheme of Socialist Security and the many American Socialist programs like it will somehow work out for the new born and future generations of Americans who are, thanks to these programs, destined to inherit what is a financial death sentence.

America has a Socialism problem.

Until we repent of our addiction to the State, We the People are (and deserve to be) led ever deeper down the dark path that we’re on now (and have been on for a very long time).

May God grace us with the conviction, repentance, and reformation needed to kick the American Socialism habit and find true life apart from the “helping” hand of the State.