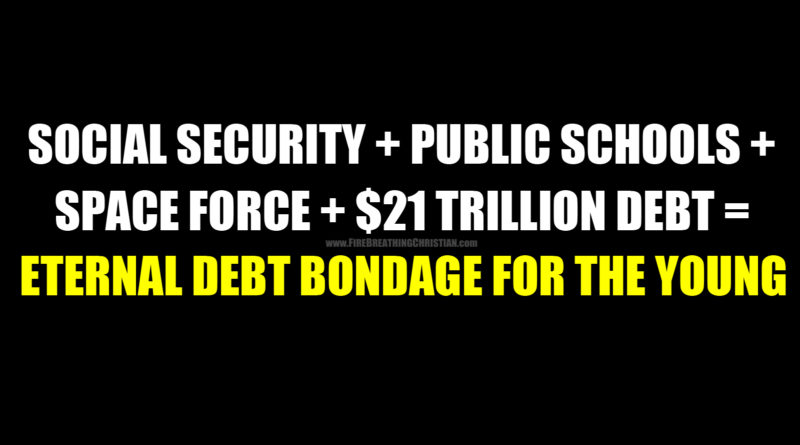 Even more debt bondage for the young, as if there wasn’t enough already.

Think about what we are doing to young people and future generations of Americans with the insanity of American Big Government Socialism.

Imagine a child being born today into a God-fearing, Bible-believing family living in the United States. While that child might have much to be thankful for in the relative freedom that still lingers here in the “land of the free” and the home of the NSA, there can be no doubt that, particularly on the economic front, they will face profound opposition and abuse from two large groups living within the same general population:

1. Young people who have been trained by the State to be Socialists through public schools, and…

The latter group is so thoroughly corrupted and clueless that it has spent its collective lifetime promoting (and it still promotes) the overtly Marxist tool of public schools, which has, by design, churned out generation after generation of increasingly anti-Christian, pro-State drones.

This is the vice that today’s young biblically minded Americans have been born into.

These are the two massive anti-Christian, State-worshipping groups that are attacking the young on multiple fronts.

One group focuses on the “value and importance” of things like Socialist Security and (again) Public Schools, while the other champions Socialized medicine and universal basic income for all.

Both groups openly rape and pillage the economic future of the young.

Both groups happily consign future generations to eternal debt bondage in order to prop up and expand their beloved State, hoping that nobody will notice that the many programs and plans they claim to advance in the name of love are actually acts of cruel hatred for those whose assets they covet and steal with a smile.

“That’s just how things work in ‘Merica,” they say…as they covet, steal, and advocate others do the same…

So what’s a Bible-believing, God-fearing young person (or old person for that matter) to do in such a setting?

Guide every passion, project, and political thought by the whole counsel of God each and every day.

And wait for the All-American Economic Jenga Tower of Babel to fall, as it inevitably will.

Prepare to build on that rubble, Christian.

The opportunity to do so is coming sooner than most can imagine.