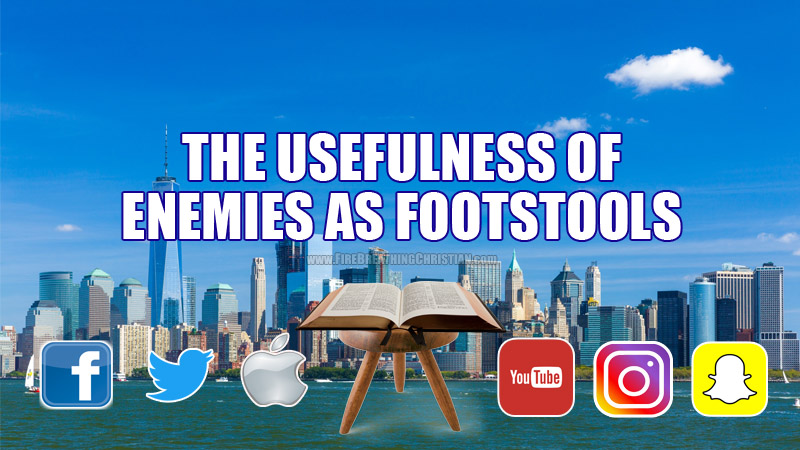 One oft-neglected aspect of God promising to make Christ’s enemies into His footstool is the utility of a footstool. To be a bit more precise: Footstools are quite handy tools in a variety of ways.

For one thing, they often serve as a way for us to boost ourselves up to get to something that might have been just out of reach without a footstool. For another, they sometimes serve to make life more comfortable as we kick up our heels while sitting in a favorite chair.

While I’m not necessarily arguing here for a hard and fast affixing of these footstool-related reference points as being the primary concept expressed in any of the many passages that describe how the Father will make all of Jesus’ enemies into Christ’s footstool, I do think that considering the value of footstools in some detail can be of some benefit, especially as we are (temporarily) living in a chapter of human history that is largely shaped by a variety of technologies and systems that have been developed by enemies of Christ and His people.

In this context it seems important to take a moment to notice that many of the various economic, political, technological and artistic approaches and products being developed and crafted by enemies of God in order to subvert and/or control culture are not, in and of themselves, evil.

More often than not, they’re good.

The fact that a tool is often used in pursuit of evil does not make the tool itself evil. The tool is just that: a tool. A medium. A product. A means to an end, often times.

And many of the tools, mediums, and systems that the Lord is raising up now through the God-given ingenuity of unbelievers (via common grace) are tools that we should embrace, use, and build upon to advance the Kingdom of God in accordance with the Gospel-fueled Great Commission.

The Internet is a miraculous blessing, as was the printing press before it.

Film, comics, games, sports…all awesome expressions of God’s nature and creativity just waiting to be purified and (re)directed toward His glory for the increasingly beneficial use of His people.

These tools and others are just begging to be repurposed and restored in fidelity to Christ.

These things are being raised up by God right here and now so that His people might more deeply and expressively pursue paths to the beautiful, vibrant, exponentially adventurous lives and culture that only He makes possible.

So let’s get with the footstool-using program, shall we?

Let’s thank God for what He’s faithfully provided to us through His (and our) enemies.

Let’s use these footstools for all they’re worth…which is quite a lot, actually.