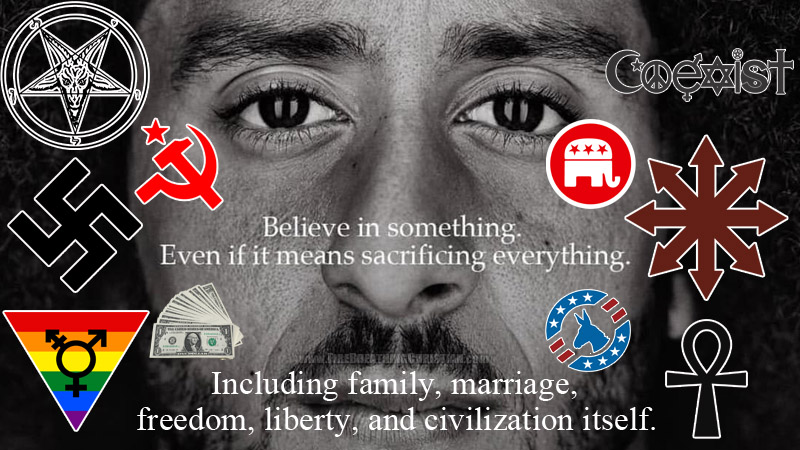 According to corporate America and the pop culture it’s crafted carefully for generations, we’re supposed to “believe in something”…”even if it means sacrificing everything.”

They really mean it, and in all the worst ways possible, as the past fifty years or so should have made painfully plain to anyone with two brain cells to rub together.

The big businesses behind Big Government (which is the biggest Big Business of all) have always been about undermining the biblical foundations of freedom, liberty, and life itself.

They’ve always been about encouraging individuals to craft idols and then sacrifice everything to those idols, with the idols in question often reshaped/repurposed versions of previously good things, like biblical concepts of liberty and freedom, for example.

By getting us away from Christ as the literal, personal and essential starting point for understanding and defining true freedom and healthy, life-enabling liberty, we’ve been made into easy marks for the counterfeit versions of freedom and liberty that define and dominate American culture these day.

The Big Business owned and operated American State is the big winner here, and it will keep right on winning for as long as we buy into the fundamentally anti-Christian (and therefore anti-freedom/anti-liberty) principles that it pushes.

This is why when a thing like the new Nike Kaepernick ad pops up, we need to move quickly past the predictable “outrage” and rote theatrics flowing from many on the right side of the political spectrum. We need to dodge the distractions of the Right/Left political puppet show that would have us focus on what we don’t like about Kaepernick, Nike, or their worldview(s), and we need to focus on how the foundation upon which Nike/Kaepernick is built is the same foundation propping up all manner of Right Wing, Republican, and “conservative” idols.

It’s not enough to note that the things that Kaepernick or Nike want us to “believe in” are actually quite bad for us.

It’s vital that we notice that most of the celebrities and organizations on “the other side of the political spectrum” are preaching and building from the same rotten foundation.

Aren’t we being encouraged to believe that the path to “Making America Great” or some such thing is not at all dependent upon explicit repentance and submission to Christ as King in practice, but is rather dependent on…pride? In America? You know: The America that celebrates the “‘god-given right’ to openly worship Allah or Satan, and the America that routinely murders, dismembers, and sells parts from 1,000,000+ babies each and every year in the name of “freedom”, “liberty”, and “rights”?

Oh yeah, pride will save us…no need to repent.

No need to cry out to the one true God in explicit detail.

No need for that.

Oh yeah, we definitely need to be on that train!

As publicly as possible!

He needs our support, don’t ya know.

Keep these things in mind the next time you hear or see a Trump worshipper or America worshipper act like they are way over on the other side of the spectrum compared to the likes of Nike and Kaepernick, ’cause they’re not.

They both often want to believe in certain things very publicly and very proudly, no matter the cost, and the list of things they want to fight clearly, publicly, and proudly for does not include explicit submission to Christ as King. It does not include repentance.

Which is another way of saying that the things these people spend themselves fighting for publicly offer no real path to true hope, true freedom, true liberty, true prosperity, or anything else that they claim to want through their political rhetoric and pop culture propaganda.

But it never seems to deliver does it?

These false idols and paths to “greatness” never seem to materialize. They never seem to last. 5 or 10 or 20 years after even the best of them comes and goes, we always seem to end up much less free, much more dependent, and much more confused than we were when they started.

This is no coincidence.

This is how things have always and will always work in God’s creation.

When pride trumps repentance in a culture, that culture dies.

Isn’t that how it ought to be in God’s creation?

Isn’t that how it has to be a universe that is literally created, defined, and sustained by the very Nature of God?

The more we cling to pride over repentance as the path by which America (or any other country) might be “made great again”, the more we will dive (and plunge future generations) deeper down the drain.

Our pride and refusal to repent and submit to Christ as the actual, essential starting point for every good thing in His creation is why we can no longer coherently define things like liberty, freedom, or conservative anymore.

It’s why we can’t even define boy or girl anymore.

For all the pride-fueled hellishness that God has allowed us to chase after in recent years, we’ve still not gotten the picture. We’re still clinging to the same old pride, lies, and ways of doing things that have brought us to our present pathetic condition.

We still want the same games.

We still want the same lies.

We still want to “believe in anything” but Christ as Lord in detail in every area of life, including the political and economic, “even if it means sacrificing everything”.