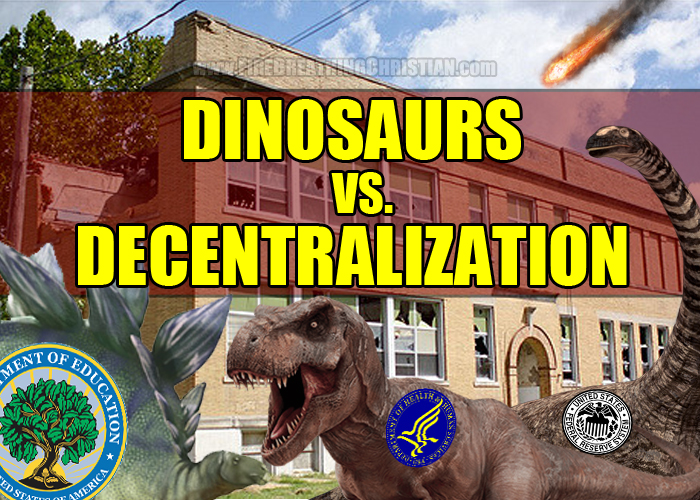 Things are getting better. Much better and in major ways.

For every idiot Socialist (of both Republican and Democrat flavors) pitching yet another version of the same old tired State-managed/centralized approach to education, economics medicine and everything else, there seems to be a dozen or so freedom-, liberty-, and individual-empowering alternatives taking root and springing up in the real world.

For every culture-wrecking Marxist (of both Republican and Democrat flavors) doing their dead-level (and unintentionally comical) best to smash the patriarchy and destroy the God-given institutions, structures and hierarchies necessary to civilization, there are waves of counter-revolutionaries waking up, shaking off the fog, and going about the business of building a healthy, thriving civilization one tiny little piece at a time.

For a large and rapidly growing number of awakened adults swimming in the sea of cultural insanity produced and promoted by public schools, network media, and a laughably rigged economic system built on magic money created out of thin air, long gone are the days of dependence on dinosaur media, dinosaur education, and dinosaur political systems.

For these people, adulthood is the goal.

All of which requires real risk and none of which is compatible with the dinosaur education/media/political program.

The dinosaurs are about control. Their control over us.

They’re about “taking care of us”.

They’re about “protecting us” from the dangers of freedom and liberty.

They’re about shielding us from the threat of…becoming actual adults.

Adults don’t need to be “taken care of” and controlled like dependent children.

Adults don’t need the state or its corporate sponsors telling them whether they can buy a beer on Sunday or how much water they can use to flush their toilets.

Adults – real adults – take care of themselves and their responsibilities…voluntarily.

And that’s the word – voluntarily – that terrifies the State/Corporate elitist at the top of our present system every bit as it does the State-dependent, State-programmed drones at the bottom.

Oh sure, they’ll say otherwise and even go so far as to claim full-throated support for such obviously wonderful things, but it’s all a lie.

Where the rubber meets the road and any way you slice it, the forces of centralization are all about compulsion. Without the ability to forcibly take the time, resources, and even life itself from those “under them”, these dinosaurs simply cannot exist. They cannot live in a land of true freedom.

We’re living in an age of terrifying change for those who love and adore the notion of government-managed education, medicine, economics and the like (and let’s be clear here: that camp includes a whole lot of professing Christian conservatives). Zombie dinosaur systems like public schools and other education-themed distribution models are now rotting so badly that even most ardent public school fans are having to admit to realities that they seemed to effortlessly deny or deflect for decades or even generations. But no more. The stench clouds bellowing from the shambling corpse of public education have become far too obnoxious to dismiss.

The same goes for the scourge of central banks and their black magic money-out-of-thin-air-for-them (but not you or me) scheme.

Dinosaur approaches to controlling professions, business, economics, and education are on their last legs. We all know it…or we all should know it by now.

Even so, many still cling to these beloved zombies as they hobble inevitably toward their ultimate collapse.

These things are the well established norm for many. These centralized approaches to managing our lives and protecting us from the threat of freedom, liberty, and actual adulthood are so established that, for most of us, they’re assumed.

Public schools are just good ’cause that’s just how it is.

Governments just print money out of thin air and pay for our dependence because that’s just how it is.

And on and on it goes…or was supposed to go.

The systems sold to us as good, virtuous and necessary to our well being are being revealed as quite the opposite, and these revelations are coming in waves. Ever larger and more frequent waves, exposing multigenerational lies and washing them away like sand at high tide.

So dramatic is the level and frequency of change sweeping over us that even the basic idea of “the real world” itself isn’t so basic or so obvious anymore, especially for those clinging to old, dying ways of doing things.

Where once gatekeepers and agenda-driven “professionals” controlled the flow of knowledge, resources, business, professional licenses, media, and everything else, their grip has been shattered, allowing the increasingly free flow of…everything.

Which, again, terrifies those most invested in (or dependent upon) the old centralized power schemes that are crumbling around us.

The free flow of knowledge, resources, professional pursuits, business, economics…these things are the enemy of the statist and the state dependent precisely because they promote true adulthood.

And we can’t have that, now can we?

Thankfully, and by God’s grace, yes we can, whether Google, Facebook, or the US government likes it or not. We can have true adulthood. We can have true freedom, liberty, and privacy, with all the risk and challenge that comes with it.

In The Case for Dropping Out of College, Quillette shared some interesting insights on the growing awakening in the area of education, a favorite topic of ours here at Fire Breathing Christian. Here’s a sample from the article (which I highly recommend):

“According to the not-for-profit College Board, the average cost of a school year at a private American university was almost $35,000 in 2017—a figure I will use for purposes of rough cost-benefit analysis. (While public universities are less expensive thanks to government subsidies, the total economic cost per student-year, including the cost borne by taxpayers, typically is similar.) The average student takes about 32 credits worth of classes per year (with a bachelor’s degree typically requiring at least 120 credits in total). So a 3-credit class costs just above $3,000, and a 4-credit class costs a little more than $4,000.

What do students get for that price? I asked myself this question on a class by class basis, and have found an enormous mismatch between price and product in almost all cases. Take the two 4-credit calculus classes I took during freshman year. The professor had an unusual teaching style that suited me well, basing his lectures directly on lectures posted online by MIT. Half the class, including me, usually skipped the lectures and learned the content by watching the original material on MIT’s website. When the material was straightforward, I sped up the video. When it was more difficult, I hit pause, re-watched it, or opened a new tab on my browser so I could find a source that covered the same material in a more accessible way. From the perspective of my own convenience and education, it was probably one of the best classes I’ve taken in college. But I was left wondering: Why should anyone pay more than $8,000 to watch a series of YouTube videos, available online for free, and occasionally take an exam?

Another class I took, Philosophical Ethics, involved a fair bit of writing. The term paper, which had an assigned minimum length of 5,000 words, had to be written in two steps—first a full draft and then a revised version that incorporated feedback from the professor. Is $3,250 an appropriate cost for feedback on 10,000 words? That’s hard to say. But consider that the going rate on the web for editing this amount of text is just a few hundred dollars. Even assuming that my professor is several times more skilled and knowledgeable, it’s not clear that this is a good value proposition.

“But what about the lectures?” you ask. The truth is that many students, including me, don’t find the lectures valuable. As noted above, equivalent material usually can be found online for free, or at low cost. In some cases, a student will find that his or her own professor has posted video of his or her own lectures. And the best educators, assisted with the magic of video editing, often put out content that puts even the most renowned college lecturers to shame. . . “

Now ask the simple, obvious question: How many degrees currently being aggressively sold by the “education” system are actually worth paying for? Of those that are worth paying for, how many are extremely overpriced in an age of free-flowing information?

How many college graduates emerge worse off after their “higher education” system experience?

Why do we keep propping up such ridiculous systems even as they fail more dramatically with each passing year?

Why do we keep feeding our children to this beast?

Thankfully, for a growing number of people, the answer is yes, we do want to know the truth…even though it can be painful at times.