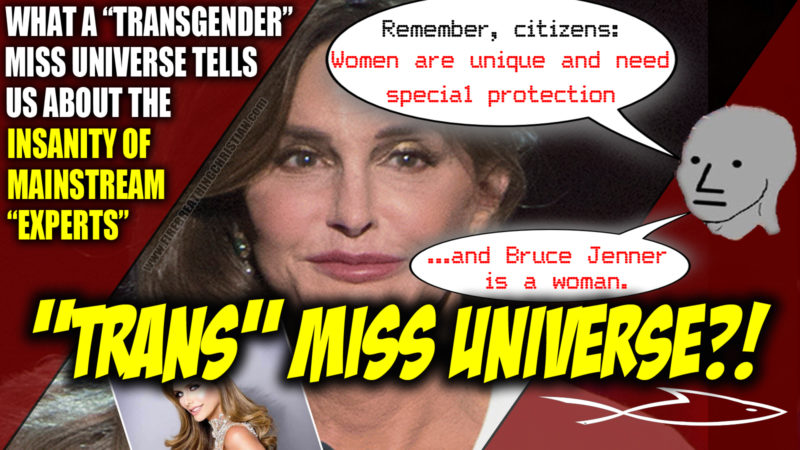 Remember when everyone understood that Bruce Jenner was a man?

Remember when generally healthy, sane men and women in America could and would, without fear or hesitation, publicly acknowledge that a man dressing as a woman was not actually a woman and was, in fact, still a man?

Before diving into a frustration- or nostalgia-fueled adoration of the past, it’s important to remember that the off-the-rails crazyland culture we’re swimming in now is the result of whatever we were doing back in the ’70s and ’80s, and the ’70s and ’80s are largely a product of the parenting approaches of adults in the ’40s and ’50s, so…let’s just say that trajectory is a thing, and that trajectory is something we should pay close attention to when assessing past periods of time that we’re tempted to idolize.

Now back to the train-wreck of today…

Today to calmly and clearly declare that Bruce Jenner is not a woman is a profoundly controversial statement in “the land of the free and home of the brave”.

Saying such a thing is hateful.

Such behavior must be crushed, corrected, and remolded.

You know, because “tolerance”…

At least that’s how most system-anointed “professionals” and “experts” see it these days….which helps greatly in explaining why the systems they dominate are rotting and falling over dead all around us.

They’re circling the drain. Their time has passed. The jig is up.

They’re in their death throes.

And that’s a good thing, however frustrating it may be to watch and experience as it unfolds.

Two things for your consideration in this context:

First, an insightful article posted recently at National Review, entitled The Progressive Patriarchy. The article does a fine job of chronicling some of the more glaring bits of insanity defining the Progressive movement as it lurches towards its grave (while trying to drag us along for the ride, of course). Here’s a sample:

In the Hans Christian Andersen tale, the emperor had no clothes. These days, if the emperor puts on the right clothes, he can call himself an empress. And we all have to applaud.

Translation: “Yesterday’s Miss Universe contest featured, for the first time in the event’s 66-year history, a man.” There. That’s better. The article continues…

“Competing as Miss Spain, Angela Ponce entered the pageant to much acclaim, writing in an Instagram post: “Today I am here, proudly representing my nation, all women and human rights.”

First off, my condolences to Spain. When your best entry into the Miss Universe thing is a man, things are obviously beyond awful in your country.

When a man claims to represent all women and the idiot media champions his proclamation as not only legit but downright beautiful, well…you can write off said media as utterly insane and incapable of observing, much less critiquing, even the most basic elements of reality.

Back to the NR piece…

“Ponce didn’t win, but the 27-year-old has been hailed by the media merely for competing. “Miss Philippines Catriona Gray took home the crown at the 2018 Miss Universe pageant on Sunday night in Bangkok, Thailand, but she wasn’t the only winner of the night,” a writer for ABC News declared Monday morning. “Miss Spain’s Angela Ponce became the competition’s first transgender contestant, a major step for the 66-year-old pageant.”

“In the wake of a Victoria’s Secret fashion show that many feel failed on the inclusivity front, Spain’s Angela Ponce is poised to make history as the first transgender woman to compete in Miss Universe,” a Yahoo! News writer began her article on the topic. The NBC News feature on the Miss Universe competition didn’t even mention Monday night’s winner until four paragraphs into the article, focusing instead on how Ponce “broke barriers.”

Remember: These impossibly imbecilic, hopelessly moronic observations are being publicly spewed and promoted as “professional journalism” offered up by the “experts” at ABC News and Yahoo! News.

They all think that Bruce Jenner is a woman.

And they want you to as well.

They insist upon it.

They require your agreement with this laughably inane contention.

But that’s not all.

They want you to love, adore and celebrate it.

They want you to publicly proclaim the beauty and majesty of men competing for Miss Universe and Bruce Jenner literally winning awards for courage after “coming out as a woman”.

Think about that word.

Think about how wackjobs like the man competing in the Miss Universe pageant are presented as paragons of courage (and all other virtues) while actual men and actual women who courageously speak out against this insanity are portrayed by the same gaggle of programmed “experts” as hateful and – get this – a threat to civilization.

When I write about how Bruce Jenner is not a woman, I am not being courageous. I am being hateful. And I must be punished.

So goes the view of Corporate America and its tools at CNN, ABC, Microsoft, Amazon, Google, Facebook, YouTube, ESPN, AT&T, Verizon, Coke, Macy’s, NBC, CBS and on and on it goes…

These are the “professionals” we’re supposed to trust and look to as reliable sources for news and guidance, yet they quite obviously cannot accurately identify even the most basic of truths.

Like the difference between a boy and a girl.

The article goes on to note how the new Progressive Patriarchy cannot abide pesky things like science (which Progressives routinely claim to adore):

“All of this fanfare raises the inevitable question: Could Ponce actually “represent all women” without being a woman at all? In our unscientific moment, so much as asking this question is enough to warrant being drummed out of polite company in certain circles.

Dwell for just a moment on the reality of Ponce’s biology — a reality that, no matter how much cosmetic surgery Ponce obtains and regardless of whether Ponce truly feels like a woman, cannot be altered. Technology might disguise that truth, but no amount of medicine or mutilation can coax Ponce’s chromosomes into submission. . . “

Not the “experts” and “professionals” manning the bullhorns and anchor desks at major corporate-controlled media hubs, apparently.

Nope, biology is for haters.

The second item I’d like to share for your consideration in this context is a video that we posted last week, wherein we dove into the Progressiveism vs. Sanity subject:

If the above embedded player doesn’t work for you, you can access the channel directly by clicking here.

Remember: As crazy bad as things seem (and actually are) right now, these are the latter stages of a movement that will ultimately flame out and die, as every mass truth-denying, anti-Christian movement has before it.

So keep your eye on the ball and stay frosty. Optimistic too.

Bruce Jenner is not and never will be a woman.

Any movement viewing that as a controversial or destructive statement is not long for this earth.