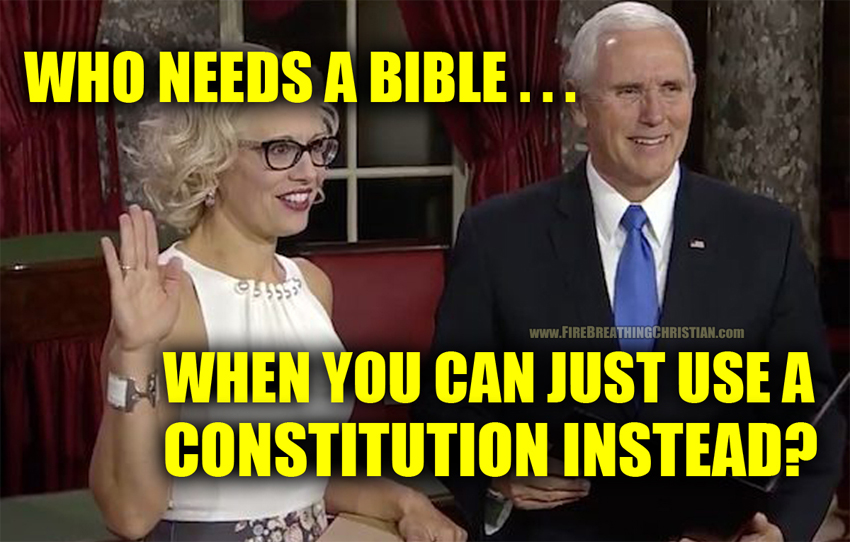 So why be shocked and/or outraged?

Isn’t a bisexual Bible-hating type exactly the sort we should expect God to send to lead us at this point as we continue to cling to satanic counterfeits of liberty as “the American way”?

While all of the pseudo-conservative “shock” and “outrage” over Senator Sinema’s choice is pathetic, it still has value in that provides great clarity as to just how far gone we are under the judgment of the God who we will not hear, much less fear and obey as Lord, when it comes to matters of politics and government.

Which is why you could easily read 1,000 “Christian/conservative” articles covering this story without getting the Big Point being covered here.

Breitbart, a “conservative” fave, covered the story this way:

“Newly elected Arizona Sen. Kyrsten Sinema refused to be sworn in on a Bible, opting, instead, to place her right hand on a book of laws, including the U.S Constitution and the Arizona Constitution.

The book Sen. Sinema placed her hand on to be sworn in came from the Library of Congress, her office told the Arizona Republic.

“Kyrsten always gets sworn in on a Constitution simply because of her love for the Constitution,” the senator’s office said. . . “

Ah, the ol’ “love for the Constitution card”.

Let’s talk (and hopefully think) about that for a sec.

Is there anything wrong with loving the Constitution?

But you can love it too much. (This statement ironically constitutes heresy to the thoroughly programmed Americultist.)

And many Americans do love it too much…including most on the Right/conservative/Christian side of the political spectrum.

As we should be learning these days, there’s something terribly wrong and inescapably destructive about loving the Constitution (or anything else) more than the Word of God. But we’re not learning that, are we? We’re not yet willing to treat Jesus as Lord in practice, so we continue to suffer the consequences…more and more consequences…with little sign of repentance replacing the pride that we’re counting on to “make America great again”.

The American Right (of which I am a part) has almost completely sold out to satanic views of religious pluralism and the role of the state in education, economics, and everything else, which has left our “leaders” (and most who follow them) utterly unable to coherently argue against the very fruits of religious pluralism that are embodied by the likes of Senator Sinema.

So don’t blame her for sending our culture on its present rocket ride to hell.

The real problem is a nation loaded with professing Christians who couldn’t care less about what King Jesus has commanded in the realms of politics, economics, and education.

The problem isn’t Senator Sinema’s dismissal of the Bible.

The problem is American “Christians” who taught her to do so by example.