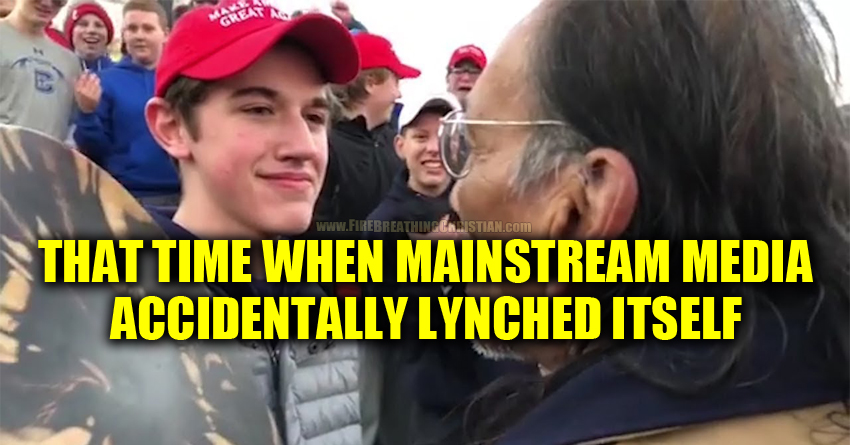 No sooner had Cultural Marxist “Social Justice” pimps and pillagers prepped and peddled the nooses by which a group of white (!) male (!!) Catholic (!!!) MAGA-hat-wearing (!!!!) high schoolers were to be promptly hanged and lit on fire to chants of “burn the heretics!” for the unpardonable crime of not instantly and completely submitting to the enlightened desires of someone clearly several levels above them in the Cultural Marxist Hierarchy of Power, a little thing called “the truth” got in the way of their blossoming lynchapalooza, transforming the attempt at SJW-style Public Education into a full-blown Category 5 Fake News disaster. Before corporate-programmed mainstream NPC media personalities and the frothing Leftist hate mobs they inspire could even savor their opening salvo of piranha-like feeding upon the white (!) male (!!) Catholic (!!!) MAGA (!!!!) targets of opportunity, the real media had already exposed the Fake News “Social Justice” Narrative spin on things in this instance as not only untrue, but as something quite near the complete opposite of truth.

It’s gotten so bad so fast that the marks who were being aggressively savaged and prepped just days ago for public execution by mindless “Social Justice” mobs at the behest of their “professional” leaders are now widely understood to be the actual victims of an actual attempted lynching.

But wait, it gets even better: These targets of the attempted Social Justice lynching in question are now apparently on the verge of: A) Meeting with President Trump at the White House, and B) suing many Fake News “experts” and SJW “leaders” into oblivion.

ZeroHedge covered the delicious story in an article titled “Covington MAGA Kids To Meet With Trump; Families Plan To Sue After MSM Witch Hunt Results In Death Threats”, which chronicles this latest implosion of NPC/Fake News media as follows:

“According to Fox News‘ Laura Ingraham, President Trump will meet with the Covington Catholic students at the center of a viral encounter with a Native American man on the steps of the Lincoln Memorial (who has lied about the incident),after the left was whipped into a bigoted frenzy over the image of a grinning student Nick Sandmann standing his ground while the tribal elder pounded away at his drum.

Liberals seized on the short clip to condemn the Trump-supporting students, only to backpedal furiously after footage of the entire incident exonerated the kids.

…Trump weighed in on the encounter on Tuesday, tweeting: “Nick Sandmann and the students of Covington have become symbols of Fake News and how evil it can be. They have captivated the attention of the world, and I know they will use it for the good – maybe even to bring people together. It started off unpleasant, but can end in a dream!”

Following the left’s shameful knee-jerk reaction to the incident, several Covington Catholic High School families plan to sue media outlets which participated in a mob-rule campaign against the students – which resulted in doxing and death threats, according to PJ Media.

Los Angeles attorney Robert Barnes offered to represent the Covington kids for free in a Sunday tweet, and told PJ Media that he was working with families to sue media outlets which smeared the Trump-supporting teens. . . “

So yeah, this is not a good moment for centralized corporate-programmed media.