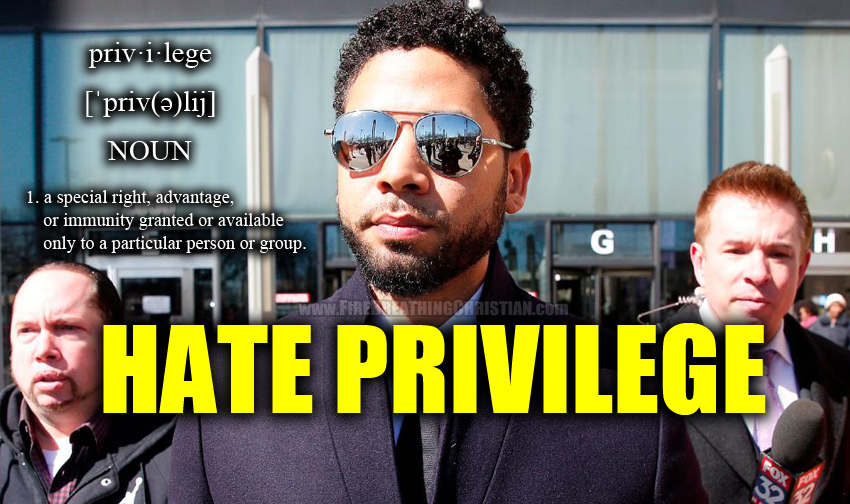 #HatePrivilege is all the rage.
.
In our culture, some people are not only free to hate, but are encouraged to do so at every turn by corporations, governments, and even “progressive” churches…all in the name of “fighting hate”.
.
Here in ‘Merika, if you want to openly discriminate against, oh, let’s just say for example openly Christian white heterosexual men when it comes to filling corporate or government positions, you’re not only emphatically and redundantly encouraged to do so, but you will be rewarded and protected by the state and its corporate sponsors as you pursue hiring policies defined by such rank bigotry…all in the name of “fighting bigotry”, of course.
.
It’s all about protecting and promoting The Narrative.
.
Conformity with The Narrative is everything.
.
The Narrative transcends good and evil, and from that transcendent position it perpetually redefines good and evil as the needs of The Narrative dictate and evolve.
.
The Narrative defines justice.
.
The Narrative defines fairness.
.
The Narrative defines everything, always on a sliding (or maybe slithering?) scale.
.
The Narrative will tell you who and what to hate and destroy, as well as who and what to protect no matter the cost.
.
Objective standards of virtue and honor getting in your way?
.
Pangs of guilt and conviction bringing ya down?
.
Annoying church and family structures holding you back?
.
No worries!
.
Just ditch ’em!
.
It’s that easy.
.
Anything getting in the way of you living your life on your terms as you see fit at any given moment simply must go!
.
So says The Narrative.
.
The Narrative will tell you which parts of the Bible to take seriously (few, and only in isolated snippets taken out of context), which parts to ignore (most), and which to openly repudiate (a large and ever-growing number).
.
The Narrative will tell you that openly discriminating against groups like Christian white males is just fine – necessary even – while at the same time blathering on about the notion of “equality”, “fairness” and “justice”.
.
The Narrative will help you to identify and embrace all of the right prejudices so that you can brutally act out upon those bigotries without worrying about things like objective, consistent standards of truth and morality.
.
That’s the idea, anyway, and it’s a wildly popular one these days, even in many large swaths of the professing Christian subculture (see: The “Gospel” Coalition).
.
Bizarrely incoherent and inconsistent appeals to things like racism and sexism are now routinely used even within “conservative Christian” circles to launch emotion-driven rants and assaults on civilizational cornerstones like biblical church and family structures, so it should come as no surprise that the broader culture is embracing the same trend.
.
If so many “Christians” are now towing Marxist lines on family, church, and gender, how shocked should we be that unbelievers are diving into the same worldview dumpster?
.
Not very.
.
Down with the patriarchy! (And any other inconvenient biblical structure defining things like family and church.)
.
Make white men pay!
.
Purge history of those deemed unworthy by The Narrative!
.
When these ideas are chanted and championed by large numbers of self-identified conservative Christians, we should be anything but surprised at the sad state of our culture where the subject of “privilege” is concerned.
.
Which leads us to Hate Privilege.
.
Which leads us to Jussie Smollett, a raging anti-Christian homosexual black guy who’s even now being (unintentionally) used to teach us much about the true state of privilege in Amerika.
.
ZeroHedge covered the most recent developments in Smollett’s increasingly interesting situation as follows:

“President Trump says the FBI and Justice Department will investigate the circumstances surrounding the dismissal of 16 felony charges against Empire star Jussie Smollett, who Chicago PD accused of staging his own hate crime.

Two Nigerian-born brothers caught on surveillance camera buying ski masks and red hats were ready to testify that Smollett paid them $3,500 to stage the January 29 attack, and that the 36-year-oldactor was behind a threating letter received a week prior.

After Michelle Obama’s former Chief of Staff, Tina Tchen contacted State’s Attorney Kim Foxx, however, charges against Smollett were dropped. Prosecutors said that Smollett’s debt to society had been paid in the form of $10,000 and 16 hours of community service he had already performed over two days at Rev. Jesse Jackson’s human rights coalition.

The sudden dismissal enraged Chicago PD, while drawing a harsh rebuke from Superintendent Eddie Johnson and Mayor Rahm Emanuel – who called it a “whitewash of justice.”. . . “

A favorite term used by the same Forces of Tolerance that would have us tear down biblical family and church structures so that “better” things might be built in their place.

If you wanna make an omelet, ya gotta break a few eggs, right?

If you wanna make a world where all of humanity is equally enslaved and destroyed by its self-centered, emotion-driven passions, ya gotta tear down the biblical structures that define healthy family, church, and civilization.

The ends justify the means, and make no mistake: The endgame of cultural Marxism (even in its faux-Christian incarnations) is always and inevitably the destruction of true peace, tolerance, justice, fairness, family, church, and any other God-given thing necessary to the formation of a healthy, flourishing civilization.

It all boils down to a question of standards, as in: By what standard will we understand and pursue reality?

By what standard will we define healthy family, church, and cultural life?

By what standard will we define justice and liberty?

The Christ-centered Word of God?

Or the self-serving narratives (and false gospels) of men and women who will not have King Jesus to rule over them in detail?

The answer to that question will determine the fate of every culture in God’s creation (see: Psalm 2).

May we repent accordingly while there is yet time.

May we grow, by God’s grace, to love what He loves and hate what He hates, all in accordance with His Gospel-fueled Great Commission, all for His glory, and all to the eternal benefit of His people (see: Matthew 28:18-20).

Now that’s a narrative worth following…