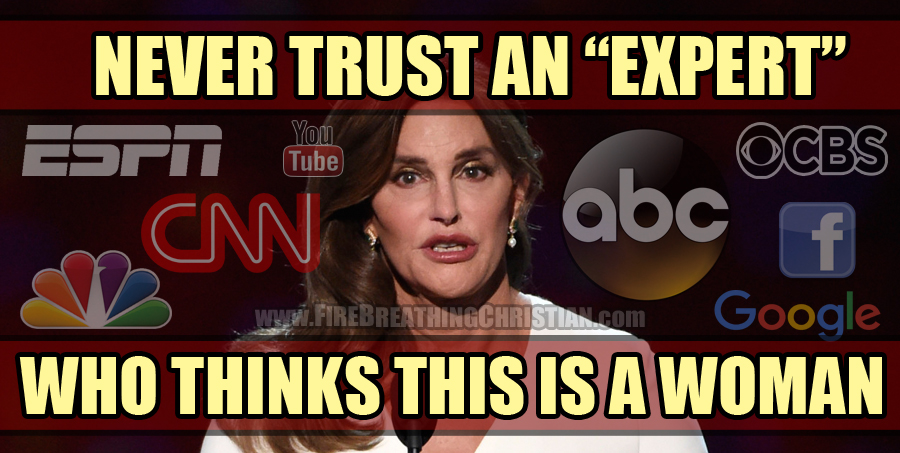 One of the more fabulously gaudy signs that we’re living in a fast burning age of chaotic nuttiness is that we’re simultaneously pitched mindless slogans like #BelieveAllWomen alongside the crackpot crazy contention that Bruce Jenner is a woman.

The same stone cold idiots telling us that men must give way or defer to women in various professions due to things like past and present discrimination against women are also telling us that men identifying themselves as women should be allowed to compete in things like women’s mixed martial arts tournaments and weight lifting competitions.

So how’s that working out?

For actual women, I mean? (Hint: Think of an actual women being pummeled to a bloody pulp by a man-pretending-to-be-a-woman in an MMA tournament.)

For actual women, it’s going another.

Could there be anything more anti-woman than this?

Is there anything more disrespecting and devaluing to actual women and actual womanhood than literally replacing both with men?

This is some bottom o’ the barrel woman-hating stuff goin’ on here.

Yet many still persist in propping up the demonstrably destructive and categorically insane notion that men can be women by simply identifying themselves as such. (For more as to why this is happening and where it goes from here, check out Romans 1 while it’s still legal to consult such material.)

So who exactly is perpetuating this woman- and womanhood-hating lie?

Who are these woman-hating people and why are we taking them seriously? Why are they given platforms from which to spew their crackpot craziness? Why are we not just laughing in their faces every time they pose as intelligent, thoughtful wannabe shapers of culture and society?

Who are the stark raving nuts promoting the laughably asinine notion that Bruce Jenner is now a woman and that any man can, like Bruce, become a woman simply by identifying as such?

Why they’re our major media, corporate, and government “experts”, of course.

Many of the same wackjobs pitching Bruce-is-now-a-woman (and insisting that we do the same) while also claiming to champion women’s rights are also the education/economics/law/art “experts” infesting Washington DC, most state capitols, ABC, ESPN, NBC, Disney, Google, Apple, CBS, YouTube, MSNBC, CNBC, and most corporate boardrooms in the “land of the free” and the home of the NSA.

The same “experts” telling us how things like education, economics, business, law, and art ought to be understood and pursued in the real world are people who believe that Bruce Jenner is a woman.

Then prepare yourself to laugh out loud the next time one of these reality-hating “experts” pretends to know the way forward to a happy, productive culture and civilization.

The faster we ditch the “expert” tools that have been used to undermine women, womanhood, and femininity, the sooner we’ll be able to rebuild the culture they’ve been raping and pillaging for generations.

The sooner we man up and shame these morons off their pop culture perches and into irrelevance, the sooner we’ll be able to protect women from the relentless waves of hate being steadily shoveled their way in the name of progress.