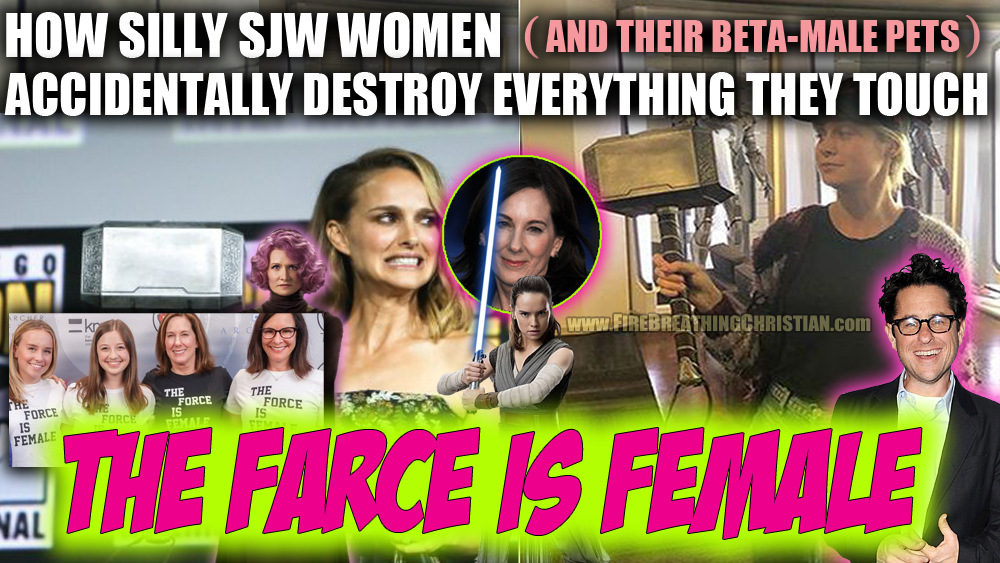 What happens when silly women and their beta male pets get hold of one of – if not the – most popular, profitable, inspiring and valuable intellectual properties in existence?

They wreck it, of course.

Since the same silly women and beta male gang in question tend to insist on the selective application of group divisions and distinctions (identity politics), it’s important for me to note that by “silly women” I am not referring to all women. Nowhere close. The silly women addressed here are, thankfully, a distinct minority within the population of women as a whole (which does not include Bruce Jenner, for those who might be wondering). They are, generally speaking, pouty, destructive, man-wannabes who hate The Patriarchy and are happy to do whatever – or ally with whomever – seems to best or most effectively undermine gender roles and distinctions.

These silly women are aided, enabled, and slavishly served by beta male types who are all too eager to hand over the mantle of manhood to girls. They cherish and seize opportunities to prove their loyalty to by regularly taking shots at The Patriarchy and promoting the Progressive/Woke/Identity Politics narrative that would lead our culture even deeper down a silly, suicidally self-destructive path that is willing to literally sacrifice everything to the twin dark comedic pillars of:

For those who’ve wondered what Romans 1 means as it describes the insanity that consumes a culture on its way down the drain and off the playing field in God’s creation, we need look no further than the 2020 United States of America for a vivid, detailed, and darkly comedic example.

Right here and right now we’re watching the nuttiness hit levels that were unimaginable just a few years back.

Business, Art, Economics, Family, and now even the very nature of boys and girls are under siege. We live in an age of utterly fake markets driven by fake wealth (fiat currency), art that is openly at war with beauty and inspiration, and the unravelling (largely by preemptive surrender) of the family.

Where business intersects with the arts, we’re seeing that the primary goal of Woke/Progressive types given power and control isn’t to “make money”. Contrary to the assumptions of older “conservatives”, the primary driver of businesses consecrated to Woke ideology is not the pursuit of bottom-line profit. The Progressive Narrative trumps even that.

So it is companies like Disney can and will happily absorb, repurpose, and ruin once indescribably profitable properties form the sake of advancing its Woke/Progressive narrative.

This brings us to Star Wars.

The death, burial, repurposing, and resurrection of Star Wars under Mickey Mouse’s watch has done much to reveal the truly blind, destructive nature of silly anti-Patriarchy women and their beta male pets/allies.

Where once Star Wars was recently known as the ultimate golden-egg-laying goose where intellectual properties were concerned, it is now on a previously inconceivable multi-year downward trajectory that has already managed – quite remarkably – to produce a money-losing movie (Soylo) while dragging the brand down so far that a large chunk of the fanbase that propelled it to greatness has left it in disgust.

All to the cheers of Woke Progressives – both in the corporate towers of Disney-esque culture-wrecking command centers as well as in the front lines of fandom, where Woke foot soldiers dutifully regurgitate corporate talking points in defense of the beauty of the transformation of Star Wars.

I’ve has more than one “Reformed, conservative Christian” defend recent box office performance downtrends for the Star Wars franchise by coting how “Disney will be fine” where the overall bottom line is concerned.

That’s a line I hear from more than a few “conservative Christians” who are determined to defend the radical leftists politicization of Star Wars.

Where once Star Wars was built around classic heroic tales featuring strong story arcs and character development through struggle, failure, more struggle, and ultimate triumph through great adversity, now we have Mary Sue insta-Jedi+ prancing through plots loaded with Death Star-sized holes consecrated not to anything remotely resembling quality storytelling, drama, or art, but instead centering on the open mockery and dismissal of men, manhood, and The Patriarchy at every turn.

It’s this context that makes Disney’s rank perversion and repurposing of Star Wars so interesting and important as a reference point heading into 2020. In that spirit, I’d like to share 10 items of interest – five positive and five negative – where the current state of Star Wars is concerned, so that we might see and appreciate the many ways in which God is working even through this Mouse-manipulated monstrosity to ultimately accomplish the establishment of the arts, culture, and civilization so hated and opposed by the Wokesters lapping up and propping up things like Disney “Star Wars”.

Before diving into details, I should probably mention that I haven’t seen the new Disney flick in question (Star Wars Episode IX: The Repurposing of Skywalker) and I have no plans to do so, at least during it’s theatrical run. I’ll probably check it out via Netflix or Redbox in a month or two the same way I did Disney’s last faux Star Wars entry (Soylo). This is noteworthy for several reasons, including:

With all o’ that said, let’s dive into our 10 Points, beginning with the five negatives…

Obviously there are many more points and details we could (and perhaps should) get into where examining the Woke/Progressive worldview and theology as it displays itself so vividly through Disney “Star Wars”. But we’ll pause for now, save that for later, and get into a more positive groove by diving into five great positives made plain (accidentally, of course) through Disney’s perversion of Star Wars:

On that happy note, I thank you for reading and considering these things.

I hope to resume a regular posting schedule soon as 2020 dawns and I hope to explore subjects like this in more detail in the near future.

I’ve had a lot of positive changes come in the last couple of months – new work, new projects coming into focus, and a new residence that I’m moving into this weekend (and painting/fixing up now). I look forward to sharing more project and work relted details soon, including some cool video collaborations that will be coming this year.

In the meantime, thank you for your patience, prayers, and support.

Because God is using everything – including  to pave a particular way forward through His creations of time and history so that His people can and will build better fiction, art, and culture, all by His grace, all for His glory, and all in accordance with His Gospel-fueled Great Commission.