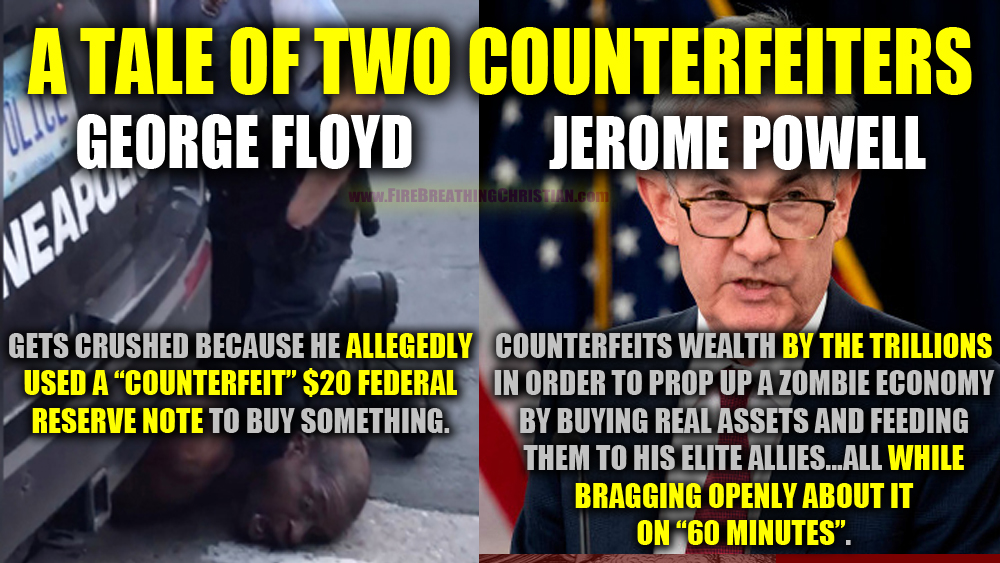 When Federal Reserve Chairman Jerome Powell goes on 60 Minutes to explain how his private banking consortium has the ability to type currency into existence out of thin air in virtually unlimited quantity and then use that counterfeit wealth to buy up all manner of real assets on a massive and potentially all-consuming scale, we are told that this is perfectly reasonable and that putting that power to use may well be necessary to “save the economy”. (Which, in and of itself, should tell you how distorted, sick, and downright evil our economic system has become.)

Let that sink in: The Federal Reserve – a private organization, despite its intentionally deceptive name – can effortlessly create artificial (counterfeit) wealth out of thin air and then use that counterfeit wealth to purchase real assets that produce real wealth in the real world. There is no work involved. There is no sacrifice required apart from the few seconds of time it might take to type digits on a keyboard.

Where you and I are told that it’s right, good, and necessary for us to sacrifice practically, if not literally, all of our time, talent, and even our family life in pursuit of tiny scraps of currency that these elites create out of nothing, the people managing and primarily benefitting from this system are to endure none of that. They are protected from risk through perpetual bailouts. Their asset bubbles are constantly inflated or re-inflated by massive currency creation programs. They routinely have mountains of freshly crafted cash dumped on them during times of extreme economic distress for the rest of the nation.

This is why stock prices are booming as Main Street America sinks into oblivion.

The more Americans are unemployed, the more Main Street business are decimated, and the more U.S. cities burn, the higher the stock market goes. What greater evidence could there be that our phony, warped, and evil economic system is designed to feed the few off the hard work and sacrifice of the many by way of what is known as fiat currency – artificial wealth crafted at will out of thin air? This is the bizarre, nightmarish reality that is quickly becoming clear to many. One important concept to keep front and center as this awakening unfolds is that of counterfeiting.

The fact of our counterfeit-wealth-driven economic reality is essential to a right understanding of what’s going on right now in the United States and around the world. If we miss this core component of the reality in which we’ve been placed, we will fall for any number of destructive distractions and diversions offered up routinely these days (including the flagrantly absurd myth that we “had a strong economy” before Coronavirus came along).

This is the context in which the George Floyd travesty takes on an added layer of profound meaning. Before going deeper into this, please note that I’ve not done a deep dive into every aspect of the unfolding George Floyd story and I am very much open to revising my understanding of things based on future access to relevant facts and evidence. That said, it seems clear now that Mr. Floyd was killed by police after being taken into custody for…allegedly using a counterfeit $20 Federal Reserve Note to buy some food at a deli.

Maybe think it through a couple of times to get a solid sense of the hard realities on display in this scenario.

George Floyd allegedly used a counterfeit $20 Federal Reserve Note (which is itself counterfeit wealth) and was taken into police custody as a result…just days after Jerome Powell bragged openly on 60 Minutes about his ability to effortlessly create counterfeit wealth out of thin air and then use that counterfeit wealth to buy billions and even trillions of dollars worth of real assets (like home mortgages, for example).

George Floyd allegedly tried to buy a sandwich with a counterfeit $20 piece of paper.

… while Jerome Powell and the Federal Reserve brag openly about their power to potentially buy every real asset in the country using counterfeit wealth.

George Floyd is taken into custody for his “crime”.

… while Jerome Powell and the Federal Reserve are heralded as “saviors of the economy” and defenders of the American way of life.

It’s important that we don’t miss the telling detail that while George Floyd was accused or suspected of seeking to benefit from counterfeiting, Jerome Powell and the Federal Reserve openly boast about their creation and use of counterfeit wealth on a massive scale.

That’s the system we live under…for now…but probably not for long, thank God.

King Jesus is completely serious about His command to repent, believe, and be saved from the destruction that is both deserved and guaranteed apart from submission to Him as Lord in every area of life.

When we pursue that path of repentance and submission to Him, we will find true justice in all things. When we rebel against His rule as Lord, we will find ourselves increasingly deceived, enslaved, and abused by systems like the wealth counterfeiting scheme of Jerome Powell and the Federal Reserve.

May God grace us with the brokenness necessary to lead to true, deep, and meaningful repentance, so that we might repent of our pride and seek to build everything, including our approach to economics, business, politics, and justice on the perfect Nature of God as revealed in His Word.

May we be blessed with a clarity of mind and a desire for truth, however temporarily painful its revelation might be, so that we can recognize the insanity of arresting one man for allegedly using a counterfeit bill to buy a sandwich while empowering others to openly brag about their ability to purchase everything using counterfeit wealth.