This is the day that the plan comes to fruition in full view of everyone. The attempted murder of democracy by Democrats is on open display.

This is not a matter of an election being stolen. It’s a matter of an entire system of control being destroyed in a spectacular display of self-immolation after generations of deceit-drenched manipulation of the masses.

It’s also a matter of a veil or fog being lifted. People are waking up to long-avoided realities that they can no longer ignore. That awakening is one of the many great blessings that our would-be overlords have accidentally launched into high gear through their last-ditch mad grab for total power.

So what do we do about it?

The first thing that we must do is calmly and openly acknowledge that this system is illegitimate and that the present situation is intolerable. Without consciously taking this first essential step into reality, every other thing we might consider doing to address the situation is likely to be entirely ineffective or only minimally helpful in ways that are short lived.

We cannot continue to play their game.

More importantly, we must replace their system of counterfeit freedom, counterfeit justice, counterfeit economics, and counterfeit elections with a system rooted in the true freedom, liberty, prosperity, and responsible adulthood that their counterfeit system is designed to destroy.

To that end, we must accept and begin to understand the significance of several key components of our bondage that have been on open display for generations, yet are only now coming into full bloom. These system-stamped implements of mass slavery and control include fiat currency and fiat votes – two things that you will never hear accurately described, much less seriously examined, in state-controlled public schools or corporate-controlled media.

For generations we’ve been programmed and encouraged at every turn to accept the inherent legitimacy of an economic system built upon counterfeit wealth created effortlessly out of thin air by a few who are then able to use that fake wealth to buy very real assets – assets like land, mansions, mega-businesses, and, of course, politicians.

Though this open and easily observable process, the elites empowered by the system to counterfeit wealth then use that wealth to effectively own and control everyone and everything beneath them.

They effortlessly type wealth into existence by the tens of trillions. You and I then literally spend our lives chasing after miniscule scraps of the thing that they made out of nothing.

In this, fiat currency is fiat slavery.

The mass slavery and cultural manipulation made possible by this system is anything but accidental. It’s as purposeful as a thing can be.

In similar fashion, the secret ballot has long been an infinitely and excruciatingly easy-to-manipulate tool of the system. By selling the notion that political power (all of which relies on the coercive power of the state to impose compliance by force) should be wielded by people in secret, the untraceable, un-trackable nature of our “votes” in detail has been secured and enshrined as a virtue of our system.

The very people and systems that we know we cannot trust with our freedom, our liberty, and practically anything of value, we thoughtlessly assume will take great care to respect and honor our vote as we hand it over to them. We cannot track our vote. We cannot confirm that our individual vote has been recorded accurately, or at all. We just trust the system to handle it honorably.

Anyone who for even a moment thinks that a system that empowers some to effortlessly create counterfeit wealth out of thin air by the tens of trillions will hesitate for a nanosecond to alter, redirect, or ignore the votes cast by the masses is deluding themselves.

And we must stop deluding ourselves.

We must stop cowering and excusing the inexcusable, stand as adults, and deal with reality as it actually exists rather than how The System tells us it is. This will require our confronting many brutal, painful truths, including our own past complicity and advocacy for systems of mass bondage and manipulation that have existed for ages but are only now lunging out from the shadows and revealing their true character as the come into clear view.

We must start by understanding that most of the lies that have paved the way to where we are now are lies that we have loved. Many of them our lies that we love even now.

For this reason, we have to begin by confronting ourselves.

Only when we are willing to put our self-deceptions on the table will we begin to have a real chance of seizing this opportunity to build something beautiful and good on the other side of the banana republic dark comedy unfolding around us now.

In that context, and as a practical suggestion for action in this amazing time of challenge and opportunity, I recommend that those of us living in the land currently known as the United States of America take the time to calmly contact our state Governors and kindly ask them what contingencies are in place for our home state should the union cease to exist.

Should you accept this mission, it’s likely that you will learn that there is no such contingency in place since most state Governors are not accustomed to even considering such things because they are not real leaders, but are instead something more akin to department managers in a Walmart waiting to take orders from HQ/Mordor/DC. They tend to operate as branch managers for Swamp, Inc., even if they campaign as “Christian conservative” Republicans.

Even so, do not be discouraged.

Be patient. Be kind. Be as calm, cool, collected and clear as you are able.

Show them what you can of the grace that we all need to repent, believe, and be saved.

Help them to see what they need to see right now.

Help them to find the courage that they need have right now.

Help them to understand that the counterfeit world they’ve been immersed in and depending upon for a very long time is at this very moment coming to an end. 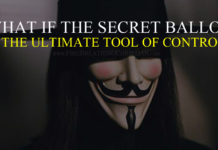