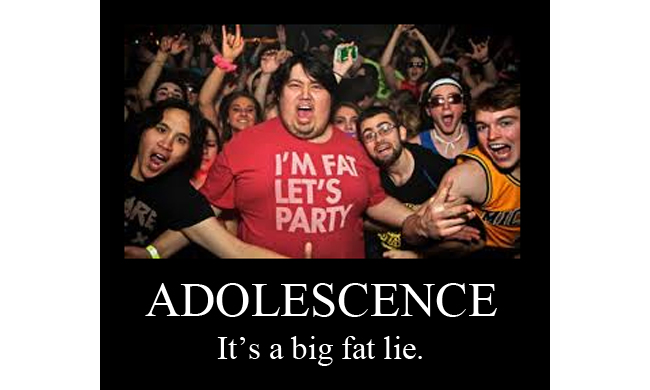 Did you know that 18-year-olds are not children?

Did you know that for the vast majority of human (and even American) history, people were understood to transition out of the “child” category and into the “adult” at around the age of 13.

Weirder still when we notice the total and complete lack of an “in between” category.

Apparently, these strange creatures that dominated the first 95% or so of human history seem to have gone from being children pretty much straight on into being adults.

No “adolescence” or anything like it for thousands of years of history and then – whammo! – we get a whole new category of “development” magically whipped up out of thin air by “experts” and “professionals”.

Did these experts have a biblical worldview?

Well, of course not, but who cares, right?

They went to school, read a lot of books, wrote a lot of papers, and then they did what experts like to do: They fundamentally changed the development of civilization by giving us adolescence.

So how’s that worked out?

Well…maybe a good way to answer that question is by asking another, like:

See how strange that even just looks in print?

It’s missing something. Something like maybe a “young” thrown in there somewhere to, you know, blunt the edge of this utterly foreign sounding “15-year-old man” concept.

The sad and obvious fact is that we have practically zero expectation of there being such a thing as a real, responsible 15-year-old man or woman. Oh, we might well believe that such a thing as a responsible, solid, adult at the age of 15 can happen, and that it even occasionally does, but we have no expectation of such a creature being anything remotely resembling the norm.

It was the norm once upon a time in America, but not so much anymore…and that incredibly significant, culture-transforming transition in norms has been anything but accidental…

Nope, what was once a given “back in the day” is now so acutely foreign to us that even the proposition of such a thing as a real, genuine mid-teen adult as a normal thing strikes us as not only odd, but wrong. The “experts” and “professionals” that gave us adolescence have done such a fine and thorough job in programming the population (primarily through generations of State-controlled “education”) that we now see the mass propagation of true functioning adults in their mid-teen years as a tragic thing to be avoided at all costs.

We’ve been taught to believe that perpetual childhood (in the worst, most acutely unbiblical sense) is a good thing and that to do anything to curtail or [*gasp!*] correct that approach to life is to do great harm and “cheat” young folks out of cherished “experiences” – experiences that were avoided like the plague by the mid-teen men and women who helped to define this culture when it was ascending.

Now we have the presumption of at least some experimentation with drunkenness and sex in high school (if not much, much earlier).

The accepted norm of “college life” in America is one of the most vibrantly damning examples of our culture’s plunge into God-hating oblivion.

The things that many professing Christians now embrace as “a part of the experience” is one of the most disgusting commentaries on the modern American Christian subculture -a subculture that has clearly been conformed to the world in every meaningful, measurable manner.

Just watch a ten minute clip of any accurate college-life themed movie if you can stomach it.

Instead, maybe seek out a 30 second movie trailer for one of those flicks on YouTube or something… No, wait!

Most of those are way too awful to recommend, even for research purposes…which makes the point quite nicely.

Where once there were 15-year-old men and women who were raised to cherish, desire, and pursue serious, beautiful adult lives at around the age of 13, we now live in an American era in which even most professing Christians are more than happily along for the high-school/college “phase” of life in which debauchery and vulgarity of all sorts are the norm. Where once 14-year-olds were raised so that they desired to flee immaturity and destructive things, they are now encouraged (often by “Christian” parents) to pursue those very things for the sake of “experience” and even enjoyment.

For the professing Christians along for the ride on the high-school/college debasement bandwagon, they are viewed to be doing well by just being a bit less debauched than their more openly pagan pals.

They are more often than not viewed this way and encouraged accordingly by their parents and even by their churches – churches whose “gospel” is about “getting them saved” so that they can do whatever they like. These churches and their “gospel” also tend to vigorously protect their followers from any pain caused by the true Gospel confronting sin as sin and commanding repentance and obedience to the Lord.

This is the desperately tragic reality of modern American Christendom – including a great many “good, conservative” churches.

The roles and responsibilities of children and parents are clearly and lovingly defined in Scripture. The same is true of the roles, responsibilities, and limitations of the three God-ordained institutions of human civilization: The family, the church, and the state.

Once those lovingly detailed, life-preserving standards were tossed out the window in favor of selfishness-enabling, maturity-crushing “expert” opinions, well…we were doomed.

The good news is that, by the grace of God, we have been given the opportunity right here and now to repent of our rebellion, abandon our idolatry of pleasure, and strive to submit to the only truths that can bring lasting, real joy, peace, happiness and prosperity to anyone a any time in any realm of creation.

The Word of God is clear. It speaks to education, anthropology, history, economics, politics, sexuality, and every other deep and important thing, and it does so in vivid detail so that we might be perfectly equipped for “every good work” that any man or woman might be inspired and called to do in the responsible, beautiful, Christ-honoring manner befitting an obedient adult image bearer of God.

Starting a around age 13, ideally.