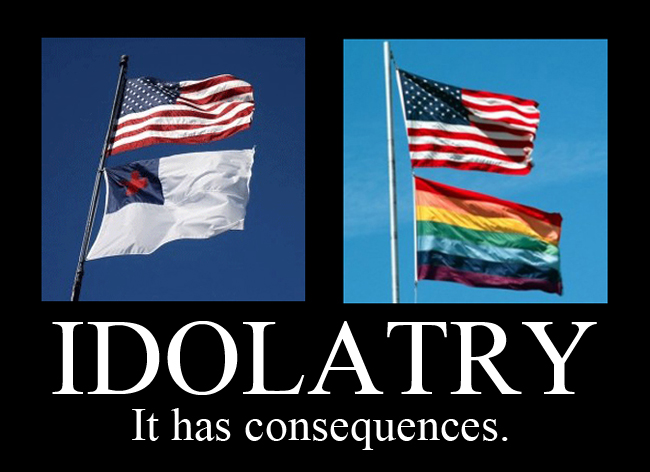 How necessary is America to Christ?

How necessary is America to Christians?

How submissive to Christ as King is the modern American Corporate State?

How has the pervasive, unquestioned Christian adoration of America been manipulated by those atop the U.S. Super State in order to distract, distort, and redirect Christian energy toward building and strengthening an increasingly obvious anti-Christian kingdom based on anti-Christian principles over and above the pursuit of obedience to Christ here and now in accordance with His grace- and Gospel-fueled Great Commission? (See: Matthew 28:18-20.)

How are we as ambassadors and warriors for Christ the King to test, understand, and address America as it is (as opposed to how we imagine it to be) so that we might love it and its people in a truly and effectively Christ-centered manner? (See also: How to truly love (and really save) America.)

These seem to be the sorts of questions that we need to be asking and answering right about now, while we are still allowed to do so publicly. They are also the sorts of questions least encouraged for said consideration by every “expert”, “professional” and appendage of the modern American Corporate State (including most 501 (c) (3) “churches”).

This is not a coincidence.

Back in the ’90s, when I first heard the term “post-Christian America”, it just fit. I didn’t have any trouble at all accepting and embracing the concept. It made perfect sense from the moment it first hit my ears.

While “post-Christian America” certainly represented a heavy idea, I didn’t fidget, flinch, or squirm at the simple, clear pronouncement that we were (and had been for some time been) living in an American culture that had abandoned its Christian-influenced foundations. That much seemed obvious then and has only become more and more so with each passing moment since.

How exactly one aims to define in detail the concept of “Christian America” really isn’t the point here. What I’d like to take a moment to focus on now is how certain assumed constants can unconsciously color our thinking, impact our worldview, and then be used by others to redirect our energy in a manner that is actually opposed to what we imagine ourselves to be supporting. More specifically in this context I want to tackle the assumption of America itself.

For most of us, the way that we think, act, plan and imagine is shaped significantly by the assumption of an ongoing America – more specifically: the ongoing secular government of the United States of America. It should be noted that this assumption is not necessarily limited to Americans (though it is much more prevalent with us, of course). People all over the world have, to varying degrees, been impacted by the purposefully peddled myth of the never-ending, ever-necessary government of the United States of America.

Of course, explicit advocacy of the necessity and immortality of a specific man-made government or Super State isn’t nearly as marketable and propaganda friendly as the more general, abstract notion of “America” and its routinely associated (and similarly vague/malleable) attributes of “liberty”, “freedom”, and “justice”. We’ve been well spun into conflating all of the best and most noble attributes of human civilization with “America” while being discouraged to notice, much less consider, that those doing the spinning, propagandizing, and “educating” for over a century now are those who are and have always been advocating the immortality and necessity of an ever-growing Super State government. (All while consistently and ironically eviscerating things like true liberty, true freedom, and true justice along the way.)

So it is that we as Christians need to take stock of a few things as we plan our move for Christ through this present post-Christian America phase and on into what appears to be the coming post-America Christian era.

One of the top items on our “To Consider Seriously” list ought to be the “assumption of America” that currently permeates the minds and dictates the actions of most professing Christians in the land. This particular assumption is even now being used very effectively in distracting Christians from their King, His mission, and their great opportunity right here and now in a land called – for the moment – America.

My aim here in using the “assumption of America” term is to encourage the identification and consideration of two things:

This assumption of America has been not-so-surprisingly programmed into U.S. citizens through government-controlled “schools” more and more thoroughly and vigorously for many generations now. U.S. government controlled systems of “education” and corporate controlled systems of pop-culture have all, in harmony and not at all coincidentally, openly conspired to instill and engrain the notion of America (the United States government) as a unique, enduring, and necessary force for good in the world. Concepts such as truth, justice, freedom, and liberty have been systematically conflated with America itself and then redefined through State- and Corporate-controlled systems into tools used to strengthen and perpetuate the myth of the modern American Corporate State’s necessity and immortality.

This All-American State-as-god concept is now near-fully out of the closet, groping, trampling and destroying a culture handed over by professing Christians who are far more swayed by patriotic slogans, colors, songs and traditions than they are loyal to the Nature of God as revealed in His Word.

The absolute present-day necessity of Christ’s lordship in every realm of His creation – including right here and now in the political and governmental realms of ‘Merica – is something that we have now been blessed with a unique opportunity to proclaim and apply.

To that end, I’d like to submit for your consideration the concept of post-America Christianity.

I would like to encourage every true, supernaturally saved New Creature in Christ to grab hold of the biblical truth that America (the United States government) is not necessary for any good thing on this earth or anywhere else.

That sounds wrong to most American ears. It sounds unpatriotic. It even sounds evil.

Because our minds and hearts have been conditioned from birth to place America above all things, including criticism, (biblical or otherwise).

This is the systematically imposed, encouraged and ultimately embraced idolatry that has led us to where we are now.

If we take an honest look at both our present condition and well-documented path over at least the past 150 years, we should have little trouble noticing that the American Super State we’ve been groomed and programmed to unconditionally worship and obey is now blossoming into what it was always going to be.

What we – what any “Christian people” – should have known from the start is that any people who exalt the State above God are doomed. And yeah, that includes America and Americans.

We don’t get a special pass.

We’re not “exceptional” that way.

Nobody ever will be.

And, get this: That’s a good thing.

We as Christians, of all people, shouldn’t want it any other way.

Christ is King right now. Everything in His creation is defined by His Nature as revealed in His Word. That binding reality is unbreakable for everyone, every family, every town, every business, every nation, and every culture in His creation.

Can I get an amen?

It is in tis context – the context of true objective binding reality as defined by Christ – that I want to encourage each of us to settle the proper role of and need for the United States government – or any other man-made thing.

Where is our allegiance?

To Whom (or what) are we truly committed where the rubber meets the road right here and now in our lives, homes, businesses, and governments?

These are the questions I hope to explore in more detail later this week, Lord and schedule permitting.

In the meantime, please be encouraged to kick around the thought of post-America Christianity.

It’s really not such a bad thing. Quite the opposite, actually. And I suspect that it is much closer to reality than most American Christians would like to – or have been encouraged to – believe.

(Part 2 – Roaring into Post-America Christianity can be found by clicking here.)