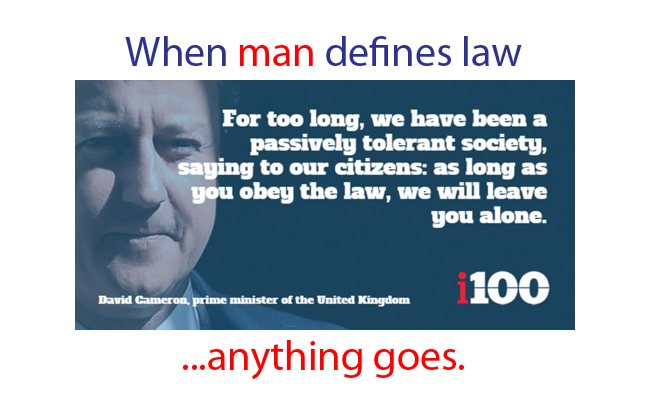 The UK Independent recently posted an interesting little article smartly titled, This is the creepiest thing David Cameron has ever said. Therein we are treated to the following gem of quote attributed to conservative British Prime Minister Cameron:

“For too long, we have been a passively tolerant society, saying to our citizens: as long as you obey the law, we will leave you alone. It’s often meant we have stood neutral between different values. And that’s helped foster a narrative of extremism and grievance. This Government will conclusively turn the page on this failed approach.”

How ’bout that, huh?

Lookie at where “good conservative Christian” leaders want to take us. (See also: US raises terror threat level to “Orwellian”. Citizens line up to hand over more freedoms.)

Hrmmm…I don’t know about you, but I find this perspective of Cameron’s to be, um, just a tad disconcerting.

It’s not just those domestic extremists and crazy “conspiracy theory” kooks who took serious issue with UK Prime Minister David Cameron’s recent overtly fascist language when it comes to freedom of expression in Great Britain. For example, in a post published today, the UK Independent describes the quote as “the creepiest thing David Cameron has ever said.”

. . . This statement, and others like it, are a huge deal. This isn’t how the leader of a major civilized Western so-called “democracy” speaks to the citizenry. It is how a master talks to his slaves. How a ruler addresses his subjects.

Also remember: This is always where “law” and “law-makers” will lead when they refuse to submit their everything to Christ as King in practice.

The question is: By what standard?

By what standard do we define law, economics, the family, the church, and civil government? (See also: Enemy of the Statist: Christ-Centered Liberty vs. Man-Centered Tyranny.)

The answer to that question always has and always will determine the direction of our lives, culture and civilization.

Is law and civil government here on earth something that man has been given free reign to “wing it” with as he sees fit? Or is it defined – in detail – by God’s Nature as lovingly, perfectly, and sufficiently revealed in His Word?

That’s the inescapable question. That’s the unavoidable fork in the road.

One path leads to Christ as King in practice. (See also: We the People…are not God.)

The other leads to the State as god in practice. (See also: Problem>Reaction>Solution – Why we will beg to have our freedoms taken away and go to war forever.)

Choose this day whom (or Whom) you will serve….and how your children and grandchildren will live…