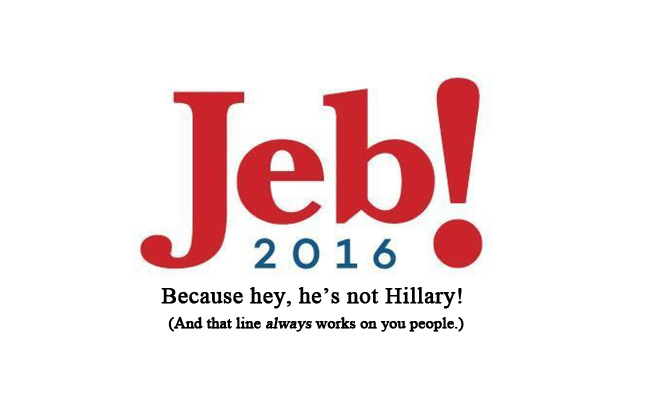 For those still enslaved to the Pagan Right/”Anybody but [insert name of Pagan Left candidate here]” political puppet show paradigm under which we are being led ever-deeper into Statism by our favorite “conservative” “Christian” “leaders”, a Big Gun from the Pagan Right side of the puppet show stage is about to make it official.

As AP reports, Jeb! is about to launch his campaign to become the Republican Party’s nominee for President by focusing on how his brand of “conservatism” “takes care of the most vulnerable” (read that as “is overtly Marxist, but that’s okay because he’s a “conservative Republican“).

Strangely enough, Jeb!  has also opted for a campaign logo that conveniently omits his apparently way-too-familiar family name. Normally things like high name recognition is golden and much coveted asset in the world of marketing, but not so much when your name is Hitler, Dahmer or, apparently, Bush.

Jeb Bush is ready to launch a Republican presidential bid months in the making Monday by asserting his commitment to the “most vulnerable in our society,” an approach targeting the broader American electorate even as he faces questions about his policies from conservatives in his own party.

The article then goes on to give us, in Jeb! ‘s own words, the core of the core of Jeb! ‘s beliefs:

“My core beliefs start with the premise that the most vulnerable in our society should be in the front of the line and not the back,” Bush says in a video featuring women, minorities and a disabled child to be aired at the event before his Monday afternoon announcement speech.

The “front of the line” for what?!

Well, for Jeb! /”Conservative” Republican Statism, that’s what. Here’s a sample of what Pagan Right wing conservatism has done, is doing, and plans to continue doing to all of us, including “the most vulnerable”:

So yeah, here in ‘Merica, the Jeb!  campaign actually has a real shot. That’s how far we’ve fallen. That’s the kind of “viable presidential candidate” we apparently deserve as  a part of God’s judgment upon us. (See also: How Jeb Bush despises privacy and freedom for the masses…yet will still get millions of “conservative Christian” votes (and campaign contributions).)

But hey, at least he’s not Hillary! Or Obama! Right?

Um, yes and no, actually.

He’s not named Hillary or Barack, sure, and he technically does fly the flag of the Republican instead of the Democrat Party. Other than that, and a few relatively unremarkable deviations, Jeb!  is exactly the same as Bill Clinton, Brother Bush, Father Bush, Mitt Romney, John McCain, Hillary Clinton and every other manufactured puppet operating on the Big Stage that is the controlled, contrived American Political Puppet Theater. (See: How to Kill the Two-Headed Dragon (Before it Finishes Killing Us).)

Jeb!  is just another head on Hydra.

Jeb!  is just another Statist on the Pagan Right team.