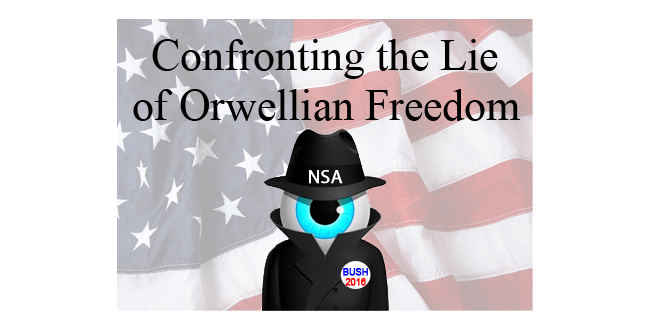 There are roughly 2.4 gajillion good reasons to not vote for Jeb (or any other) Bush to “lead” us (or anyone else that we care about), but one of the best has to be his open, flagrant, bone-chillingly creepy adoration of the emerging Orwellian State in America.

The man simply despises in practice the core values that most of his thoroughly (and dangerously) confused supporters claim to hold dear. However low-key, well groomed and polite he may be on the personal presentation side, make no mistake: Jeb Bush is a stark raving Statist…just like his bro ‘W’, daddy George, and granddaddy Prescott.

“I would say the best part of the Obama administration would be his continuance of the protections of the homeland using the big metadata programs,” Bush said in an interview on the Michael Medved radio show.

The former Florida governor said the NSA’s bulk collection of Americans’ phone data was “an important service” carried out in a way that protects individual civil liberties.

He lauded the Obama administration for refusing to buckle under pressure from Democrats, civil liberties groups and some Republicans.

“He has not abandoned them,” Bush said.

Critics of the NSA programs say they’re a massive affront to individual privacy, while defenders say they’re a critical tool in uncovering and combating terrorism.

Back in March, The Hill informed us that Bush is “nervous” about criticisms of the NSA:

“I’ve always been nervous about the attacks on the NSA, and somehow that we’re losing our freedoms by keeping the homeland safe,” Bush told conservative host Hugh Hewitt.

“I think we need to be really vigilant about that.”

Bush has been a staunch defender of the NSA, which grew in stature during his brother’s administration in the years after the Sept. 11, 2001, attacks.

And the month before that, in February, The same Hill informed us that, as controversy was building once again over the Orwellian NSA in America, Bush was coming down squarely on the side of…the NSA. Why? Well, to “keep us safe”: of course:

“This is a hugely important program to use these technologies to keep us safe,” Bush said.

In classic Orwellian Nazi/Gestapo/Stasi/KGB style, Jeb Bush believes that in order to keep us properly safe, we must be thoroughly monitored and controlled. (See: So the American State has to destroy our freedom in order to protect it? Oh yeah, that makes sense.)

Truth be known, the level at which the American State now spies upon its “free” citizens is so comprehensive and so advanced that past heads of the Gestapo and KGB would weep with jealousy. They were pikers compared to the NSA. (See: So even the Germans are creeped out by our Surveillance State.)

Of course, the ways in which Bush thinks that the American masses should be monitored and controlled obviously don’t apply to him or his fellow freedom- and liberty-pillaging pals atop the Almighty State. (See: Privacy is for masters. Transparency is for slaves. Welcome to “the land of the free” and the home of the NSA.)

With every new fictional, real, contrived or imagined threat made by anyone anywhere against the “Land of the Free” and the Home of the NSA, our cowering, controlled citizenry is told (and dutifully obeys the command) to surrender even more freedom and liberty to our god in practice, the American State. (See: U.S. raises terror threat to “Orwellian”. Citizens line up to hand over more freedoms.) And with every new “threat” (ever-so-often fueled and funded by the American Statists themselves), we are successfully nudged further and further down the pathway of perpetual war, perpetual welfare, and perpetual slavery…all by design. (See: Problem>Reaction>Solution – Why we will beg to have our freedoms taken away and go to war forever.)

Which brings us neatly back to the Bush family – American conservatives’ favorite advocates of the never-ending, ever-expanding Welfare/Warfare State.

There can be little doubt that our present slavery to the “lesser of two secular evils” mentality that gives us over again and again and again to the likes of the Bushes, Clintons, Romneys, McCains, and Obamas  of the world to “lead” us to ruin is, itself, one of the clearest signs of God’s judgment upon us as a culture and as a people.

The Bushes, Romneys and McCains are but masks worn by the Right head of the two-headed progressive dragon each four years. The Clintons and Obamas are only masks worn by the Left head. These are two heads of the same dragon, and until we stop feeding that dragon by playing into its contrived, controlled political puppet show, we will not even begin to effectively oppose, much less slay, this beast that is striving mightily to secure our doom. (See: How to Kill the Two-Headed Dragon (Before It Finishes Killing Us).)

May God grace the people of this land with the widespread brokenness and repentance necessary to avoid a Jeb Bush (or any other secularist/Statist) presidency. May God grace us with submission to Christ as King in practice.