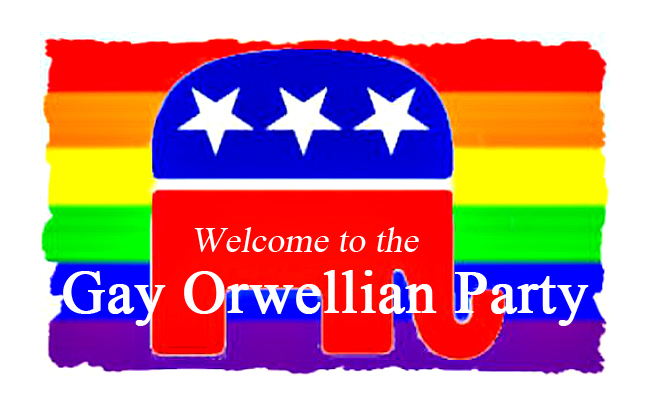 Since there are still so many professing Christians in America who are entranced and enthralled by the Pagan Left/Pagan Right political puppet show that has dominated the scene here in ‘Merica for generations now (I was once way into this camp myself), it’s always a good idea to point out how the top tier “conservative leaders” being pitched as our “best chance” to “save the country” from “those evil Democrats” is, in fact, no less likely to ultimately lead us into the Orwellian hell of anti-Christian Statism than any Democrat, Marxist, Communist or “gay rights” activist. (See: The America Idol: How “Christians” Worship and Enable the Anti-Christ State.)

The Pagan Political Left and Pagan Political Right are two wings on the same anti-Christian dragon. (See: How to Kill the Two-Headed Dragon (Before it Finishes Killing Us).)

The sooner we get that, the better. In the meantime, for as long as The Pagan American Political Puppet Show is a favorite here in the “land of the free” and the home of the NSA, we have a duty to shed some (often unwanted and even hated) light on the Pagan idols holding sway over the political thoughts, actions, and resources of so many professing Christians in the land. (See: Confronting the Gay Orwellian Party: Dragging the Pagan Right out of the closet and into the light.)

Along those lines, today we come once again to the latest Bush to take a swing at the presidency. We’ve covered Jeb a few times already in recent months. See: Jeb Bush makes the Pagan Right pitch on religion (again)., Jeb! (not Bush) Launches Presidential Campaign with “Conservative” Case for the Welfare/Warfare Nanny State, and How Jeb Bush despises privacy and freedom for the masses…yet will still get millions of “conservative Christian” votes (and campaign contributions).

The reason for this particular go-’round is that, as Newsmax reported recently, Jeb recently came out as being “fine” with the open integration of “transgender” soldiers into the U.S. military.

Not exactly “a stunner”, am I right?

Much closer to par for the course where American “conservatives” are concerned these days, actually.

That’s just what naturally happens when your “conservatism” trumps (and is therefore severed from) Christ.

Like freedom, liberty, law and justice, conservatism also begins to die and becomes and instrument of death once it is severed from explicit submission and reliance upon the Nature of God as revealed in His Word.

The leader of a leading organization representing gay, lesbian and transgender military service members says he’s “cautiously optimistic” about comments made by Jeb Bush regarding transgender people serving in uniform.

Campaigning in Iowa on Wednesday, the former Florida governor was asked by a reporter whether he would support allowing transgender people to serve in the military.

“I’m sure there’s a role for everybody to play in the armed forces. I think it would depend on the specific role and whether it’s appropriate enough,” he said. “The first priority for the military is to create an environment where the morale is high, where people are trained and we have the best fighting force. And if you can accommodate that in that kind of environment, I don’t think there’s a problem for it.”

Isn’t it interesting that the crystal clear will of God as lovingly revealed in His perfect Word is never – I mean never – even presented as a point for serious consideration by these Pagan Right “conservative leaders”?

Well, that answer is as obvious as it is ignored by the masses of professing Christians who just want to go on pretending that their preferred Pagans will some how, some way, find a way to make this whole Pagan American political thing work.

The obvious answer to the glaring question as to why the Word of God is not even included in the conversation on this or any other issue in any meaningful, substantial way, is that the Pagan Right political “leaders” doing the leading of these conversations actually and actively hate the Nature, Word, and Lordship of Christ.

They will not have Him to rule over them. And they will lead “We the People” in the same direction at every opportunity, encouraging us to believe that we have the power within ourselves to define our own reality and determine our own future, all by our will, through our determination, and for our glory.

It’s as simple as that.

This is not a tricky thing to figure out, folks.