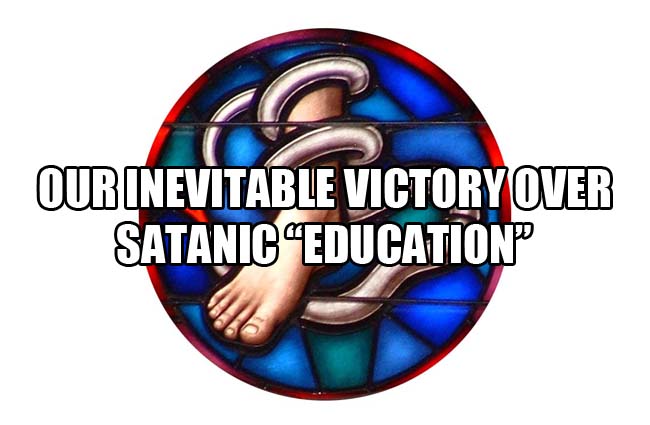 These days in America, it’s often professing Christians who seem to least believe that Christ the King actually owns and defines all of reality (see: Colossians 1:16).

After generations of immersion in a man-centered, emotion-driven, and culturally disengaged religious worldview masquerading as Christianity, we’ve largely come to expect the victory of Christ’s enemies all around us here on His earth. Worse still, many of have even been programmed to cheer the advance of evil in the land since, according to recently constructed and wildly popular “end times” views, the faster and further things here can plunge into darkness, the sooner Jesus will come to whisk away all of us whining, lazy, culturally disengaged Christians via “the rapture”.

Needless to say, this gleeful, selfish approach to self-serving prophecy and pre-emptive cultural surrender has been a great and much appreciated aid to the enemies of Christ. The apathetic, lazy American “church” and it’s compliant concession to the “inevitable” success of the forces of darkness has rendered it disinterested in and disconnected from the Gospel-fueled Great Commission that Christ gave His true Church so that He might, by His grace through His people, make obedient disciples of all nations and bring every thought captive to Himself. (See: Matthew 28:18-20 and 2 Corinthians 10:5.)

So it is that most professing Christians in America have become quite comfortable sitting back and moaning about the terrible things that are happening all around them…while doing precious little to actively engage and defeat the enemies of Christ in accordance with His Gospel-fueled Great Commission.

Needless to say, this is a bad formula. (See: The Little gospel That Can’t.)

For Christianity and culture, anyway.

But for the life, health, peace and prosperity of people, culture, and civilization?

The self-fulfilling bad prophecy of “inevitable” victories of Christ’s enemies in His creation is something that we must confront and correct as we strive to do what He has commanded and equipped us to do right here and now in the middle of the smoldering slagheap that is American culture.

To that end, I’d like to share a few thoughts from a recent article on the subject of…get this…the inevitable failure of State-controlled children’s “education” right here in the land we now call America. The article, Public Schools – Game Over, is loaded with just the sort of optimism that should naturally flow from a Christian worldview:

“Public education is losing ground. It is being undermined at every turn. This is due to more than the Christian contingent. People everywhere are taking control of their children’s education. The Internet is making this possible. As time marches on, tools and information will be even more accessible. This trend will not be reversed.

Why not? Funding. The system takes gobs of money. Gobs. It inhales taxpayer money and then wastes it like any other bureaucratic welfare-state system does.

Resources flee over time from those individuals and institutions that misallocate capital. Competition eats them alive. Resources also flee over time from individuals and institutions that break God’s law. By giving the state jurisdiction over the education of our children, this is exactly what we have done over the last 300 years. We have already paid for that choice. We have more to pay. In the meantime, the institution is coming to an end.

. . . It is game over for the current public school system. The exodus has begun. Nothing will stop it.” (emphasis added)

Not that many years from now, Christian children and parents who are thriving in the land we now know as America will look back at all of the excuses, whining, and pathetic, selfish laziness of previous generations who surrendered their children to the State in direct violation to the Word of God and they will wonder many things. Lord willing, they will seize that opportunity to notice and adore, among other things, the grace of God through the obedient few that He preserved in this present time of rampant laziness, apathy, and unbelief.

May God grace His people here and now with repentance, reformation and a reborn zeal for His Gospel-fueled Great Commission. (See: The devil only holds what we leave in his hands.)

It is a paper tiger.

It is a phony lion.

It is a fiction.

It is a fraud.

It is a lie built upon nothing but lies. (See: Government run “education”…and why we don’t know anything anymore.)

It’s time for Christians to repent, believe, and make obedient disciples of all nations, beginning with their own Children, in precisely the manner that He has lovingly prescribed.