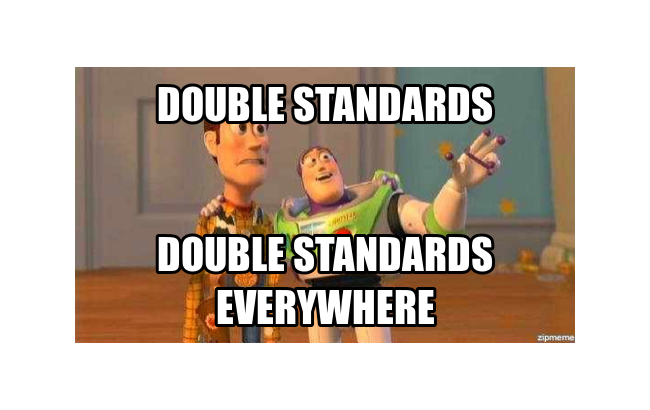 There can be little doubt that if a Duggar came out as a homosexual who’d acted out sexually in their mid-teen years, they’d be the most celebrated, adored and defended creature in the modern mainstream media universe.

That much should be obvious at this point, whatever one’s perspective might be on the many tragic aspects of the presently unfolding Duggar family drama centering on Josh, the eldest child of Michelle and Jim Bob Duggar.

There’s a lot that we know and a lot that we don’t know about the details of this story and situation. As I’m still trying to find and process necessary (as opposed to gossipy) details myself, this article is not aimed at some sort of detailed or semi-detailed analysis of this very sad story. Lord willing, I may be able to post something along those lines in the future.

The point of this article is to focus instead on a rather stunning display of selective, inconsistent outrage that is swirling about at this moment and being purposefully used to further particular agendas. That said, even if this purposeful manipulation of people through the selective and wildly inconsistent application of emotion-driven outrage is real (and I believe that it is), that terrible abuse of this tragedy for the sake of advancing certain agendas in no way excuses the sin and abuse that has actually occurred in the first place. The sin that has come to light is egregious. It is real. The fact that we can (and should) see how the Duggar family drama is being used to move the culture should in no way be taken as a “defense of the Duggars” in some blind, blanket manner. It is not.

I hope that much is clear before getting into the actual point of this post. Please pray for the Duggar family and all of those who have been impacted – directly and now indirectly – by the sins at the heart of this story. Please pray that the Lord will bring brokenness, repentance, grace, forgiveness, peace, strength and joy to and through all of those involved, in whatever measure He knows them to be necessary. Here are some of the many passages that the Lord has graciously provided for the comfort of His people in times such as these:

If we confess our sins, he is faithful and just to forgive us our sins and to cleanse us from all unrighteousness. ~ 1 John 1:9

And we know that for those who love God all things work together for good, for those who are called according to his purpose. ~ Romans 8:28 (emphasis added)

For I am sure that neither death nor life, nor angels nor rulers, nor things present nor things to come, nor powers, nor height nor depth, nor anything else in all creation, will be able to separate us from the love of God in Christ Jesus our Lord. ~ Romans 8:38-39

He who dwells in the shelter of the Most High
will abide in the shadow of the Almighty.
I will say to the LORD, “My refuge and my fortress,
my God, in whom I trust.” ~ Psalm 91:1-2

I hope and pray that all of those involved will find true peace in this trying time as they are drawn ever-closer to the Author of these passages.

Now, on to the primary point of the post…

If a Duggar came out as a homosexual who’d acted out in their mid-teen years, they’d be celebrated.

If someone in a family like the Duggars “came out” in their twenties as a homosexual and, as a part of their undoubtedly internationally promoted story of triumph and bravery, admitted to having acted out sexually in their mid-teens with several others, is there any real doubt as to how this story would be presented by the vast majority of mainstream media “news” vendors?

Is there any doubt as to how such a story would be used to alter the perceptions and inclinations of the masses to whom it was sold? (See also: Get with the Big Gay Program…or suffer the economic consequences.)

Is there any doubt, really?

If Barack Obama qualified for a Nobel Peace Prize just for being elected President, then the champion of inclusion and diversity at the center of this story would surely deserve (and maybe even get) two!

If the Duggars should have their show cancelled in light of the recent controversy, as many claim, how many of those same folks would be all about the person at the center of this hypothetical getting their own television show as a result of their “coming out” story? How many networks would be chasing after the possibility? How many publishers would be lining up to print his or her (or its; you never know in the era of gender chaos) story? (See: Gender Chaos: The Insanity (and Impossibility) of “Sex Change”)

How different would the treatment be?

Completely. (See also: Please pray for the Duggars. This world REALLY hates them.)

The focus would not be on the sin of homosexual behavior. That sin would not even be acknowledged as sin. It would be celebrated as a virtue; as a gift from God.

The focus would not be on the sin of inappropriate sexual contact back in those mid-teen years. That would be portrayed as understandable and normal.

The focus would be on the bravery, leadership, conviction and general awesomeness of the now twenty-something homosexual in question.

May God grace His people with the desire and opportunity to love this culture and its people truly and self-sacrificially enough to lovingly confront and correct it with the Gospel-fueled Great Commission of Jesus Christ.