What does pride, freedom, and liberty look like when severed from the law and nature of God their basis?

We are increasingly able to provide a one-word answer to that ugly question, and that answer is: America.

As reported earlier today, the Supreme Court of the United States has turned away appeals Monday from five states seeking to prohibit same-sex marriages, paving the way for an immediate expansion of gay and lesbian unions.

This is just the latest in an ongoing wave of civilization shaking developments to sweep over our culture. But make no mistake: this big, gaudy, gay flower is blooming from a tree planted in this land long ago…dating back to the days of the founding of our Republic.

When we decided that freedom, liberty, and law was not to center on the nature of God as revealed in His Word, we set ourselves up for this…and the much worse to come.

When we made the opinions and feelings of man our gold standard in law and life, we were finished. 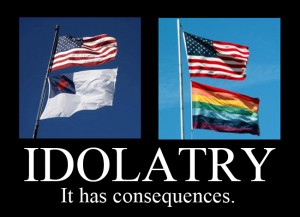 Until and unless we repent of our rebellion and actively strive, by God’s grace, to conform to His life-defining, life-sustaining nature as revealed so lovingly in the pages of Scripture, we are, and should be, doomed.

This is the unfolding lesson of all of His creation: It is impossible to truly supplant His rule in any realm. We cannot truly break His laws; we can only succeed in breaking ourselves upon them.

This is becoming the tragic lesson of America.

And this is the vital, incontrovertible truth that all of the world’s distractions would prevent us from even noticing, much less taking seriously. This is the truth that His people must faithfully proclaim and apply at every opportunity.

This world of ours as we have imagined it for so long is changing radically before our eyes. The rate of that change is only likely to increase as the cumulative burden of proud multigenerational rebellion finally takes its toll and brings forth its inevitable fruit. Whether the direction of that change continues into deepening darkness or reverses course and begins moving toward the light of Christ will be determined by God’s grace as manifested through His people.

Will we faithfully proclaim truth, however unpopular, and diligently challenge idols, however cherished?

Or will we do as we have done for so long and continue to lead this land and its people to ruin?

None of this is the Democrats’ fault. Nor the liberals’. Nor the progressives’. Nor the homosexual activists’.

The first line of responsibility belongs to the people of God.

As such, the “marching orders”, advice, and “solutions” offered by Fox News, Rush Limbaugh, and the Republican Party are incapable of actually leading us from darkness to light. The Christ-dismissing conservative approach is as sure to lead to death as is the Christ-dismissing liberal perspective, albeit by perhaps a prettier and more enjoyable route (which arguably makes it more dangerous as it is more tempting to many).

Until and unless we surrender our pride and openly submit without any pretense or qualifications to the crystal clear standards of God’s nature as revealed in His Word for the basis of our law, economics, education, and everything else, we are done.

And remember: The Fox News/Rush Limbaugh/secular “conservative” crowd is every bit as opposed to that solution as is Barack Obama, MSNBC, and Hillary Clinton.

Please let that sink in and act accordingly, Christian.

Stop being a tool of the enemy.

Start being a soldier for the King. 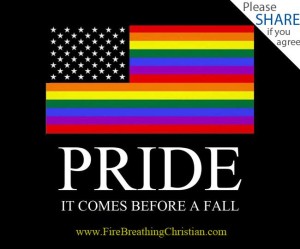 Lord willing, His people will read these “signs of the times” in light of His revealed will and stop playing the distracting little political, pop-culture games of the enemy, while there is still time to make a difference. Lord willing, we will stop worshipping the idol of America so that America might be called to repent and be saved rather than be crushed under the righteous wrath of the holy God she has openly mocked for so very long.

May God grace His Church with the desire, opportunity, and ability to faithfully proclaim the whole, undiluted Gospel of Christ so that the Great Commission mandate might be fulfilled and even our rotten, dying culture might be supernaturally saved…one individually repentant sinner at a time.