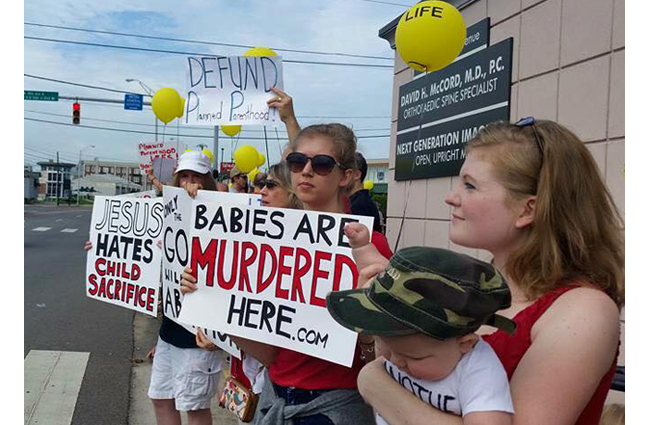 My family was blessed to join over thirty other folks from Christ the King Church in today’s Nashville contribution to the nationwide protest of Planned Parenthood. The overall size of the crowd at our location has been reported in in the 500-600 range (which was reported by local “news professionals” as “dozens and dozens” rather than “hundreds and hundreds”, of course).

There’s much to share about what’s happened leading up to this point, what happened today, and what we ought to strive with all our might to see happen in the future in light of the great opportunity that we’ve been given. While we’ve covered the All-American “legal” child sacrifice concept in detail in the past and plan to do much more along those lines in the future, including diving into what exactly we should be doing with our time, talent and treasure to most effectively fight on this particular front of the culture war (hint: The Gospel), in the meantime I thought it might be helpful and encouraging to share some initial thoughts on the good, the bad, the ugly, and the ridiculous from today’s event.

Many who were involved in today’s protest have been moved to participate and stand in this way for the first time. This is a very good thing (despite what some may say…and we’ll get more into that momentarily).

Is there a danger here of wasteful activism in the sense that we might believe that we are accomplishing far more through this particular act than we actually are?

Is there great potential for confusing the picketing of the gates of hell today with the storming of those gates and the effective razing of the demonic system on the other side of those gates?

Is there great risk of then encouraging over-reliance on minimally or less effective means of opposition by holding today’s event too highly as a great example or victory?

Even so, the fact of many more people being moved to action of some sort is an inherently good thing. The accompanying fact that we need to better focus the attention and efforts of these new (or sporadic) activists in no way mutes the real value of their coming out in such numbers today.

The opportunity to connect and fellowship with like-minded Christians is not something to be taken lightly. That said, opportunities great and small can be seized and they can be lost, so the fact of the opportunity doesn’t guarantee us anything but an accounting to Christ for how we use and build upon it.

Another very good point was the opportunity to include very specific, very Christ- and Gospel-centered proclamation on signs and in conversations that permeated the environment. While there had been some noise about event organizers taking a blasphemous “don’t pray in Jesus’ name as not to offend anyone” tact, this event was, from the get-go, opened in beautiful God-honoring prayer that didn’t wait to the end to merely close “in Jesus’ name”. This prayer began there; it began with Him and remained clinging to Him all the way through. This same sentiment was clearly held dear and demonstrated by many in attendance.

Soli Deo gloira and woohoo to that, am I right?!

Even the Abolish Human Abortion folks should be able to amen that.

Which brings us to…The Bad:

Not surprisingly, even Bible Belt-based Corporate/State-managed media coverage was often ludicrously incompetent and deceptive. There was one roving reporterette who was wandering down the line of protesters, having her camera guy film her asking basically the same basic battery of questions followed by the same basic battery of follow-ups to each Planned Parenthood protester. I won’t subject you to the whole spiel here, but one example should help to give you a feel for the approach to “professionalism” deployed here at the gates of hell in Nashville:

When a protester would make their initial criticism of Planned Parenthood’s systematic mass murder and dismemberment of little baby boys and girls for profit, the reporterette in question would then immediately and mindlessly regurgitate a version of the mind-blowingly inane and offensively stupid “What about the many other ‘health services’ provided through Planned Parenthood? Aren’t those good things?” line.

Which is a lot like saying, “But Hitler built the Autobahn!”

Isn’t the Autobahn a good thing?

Isn’t driving on a nice, solid highway a good thing?

Isn’t that good for humanity? Don’t you like the idea of a highway on which ambulances and Lamborghinis can safely cruise at 120 miles an hour when the mood hit’s em?

So was Hitler really such a bad guy?

See how idiotic that is?

See how satanically dumb it is and how “given over” a la Romans 1 we and our beloved, trusted “professionals” have become?

When the mass murder and dismemberment of our own little baby boys and girls by the millions, freely and openly sacrificed over decades here in “the land of the free and the home of the brave” all in the name of “liberty” on the twin altars of convenience and profit is suggested to be even partially offset in any noteworthy way by any other “nice” thing that the demons doing the sacrificing might sprinkle around the edges, you know that our State/Corporate owned and controlled media is thoroughly wedged deep in Satan’s pocket…or in some other nearby place.

Which leads us neatly to The Ugly:

This whole situation is drenched in ugliness. We were all literally standing within feet of a facility – one of hundreds – that is “legally” protected by the United States government and thereby empowered to openly, systematically murder and dismember millions of baby boys and girls. (See: Selling murdered baby parts in America? Sure. Why not?)

That’s the surreal reality with which we must contend. That’s the present situation that we as the church must effectively address…which will require infinitely more than picketing the gates of hell on one particular Saturday.

By leading a watching world and culture away from Christ’s Word as our binding standard in law, education, economics and everything else, it is the professing Christian church that is most responsible for all of this ugliness. (See: Presuppositional Law: Where we begin with law determines where we end.)

We are responsible for the unfolding gender-undefinition insanity. (See: How has “Christianity” paved the way for gender chaos insanity?)

In sending our children to the State for explicitly Statist/Pagan “education”, when God has made plain that do so is sinful and destructive, we are most responsible for each wave of State-“educated” so-called-“Christians” being more openly Pagan and Statist than the last. (See: Why is the beast of Socialism eating our children? Ask your pastor. and Redeeming Children’s Education: Confronting Our Satanic Approach to the Pursuit of Knowledge.)

We are responsible for allowing, enabling, and now even adoring the conflation of America with God that has produced the beast of systems that now stands ready to devour us and even our unborn children. (See: The America Idol: How “Christians” Worship and Enable the Anti-Christ State.)

We have led the culture by example in each of these ways.

So it is that we must, by the grace of God, lead the way back to sanity and life through repentance and submission to Christ as King in practice.

Nothing else will ever work.

Nothing else will ever do.

The Republican Party, Fox News, and every other tool of the Pagan Political Right will never do what needs to be done. Worse still, and in direct contradiction to all of their wildly popular “pro-life” propaganda, they will act to assure that these great evils persist, as they have done from the beginning, all while pretending and continuing to play professing Christian “conservative” political activists like cheap, disposable violins. (See: How’s that Pagan “conservatism” workin’ out for ya, Christian?)

Only the Gospel will eradicate child sacrifice. (See: Jesus Conquers Everything.)

Only the Gospel-fueled Great Commission will save this land…one individual supernatural salvation and grace-fueled act of obedience at a time. (See: The Awesome Gospel.)

This Christ- and Gospel-centeredness is what we have to hold dear and hold high.

And I was very encouraged to see and be with so many who seemed to understand that today.

Of course, there were many who did not understand this, and many who will as a result fall into the traps mentioned at the beginning.

Lord willing, we who are His will be moved by His Spirit to fight faithfully with everything we’ve been given so that we might seize this and every moment for the advance of His Kingdom, all by His grace, all to His glory, and all to our children’s and unborn children’s eternal benefit.

There is much more to report and ponder along these lines soon, but I wanted to share this report with you now. I hope and pray that my clumsy, weak effort will be used mightily by our gracious, loving Lord to inspire and encourage every one of the beloved Brothers and Sisters purposefully placed with me here on this battlefield at this time to fight the good fight, tear down enemy strongholds, and one day batter down the very gates of hell.