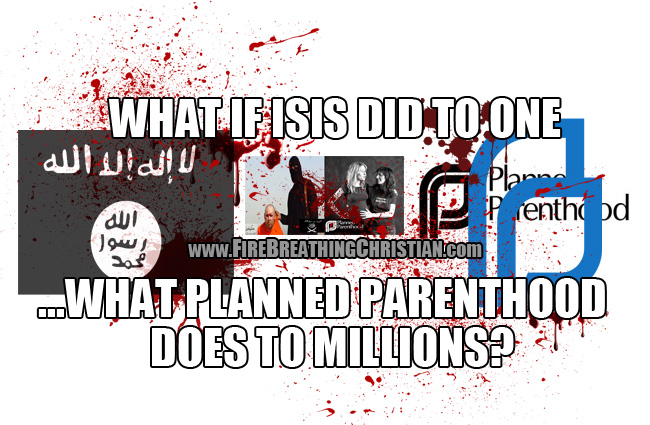 What if ISIS released a video of one of its agents calmly, coolly, and clinically murdering and dismembering an American baby?

What if ISIS did to one single solitary American baby boy or girl what Planned Parenthood is “legally” empowered by America to do to American babies here in “the land of the free” and the home of “the brave” on a routine basis? (See: Selling murdered baby parts in America? Sure. Why not?)

What if just one American baby was unapologetically butchered and pulled to pieces by an ISIS agent on video that way?

I think we all know by experience at this point just how that video would be be used to move the emotions and mobilize the masses in a manner and direction supportive of our beloved American State and its Corporate masters.

Such a video would be seized upon instantly as a great and powerful tool of manipulation.

Within minutes of its release, it would be in the heavy broadcast and “analysis” rotation on Fox News, CNN, and every other mass media mouthpiece at the disposal of our Pagan Corporate American System of systems.

Within a week, we’d be begging for (another) war (or two or three).

We’d be begging for bombing…lots of bombing!

We’d be begging for boots on the ground.

In short: We’d be wholly owned and purposefully directed by our Corporate/State-encouraged bloodlust.

We’d be encouraged by our Pagan political elites to lunge at the opportunity to go to war and kill “those barbarians”  for what they had done to one American baby and what they might well do again.

No expense would be spared.

No excuse would be accepted.

If ISIS made one video chronicling one instance of the murder and dismemberment of one American baby boy or girl, that’s what would happen.

Now add this into the hypothetical:

Let’s suppose that ISIS killed one American baby and then pulled it to pieces on video, but then that the “horrible, monstrously evil” butchers in question dared to…*gasp*…sell the American baby body parts (!!!).

At this point, you’d have every Neo-conservative hack and tool, every Pagan “conservative” “leader” and “expert” literally foaming at the mouth while relentlessly bludgeoning anyone who would dare question the “clarion call” to (another) “necessary war against evil” in another far away land…or however many far away lands we’d have to invade to track down and kill the evil ISIS organization who had so vulgarly and disgustingly produced one video chronicling the murder and dismemberment of one American baby who was then parted out for cash.

All while Planned Parenthood continued to operate freely here all across the fruited plane, of course.

That’s what Pagan “conservatives” do, of course.

And they lead us to do the same.

They lead us to “outrage” when it suits their true goals and objectives, which always center on preserving and expanding the power of the Almighty American State. (See: How’s that Pagan “conservatism” workin’ out for ya, Christian?)

This is why they never seem to get around to ending child sacrifice in America.

The “right” of Americans to murder American babies for convenience and profit serves them well.

The “right” of Americans to openly worship false gods, so long those equally lesser gods each submit in practice to the one true god of the American State, also serves them well.

This is why Planned Parenthood can do to millions of American babies what ISIS could never be allowed to do to one.

This is where civilization, culture, law, and justice end up when we presume that “We the People” are God in practice. (Please see also: Presuppositional Law: Where we begin with law determines where we end.)

My fellow Americans, we are the problem.

Our Godless, lawless approach to law, liberty, freedom, economics, education and life itself is our greatest threat.

Our “We the People” as God in practice worldview, as encouraged for generations now by the American Corporate/State, is

Our ongoing, unrepentant sin is killing us, and dramatically so.

Repentance and submission to Christ as King is our only hope; our only path to true life, true liberty, and the pursuit of true happiness.

No matter what your favorite Pagan “conservative” tells you.

Remember: These Pagan “conservatives” are the ones who want to send us off to war against the likes of ISIS as a matter of routine while Planned Parenthood just keeps right on doing its baby butchering thing on a scale and with an openness that makes Nazi Germany look like a happy land of pixies and unicorns.