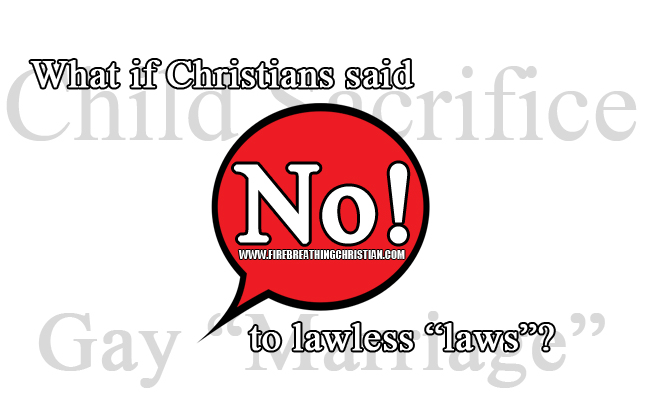 What if we had in just one or two of our United States of America and actual Christian State Governor, as in: Someone who demonstrates true love for the real Jesus by striving to actively obey Him in every area of life. You know, as if he actually lived out that whole “if we love Him we will keep His commandments” deal (see: 1 John 2:3) and took seriously the Great Commission mandate to become and create disciples – not mere professing converts – who demonstrate the same true love for Christ by striving to learn, obey, and apply all that He has commanded (see: Matthew 28:18-20).

In other words: A real Christian.

A true and loving disciple of the Lord.

What if we had one o’ those sitting in just one or two Governor’s mansions across the fruited plain.

What would they do?

How would they handle the “legal” decree from DC that “gay marriage” (pronounced “gay mirage”) is “legal”? How would they deal with the open, ongoing, systematic mass murder of baby boys and girls across the land in the name of “freedom”, “liberty” and the satanic “right” to murder one’s own child for convenience? (See: Note to ‘Merica: There is no “God-given right” to murder children. Repent accordingly.)

While we may never know based on the trajectory and rate of decline unfolding here in “the land of the free” and home of the self-described “brave”, God has given us first His Word on the subject – which is always enough – and now he has also given us Kim Davis.

God has given Kim Davis several things, including a job as County Clerk in Rowan County, Kentucky.

Through His providential placement and use of her now, He is also giving us many things.

Kim Davis will not condone or comply with lawless “laws” handed down from Washington DC when it comes to the profanation of marriage by way of making “gay marriage” “legal”. (See: “Supreme Court” Votes for Wrath of God Upon America.)

Kim Davis, in this instance, is demonstrating a fear of God rather than the fear of man that we have been conditioned to hold and base our lives upon here in the “land of the free” and self-described “brave”.

Therefore Kim Davis is now the subject of all manner of System-defending, Scripture-trampling criticism from all across the political spectrum.

While we may well explore and criticize these criticisms in future posts, for now, let me simply say: Thank God for Kim Davis!

Yes, she is a flawed, sinful person with incomplete understanding of truth, as we all are, but she is standing. She is putting herself on the line. She is doing what magistrates at any level in the God-ordained, God-defined institution of civil government are commanded by Him to do.

As such, we should all be praying and pulling for her now in any way possible.

Doug Wilson provided some much needed biblical perspective in a post at his blog yesterday:

A consensus appears to be developing among otherwise reasonable people that Kim Davis, of Rowan County fame, either needs to start issuing marriage licenses or quit her job.

But there is a difference between contempt of court and seeing that the courts have become contemptible.

Now while florists and bakers and photographers enjoy a great deal of active support from the broader Christian world, the most people like Davis will get is a sympathetic lack of sympathy. It falls out this way because Christians generally understand the private sector — that’s where they live, after all — but they don’t understand the nature of government. They don’t understand the public sector and the relationship of God’s  Word to it. Their theology develops a distinct limp as soon as they step into the public square, but it is not the kind of limp you might acquire by wrestling with God at Peniel. It is more like what might happen if you dropped the Collected Works of Immanuel Kant on your foot. That results in quite a distinctive limp, one  you see everywhere.

Dr. Joel McDurmon of The American Vision added valuable clarity yesterday as well when he wrote:

Kim Davis, the Rowan County, Kentucky clerk who refuses to sign marriage licenses for homosexuals, creates a case full of interesting dilemmas, but she is doing the right thing. I would like to focus on the most important angle, and one which is simply not getting much emphasis in the media. This is a perfect case to highlight the nature of true federalism, the role of the lesser magistrates, and the long road Christians have ahead of them in restoring America.

So what would an actual Christian State Governor do?

How would an actual Christian State Governor handle the issues of child sacrifice and “gay marriage”? (See also: With ObamaCare and “Gay Marriage” upheld, when (if ever) should we simply say no to Federal control?)

He would stand on the Word of God as the ultimate basis for everything in His creation…including civil government and law. (See: Presuppositional Law: Where we begin with law determines where we end.)

He would honor his Lord in practice.

He would honor His Lord in office.

He would demonstrate true love for Christ, true love and respect for his office, and true love for the people of his state by striving always to actively the perfect, loving Word of Jesus Christ.

In doing so, he would honor the office that the Lord has given Him and bring presently unimaginable blessings to the people he serves and leads.

That’s what an actual Christian State Governor would do.

Let’s pray that God gives us the desire for such a Governor…and then maybe, by His grace, the Governor, too.