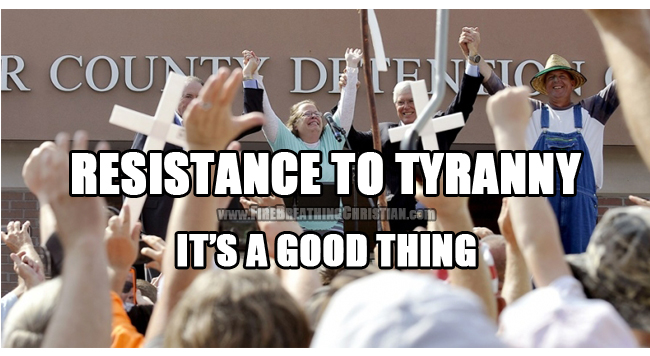 Thank God for the example she has been at this critical moment. (See: Woman jailed for obeying God in America…while Gay America chants “love wins!”)

Thank God for the thoughts and conversations that her biblical stand has ignited. (See: Do we actually believe that God’s Law is binding? Or do we not?)

Thank God for the clarity that she has provided…and the excuses that she has exposed. (See: 5 Reasons Why American “Christians” Cheer the Persecution of American Christians.)

Thank God for the conviction that she has inspired, and for the hopeful repentance and restoration that may soon come in its wake. (See: Will America repent or will America be destroyed?)

In a land rocketing into oblivion while loaded with professing Christians, including many who occupy roles in civil government described in Scripture as magistrate positions, all of which are subject to obey the will of the King of kings as revealed in His Word (see: Romans 13), God has been pleased at this time to raise up one of the least of lesser magistrates in the “land of the free” and home of the self-described “brave” – Rowan County Kentucky Clerk, Kim Davis.

Whether Mrs. Davis is actually a Christian is irrelevant to the core truth for which she has been persecuted: Her willingness to actively obey the commands and authority of God above those of man, as is required by God of all people. By refusing to comply with a lawless order and thus sin against God, Mrs. Davis interposed, selflessly placing herself between the lawless, wicked commands of men. In this she has sought, as she must, to prevent her people from sin by preventing her office from actively sinning on their behalf. This is what’s known as “a biblical view of civil government”…a view entirely abandoned by most professing Christians in America (which is why we have the increasingly hellish government that we do). (See: Presuppositional Law: Where we begin with law determines where we end.)

In this self-sacrificial obedience to God over man and demonstration of fear of God rather than fear of man, Kim Davis is modeling in a very real, very practical manner, what biblical salt and light actually looks like. You know, what actual Christians are supposed to actually be and actually do:

You are the light of the world. A city set on a hill cannot be hidden. Nor do people light a lamp and put it under a basket, but on a stand, and it gives light to all in the house. In the same way, let your light shine before others, so that they may see your good works and give glory to your Father who is in heaven.”

And man, are we ever being trampled underfoot by civil government.

If Kim Davis is actually an unbeliever, as many reports seem to indicate (I do not personally know Mrs. Davis and have not looked deeply into her worldview), the tragic and convicting irony of her actually modelling biblical salt and light far more faithfully than the gajillions of professing Christians who are regarded as “real Christians” by the same folks impugning Davis for her stand because she “isn’t really a Christian” is itself a powerful indictment of our proud people and dead religion through God’s use of this woman in this moment.

How many professing Christian State Governors – you know, the ones who go to the “right” churches and claim the “right” theology – are there at present presiding over these 50 United States of America?

How many professing Christian County Mayors of the same sort are sprinkled all across the fruited plain?

How many professing Christian County Sheriffs?

And who has actually taken a biblical stand against the lawless tyranny that is now upon us?

Who has stood from among them and done what God has commanded and equipped Christians to do in the face of the sort of lawless tyranny that is now washing over the land and devouring the culture before our lazy, apathetic, unbelieving little deer-in-the-headlights eyes?

In God’s perfect, providential plan laid from before the foundation of the world, He chose her to make this stand in this moment.

Does this make her a Christian?

But it does make her the brightest living example that we have right now of someone actually behaving as a Christian ought to act in the God-given role of magistrate.

So thank God for Kim Davis!

Pray for our land.

Pray for the professing Christians who are in God-given offices of power, that they might repent and believe in action.

Pray that we might see 300…or 100…or 10…or maybe just one or two more who will actually dare to take a stand like the one taken by Kim Davis in Kentucky…all by God’s grace, all for His glory, and all to the great and much needed benefit of His people.