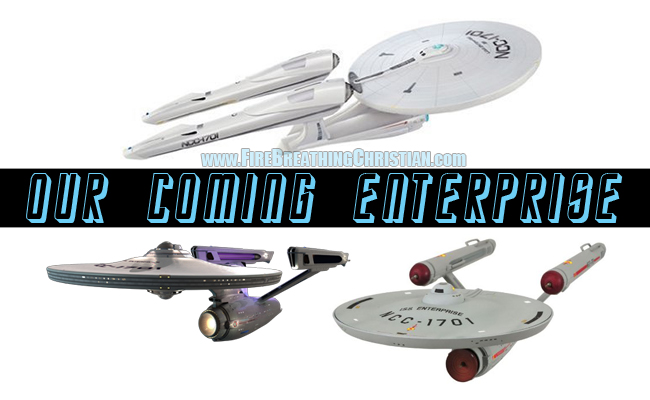 Yesterday’s post (Fear Not: The Future Is Christian) revisited a topic that we just love to touch on here from time to time, that being the awesome future prepared and secured by God in which His supernaturally saved and sanctified people will learn, grow, explore, cultivate, and adventure forever unencumbered by sin in a restored creation. Well over a year ago we started kicking this idea around in some detail in posts like Enterprise, Falcon, or Galactica? What will Christians use to explore the restored cosmos?

What will we do?

Where will we go…and how will we get there?

These kinds of questions are not only a whole lotta fun, but they can have a whole lotta value in reminding us of the beautiful truth that our future in restored physical bodies in a restored physical universe is not only real, but that there are nearly limitless inspiring details that flow from this supercool situation. Our amazing eternal future of exploration, growth, and adventure is not just real in some vague, wishy-washy, “too-good-to-even-begin-to-grasp-so-why-bother” sense. Oh no. Our assured, secured future in Christ and His perfected creation, while infinitely superior and in many ways unimaginable due to the profound differences between the sin-wracked world in which we live and the sin-purged world to come, is still also very real in a vivid, detailed sense that does relate to the world in which we live.

One of the ways in which we’ve tried to encourage biblically sound thought and speculation is through the consideration of future prospects for future Christian dominion over planets beyond earth and galaxies beyond the Milky Way.

Before rolling too much farther down this track, especially since things like technology, science, space travel, and interstellar exploration (sadly) aren’t topics generally associated with a Christian worldview these days, we should probably note that there is such a thing as biblically sound speculation…and that it’s even okay to engage in it. I would argue that beyond merely being “okay”, biblically rooted speculation is vital.

God made us to explore and test all things in His creation by the light of His Nature as revealed in His Word. The more fully we realize that He is the Owner, Definer, and Sustainer of everything (material and immaterial) in His creation (Colossians 1:15-20) and that He has both commanded and equipped His people to take every thought on every subject (and thereby every action in every context) captive to Him (2 Corinthians 10:5), the more deeply we will appreciate and enjoy the fact that things like the exploration and cultivation of His cosmos is definitely “on the table”. With that in mind, thinking about precisely how we might be empowered and equipped to explore and cultivate that cosmos becomes not only a legitimate pursuit, but a thoroughly enjoyable and inspiring one.

With all o’ that noted, I want to share a question that’s come up more than a few times from thoughtful readers who’ve read Enterprise, Falcon, or Galactica? What will Christians use to explore the restored cosmos? and other posts along the same line. That question is: Why would we need spaceships at all?

Variations of this question have usually been presented in a context embracing the revelation of Christ’s resurrected physical body as a model for the bodies that His people will have in the future. The fact that Jesus flies in His new body (Acts 1:9) and has the ability to either teleport or walk through solid walls (or possibly both; see John 20:19) makes plain that His resurrected body is liberated from many significant limitations that bind pre-resurrection people and the bodies in which we live. With this in mind, it seems reasonable to wonder and even ask, as many have in response to the Enterprise, Falcon, or Galactica question, “Why would we need a space ship at all?”

So let’s have some good and proper fun trying to answer it in a biblically coherent manner.

Why would we assume that we will need oxygen or other protections that go along with space travel as we understand it now? Isn’t it possible that we might be able to travel anywhere in our perfected, resurrected bodies without the need of a ship of any kind?

To which I would answer: Sure, that seems like a reasonable possibility based on the (admittedly imprecise) info that we have.

We may well not need a ship at all to travel anywhere we like. But that need – the need to physically get ourselves from one point to another in God’s creation – wasn’t the main reason for my inclination towards a future use for such ships. The primary reason bouncing around in my head had to do with transporting stuff along with us from one place to the other.

The “big thing” in my mind that inspired the hypothetical in question had to do with our someday finding exotic new resources in some far away place and wanting to transport those things to where they are needed most so that we might more effectively cultivate and build in the sinless perfected cosmos that God has given us to…cultivate and build.

Just think about that for a sec. How cool would it be to find amazing new (to us) minerals or usable components of any kind way out there somewhere and another range of incredible new resources way out somewhere else, and then have both the noble motivation and technological ability to bring those far flung resources together in order to pursue and craft even more beautiful, productive, and – above all else – God-glorifying creations?

Think of the possibilities.

Think of the unending adventure.

Think of the awe-inspiring exploration.

Think of the eternal improvement and true progress of God’s people in such a setting.

Think of the jaw-dropping and never-ending discoveries telling us more and more and more about God by the manner in which His Nature is purposefully reflected and revealed in His creation.

Sure, there is much speculation here. Much of it is fantastic. But none of it is necessarily false, baseless, or wrong.

Whether we end up needing or even wanting anything remotely resembling the Enterprise, Galactica, or Millennium Falcon is not the point. Not at all.

The point is that, all by God’s grace and for His glory, we have an eternal adventure of great purpose and ever-increasing progress ahead of us – something far beyond the greatest of fantasy or sci-fi works ever dreamt of in the minds of mortal men on this side of eternity.

How’s that for the ultimate in non-fiction fantasy?