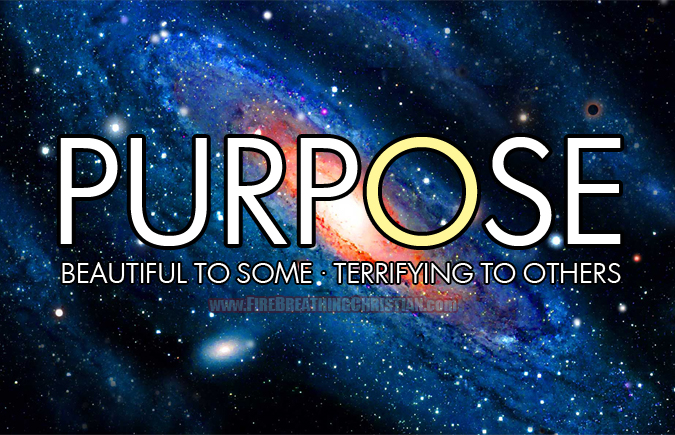 Yes, everything is purposeful.

And that shouldn’t necessarily make us all comfortable.

It is certainly true that everything – every thought, act, consequence and benefit to ever occur anywhere at any time in God’s creation – is perfectly ordained by Him to accomplish His purposes. There is not, as RC Sproul is known for saying, “one single solitary maverick molecule in all of creation”.

This is a matchless comfort to the supernaturally saved and transformed New Creature in Christ.

But the fact of God’s sovereignty and the purpose of all that happens in His creation can also be the ultimate terror for the unrepentant unbeliever, including many false converts who claim Christ with their lips but have no appetite for His Word in detail and in practice.

When anyone (including ourselves) plays the “God is in control” or “everything has a purpose” card as a way of avoiding pursuit or application of the Nature of God as revealed in His Word on any given subject, they (or we) are demonstrating unbelief. In our apathetic, lazy approach to the revealed Nature of the Lord we claim to love in word, we are demonstrating faithlessness to Him in deed.

To help get beyond lazily relaxing in an inappropriate way in the comfort of God’s sovereignty and purpose for all of His creation, let’s look at a very popular partial verse dealing with the good goal behind all things in God’s creation:

So we see that the good work being accomplished by all things is “good” for a very specific group of people. As in: Not necessarily for everyone.

Now let’s include surrounding verses for some essential (and generally unpopular) context:

Now let’s add in an even more clarifying (some would say excruciatingly so) related passage from the next chapter, Romans 9:

But it is not as though the word of God has failed. For not all who are descended from Israel belong to Israel, and not all are children of Abraham because they are his offspring, but “Through Isaac shall your offspring be named.” This means that it is not the children of the flesh who are the children of God, but the children of the promise are counted as offspring. For this is what the promise said: “About this time next year I will return, and Sarah shall have a son.” And not only so, but also when Rebekah had conceived children by one man, our forefather Isaac, though they were not yet born and had done nothing either good or bad—in order that God’s purpose of election might continue, not because of works but because of him who calls—she was told, “The older will serve the younger.” As it is written, “Jacob I loved, but Esau I hated.”

What shall we say then? Is there injustice on God’s part? By no means! For he says to Moses, “I will have mercy on whom I have mercy, and I will have compassion on whom I have compassion.” So then it depends not on human will or exertion, but on God, who has mercy. For the Scripture says to Pharaoh, “For this very purpose I have raised you up, that I might show my power in you, and that my name might be proclaimed in all the earth.” So then he has mercy on whomever he wills, and he hardens whomever he wills.

You will say to me then, “Why does he still find fault? For who can resist his will?” But who are you, O man, to answer back to God? Will what is molded say to its molder, “Why have you made me like this?” Has the potter no right over the clay, to make out of the same lump one vessel for honorable use and another for dishonorable use? What if God, desiring to show his wrath and to make known his power, has endured with much patience vessels of wrath prepared for destruction, in order to make known the riches of his glory for vessels of mercy, which he has prepared beforehand for glory—even us whom he has called, not from the Jews only but also from the Gentiles?

Yes, everything and everyone has purpose.

Everyone refusing to repent and submit to Christ as King in practice will be perfectly used by Him anyway to accomplish His purpose.

Knowing this truth while refusing to pursue and apply His Nature as revealed in His Word is not a beautiful thing.

It’s a terrifying one.