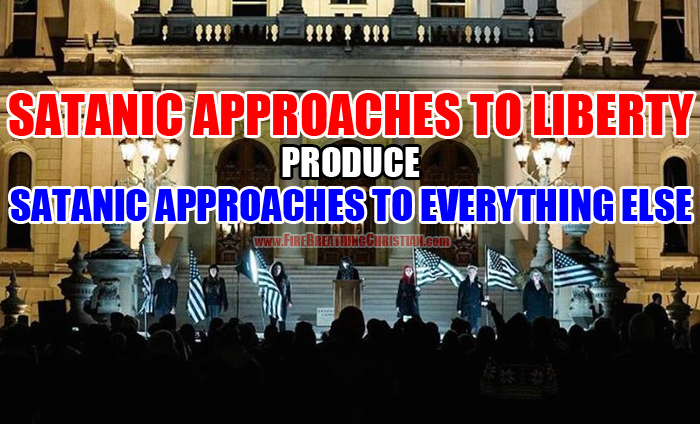 Right now, before our unbelieving eyes, whether we want to see it or not or whether we understand what we’re seeing or not, the one true God is crushing the world’s greatest advocate for a satanic approach to liberty under His heel. God is grinding America into dust.

Put another way: America is breaking itself to pieces against the unbreakable Nature of God.

Even so, God will use and is using America perfectly to demonstrate the unbreakable beauty of His Word, Law and Nature. While American pride and arrogance may shine bright in the eyes of many right up until the final bitter end, ultimately even those who cling to the America idol and refuse to have Christ rule over them in practice will ultimately see the incalculable error of their ways.

In the meantime, we are being graciously shown much – we are being lovingly provided with ample warning and reason for repentance – by the God against Whom America has so proudly raged for so very long.

One of the more flagrant signs being offered up in full view and on daily parade in “the land of the free” is the open worship of Satan and the proud, excruciatingly public advance of explicitly satanic forces throughout American cultural and political realms.

The piece as published by The Conversation offers a plethora of simple facts about recent and present day America that would have been dismissed as impossible just a generation ago by the “good conservatives” who even today defend the very America Idol that not only makes these satanic advances possible, but assured.

The article opens by giving us a good solid look at how our approach to “freedom” in art, business, and politics is coming together to craft a very dark, very unhinged, and very destructive America:

Robert Eggers’ period horror film “The Witch” has been one of the surprise hits of 2016. It’s even gained a second wind since its February 23 release: the first weekend of April it played on 666 screens around the country, raking in an additional USD$465,000.

The tale of a Puritan family turning on each other as they attempt to root out the supernatural evil plaguing their farm, the film won Eggers the award for best director at Sundance – and even frightened horror master Stephen King.

But neither of these accolades has generated as much buzz as an endorsement from The Satanic Temple (TST), a satanic political movement that first appeared in 2013.

A “satanic political movement” here in ‘Merica, huh? Well, yeah, that makes perfect sense if you stop to think about it for more than a nanosecond or two. Any culture claiming the freedom and “God-given ‘right'” to openly worship any god one likes is clearly a culture embracing and advancing a satanic approach to religious liberty and life in practice.

How could such a thing not lead to open Satanism eventually rising to political power?

Since its founding, TST has waged a highly active campaign to demand greater separation between church and state, and to challenge the privileged relationship Christianity has with government.

A cornerstone of their campaign has been tongue-in-cheek “stunts” intended to show how government institutions favor Christianity in ways that would never be tolerated for other religions.

TST first made headlines in 2013, when it held a rally in Florida, ostensibly to congratulate Governor Rick Scott for passing a bill that would allow students to read “inspirational messages of their choosing” at assemblies and sporting events.

While Scott probably envisioned the law permitting Christian students to offer public prayers and Bible readings, it could not, constitutionally, specify what sort of “inspirational messsages” were allowed – including satanic messages. And so the rally featured a sign declaring, “Hail Satan! Hail Rick Scott!”

When one refuses – as America refuses – to define and pursue religious liberty as revealed in God’s unbreakable Word, this is what you end up with.

In this, we should thank God for the clarity He is providing through these Satanists.

He is showing us far more than we should ever need to know to repent of the America Idol’s satanic approach to religious freedom…but “We the People” don’t seem very close to doing that, do we?

We seem to be willing to do anything but repent and submit to Christ as King in practice in the political, legal, and civil governmental realms, so…He is continuing to grind us under His heel.

The Conversation article went on to chronicle some of the great and very public strides taken by this satanic political movement in just the last few years:

TST chapters across the country have launched campaigns demanding the same religious rights and privileges afforded to Christianity.

These have included the creation of satanic coloring books for distribution in schools in Florida and Colorado; bids to erect satanic “nativity scenes” on government property in Florida, Michigan and Indiana; offering prayers to Satan at a high school football game in Seattle; and demanding that a monument to the Ten Commandments at the Oklahoma State Capitol be accompanied by a monument to Baphomet (a goat-headed idol associated with witches’ sabbaths).

The article then transitioned back into the tie-in between the movement and “The Witch”:

Following [a promotional screening of “The Witch”], everyone migrated to a bar and music venue called The Sidewinder, where TST held their ritual. Members from the Detroit and San Antonio chapters began setting up and handing out satanic American flags painted in only black and white. I mingled with a small crowd of Satanic sympathizers and the curious. Leather jackets, tattoos and pentagrams were in abundance.

And what could be more American than that?

Now back to the article…:

Owens had been warning that Satan uses people’s pride and selfish desires against them, but the ritual imposed its own interpretation onto his message: To TST, Satan represents moral autonomy and personal responsibility.

Blackmore eventually appeared from beneath a hood and took to a podium to deliver what can only be described as a “satanic jeremiad.” She warned that Christian theocrats were taking over America and that those present – atheists, satanists, fans of heavy metal and punk music – were allowing it to happen: “There’s too much apathy and not enough resistance!”

She told the audience, “We do not seek followers, but collaborators.”

Afterward I spoke with some young people from the crowd. One explained that he was attracted to Satanism because “It’s about knowledge,” not dogma.

Another, Jonathan – who identified as a witch – seemed the most likely to be sympathetic to TST’s politics. He said that when he attended high school in Virginia Beach, his classmates targeted him for openly identifying as a Pagan. Someone even pretended to be him and called in bomb threats to his school. The events attracted the attention of Detective Don Rimer, a notorious “occult crime expert,” who confiscated all of Jonathan’s books on witchcraft as evidence. There was an attempt to forcibly commit Jonathan to a mental institution.

I asked Jonathan if he thought TST was really a religion.

“Definitely,” he said, “Some people treat Christianity as a hobby. But no one thinks it’s not a real religion.”

The self-identified witch is right. America is all about “hobby Christianity”.

Americans – including most professing conservative Christian Americans – are all about claiming Christ in word wile openly rejecting Him as Lord over them in political, legal, economic, artistic and educational practice.

These Satanists are merely the latest entirely predictable manifestation of God’s judgment upon America.

These Satanists are merely the latest fruit of American Christianity.

May God grace His people with the desire to repent of America idolatry so that we might seek and apply His Word as the living standard by which all things – including law, economics, civil government and education – are to be defined and pursued…while there is yet time.