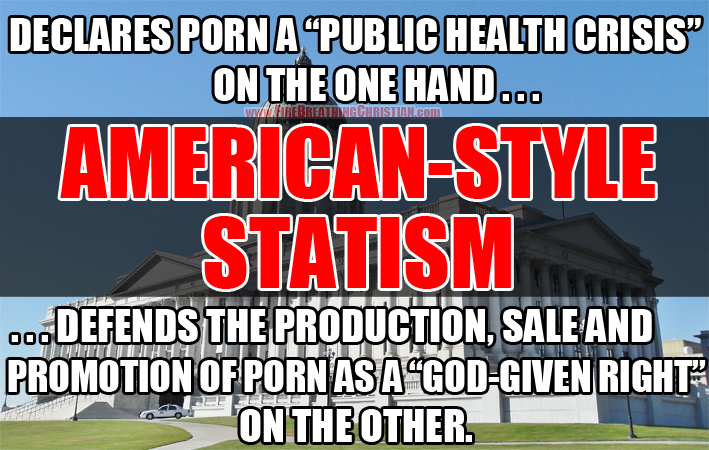 On the plus side: Utah has declared pornography to be “a public health crisis”.

The gigantic, flaming, neon-lit problem that will be religiously avoided by pretty much everyone else covering this story, I mean?

As reported by KSL, Utah has become first state to declare pornography a public health crisis. Here are some samples from the article, with bold emphasis added and a few added comments made in red:

Utah became the first state in the country to declare pornography a public health crisis, and called on the industry and businesses Tuesday to help keep “evil, degrading, addictive” materials away from children. Gov. Gary Herbert signed a resolution the state Legislature unanimously passed earlier this year calling for education, prevention, research and policy changes to address the pornography “epidemic.””We realize this is a bold assertion,” the governor said, acknowledging some would disagree that it has become a health crisis. “It is, in fact, the full-fledged truth.”

. . .  Weiler also called on the multibillion dollar pornography industry to “help us protect children from your evil, degrading, addictive harmful substances. If adults want to do that, that’s their choice.”

Not in a “land of the free” where the American State and its top tier icons and idols trump Scripture without a second thought even in the minds of most professing Christians in the land.

Just try to suggest that the Founding Fathers might have gotten anything meaningful wrong in their approach to crafting the Constitution and you will get ten times the passionate pushback from ten times the “Christian Americans” as you will get if you suggest that the Bible needs to be interpreted and applied by the light of the Founders and Constitution rather than the other way around.

This is why nothing’s working, people.

This is why it’s getting darker and darker in America.

After many fat years of phony prosperity and contrived comfort, the long term fruit of our long-running America Idolatry is finally coming home to roost. The judgment of God is upon us in many forms, including “conservative Christian” leaders who are as committed as any Muslim, witch or Satanist to avoiding the Word of God as our standard in law and life.

Even though we see so clearly the fruits of a satanic approach to “freedom” and an anti-Christ spin on “liberty”, we refuse to address their root cause by repenting and submitting to Christ as King in practice. We’re way too proud and way too American for that kind of thing.