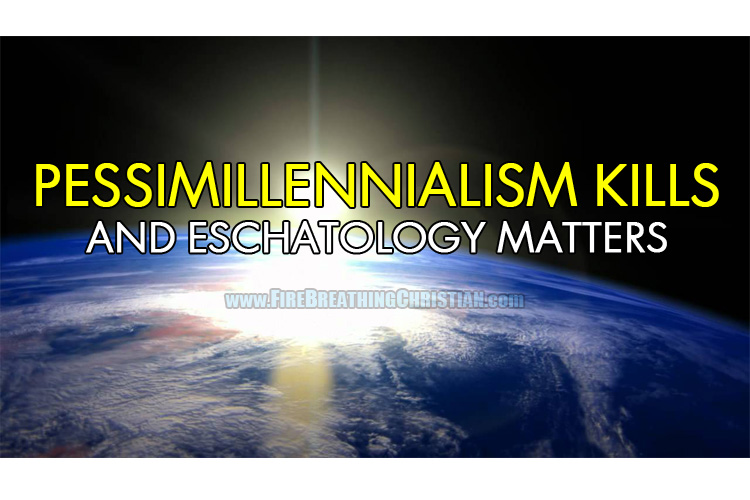 How we view the future dramatically impacts how we conduct ourselves in the present.

Is the culture destined to go to hell? Is the plunge of humanity into increasing darkness unstoppable? Is the complete death of culture and civilization inevitable?

Or is the Gospel-fueled Great Commission actually going to accomplish what it aims to accomplish? Are God’s people by His grace filled with His Spirit in accordance with His Word really, truly, and actually going to, over time in His creation in application of His Great Comission, gradually take every thought and thereby every action in every realm of life captive to Christ, reconciling all things to Him by the power of His work on the cross? (See: 2 Corinthians 10:5; Colossians 1:15-20; and Matthew 28:18-20.)

Does the devil have the authority to hold, much less legitimately rule over, any territory here and now on God’s earth? Or has all authority on earth been given (that’s past tense there) to Christ in accordance with His Great Commission proclamation? (Again: See Matthew 28:18-20.)

Does the Spirit of God – the third Person of the Trinity – actually live within God’s physical people right here and now on His physical earth? Are they not really and truly the Body of Christ here on His earth to do His will, apply His everything-touching Gospel, and advance His Great Commission, making disciples of all the nations and seeing to it that His will is done on earth as it is in heaven?

Or is none of that really, literally true here in the physical world?

Put another ‘nother way: Pessimillennialism kills…and has been in the process of helping to kill America for a very, very long time.

Along these lines, The Week recently posted an article entitled Dear Hillary… in which Damon Linker warns and wonders concerning Hillary Clinton’s prospects against The Donald in November. While much of what Linker has to say isn’t particularly interesting or informative, there was a line in his piece that stood out.

. . . If conservatives are prone to nostalgia, the left is inspired by eschatological hopes for the future. . .

And there, ladies and gentleman, is something to think about.

I mean really think about.

They know that by vigorous application of their worldview in every area of life, those areas of life and culture will be moved in their direction.

So they live and work accordingly.

They live and work in accordance with their gospel.

The Pilgrims and Puritans that American Christian conservatives love to cite and fawn over in a vague, general, idolatrous sense came here in the first place because of a victorious eschatological belief in the life-, culture-, and civilization-transforming power of the Gospel-fueled Great Commission right here and now.

While American Christians have long abandoned and now openly ridicule such a worldview, they still clamor and claim to want the fruits of that worldview. They ridiculously blather on and on about “returning to the roots and values of our forefathers” while openly repudiating the victorious Gospel worldview of the Pilgrims and Puritans who started the “American experiment” in the first place.

Now it’s mainly liberals, progressives, and leftists who appreciate and enjoy a victorious, optimistic eschatology…and now it is they who are winning the territory long abandoned by the fear, faithlessness, and pessimism of American evangelicals.

Maybe the Pilgrims and Puritans who came over here way back when were on to something.

Maybe they really did make a serious, lasting positive impact on culture and civilization…an impact that we’ve been enjoying while lazily neglecting (and openly assaulting) its foundations for generations now.

Maybe they actually moved things in a meaningful positive direction and set up future generations to continue to do the same.

Maybe we should repent, believe, and find the supernatural, God-given, Gospel-inspired optimism that fueled the Christians that came over here in the first place and radically impacted the world for good.