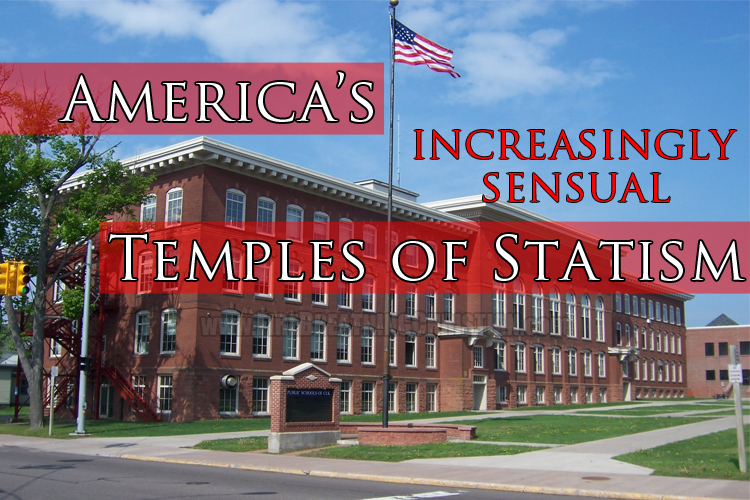 It’s the State’s job to educate our children.

It’s the State’s job to discipline our children.

It’s the State’s job to raise our children.

It’s the State’s job to form the minds and worldviews of our children.

This installment of What Will It Take For Americans To Repent Of State-Run Satanic ‘Education’ comes by way of a Fox News article entitled Teen girl filmed having sex with 2 dozen football players in school bathroom, which provided the following lovely details as to what’s a-goin’ on these days with “the kids” in Uncle Sam’s increasingly sensual Temples of Statism:

FORT MYERS, Fla. – Students and parents are in shock after a group of teenagers had sex in a high school bathroom in Fort Myers, Florida, and then posted a video of the act on social media.

A teenage girl had sex with as many as two dozen boys after school Tuesday afternoon at South Fort Myers High School, according to a Lee County Sheriff’s Office incident report.

Deputies said 25 males were spotted via a hallway camera entering the restroom while the female was inside, the News-Press reported.

“The fact that that could’ve happened is just crazy in my mind,” another student said.

Parent Megan Roldan said the incident proves some parents need to be more aware of what their children are getting up to when school ends.

“And apparently, obviously the parents need to be talking to their kids more,” Roldan told WINK. “And being aware of what their children are doing after school.”

Even though the incident happened after hours, some students are wondering where the administration was when all of this was going on.

. . . Some parents question how this could have happened at the school.

“Well, they should be walking around the halls and things like that and know where the kids are,” Roldan said.

Now factor this in: Most of the self-described conservative Christian parents involved are very likely to be voting in November for a proud, unrepentant, regularly wife-upgrading and openly strip-club promoting man for President.

But of course that doesn’t matter ’cause this is ‘Merica, the “land of the free” to do whatever We the People decide is right at any given moment on any given subject without feeling any shame or compulsion to submit to the clearly revealed Word of Christ as though He was actually King or something.

There is more than one way to sacrifice a child. And a nation.

America seems hell-bent on perfecting them all.